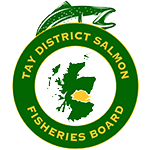 The Tay District Salmon Fisheries Board is the statutory body empowered to protect and improve the salmon fisheries in the Tay district. This means looking after not just Atlantic salmon and sea trout but the River Tay system as a whole, this includes river management, conservation, scientific research and bailiffing.

The Tay distirct has been working to remove invasive species for a number of year, through the Tay Foundation. Survey work was initially undertaken in 2006 to assess the extent of the problem and define areas of priority for work. This included partnering with the RAFTS project in 2010 to control Japanese knotweed on the River Earn. Large sections of riverbank were sprayed between Aberuthven and Crieff.

The Board is now working in partnership with the Scottish Invasive Species Initiative to control invasive plants throughout the northern and eastern part of the Tay system, (Upper River Tay, River Tummel, River Garry, River Isla, River Ericht catchments). Target species for control are predominately Himalayan balsam, some Japanese knotweed and also localised sites of Giant hogweed. American mink is also being controlled.