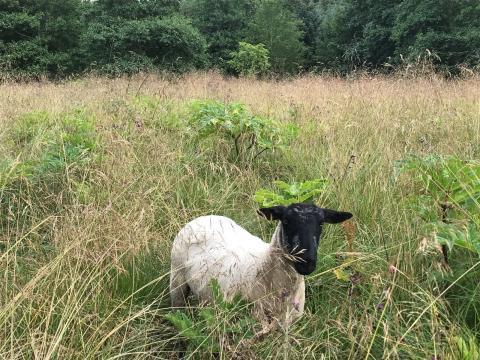 A new woolly weapon is being deployed in the battle against Giant hogweed in Macduff this week as part of trial works by the Scottish Invasive Species Initiative.

The flock of two dozen sheep will be introduced into a strip of woodland, upriver of the Macduff distillery, which is overrun with the invasive Giant hogweed plant.  Reaching heights of 2-3m, Giant hogweed not only causes harm to our native wildlife by dominating sites and shading out native vegetation, but its sap is harmful to people and can cause serious and painful burns on contact with the skin.

The established method of controlling Giant hogweed is to use a chemical, but in such dense infestations as the Macduff site, and where the plants are interspersed within trees, it makes treatment difficult.  However, following an encouraging ongoing trial by the Deveron, Bogie & Isla Rivers Charitable Trust, which began in 2013, grazing by sheep is being further investigated as a viable alternative. The sheep suffer no ill-effects from the toxic sap and develop a taste for the plant, happily grazing it alongside other vegetation.

Al Reeve, Scottish Invasive Species Initiative Project Officer, said; “This a new trial site that we have established with Dan Gordon of Kirkside Farm and Wrack Fishings - who have been really supportive in working in partnership with us to establish this trial. We’ve been working for several years treating this area with pesticides in our efforts to control the hogweed and we are hopeful that the sheep will provide a more efficient and environmentally friendly solution. The woodland alongside the River Deveron has been fenced in and we will be introducing the sheep this week.”

“We know that this is a popular path for dog walkers and so we really need the support of the Macduff and Banff communities whilst the trial is running.  In particular we ask that people remember there are now sheep in this woodland and act accordingly by keeping their dogs on a lead and closing the gates behind them.  The path is still open for use.”

Signage will also be placed at the entrances to the trial site, which is the 1km strip of woodland to the south of the Macduff distillery, along the right bank of the River Deveron, opposite the Banff golf course.

The grazing trial is part of the Scottish Invasive Species Initiative (SISI), an ambitious 4-year project led by Scottish Natural Heritage and funded by the National Lottery Heritage Fund, which is working across northern Scotland to tackle the problem of Invasive Non-Native Species.  Project Manager Callum Sinclair explained: “The project is tackling several key invasive non-native plant species commonly found along river banks namely Giant hogweed, Japanese knotweed and Himalayan balsam.  One of our aims is to develop sustainable methods of managing invasive species, if the sheep prove to be successful at eradicating giant hogweed this could be a huge step forward for the management of the species across Scotland.

“SISI is also about providing support and building the skills of individuals and communities in the fight against these invasive species.  To do that we will be providing a range of volunteering opportunities across the project area – we are really pleased to have recruited these sheep volunteers to the scheme and look forward to working with them in the future.”

Local opportunities will be available later in the year to find out more about the sheep and hogweed trial. If anyone would like any further information in the meantime they are welcome to contact local project officer, Al Reeve, on [email protected] or 07483 319448.