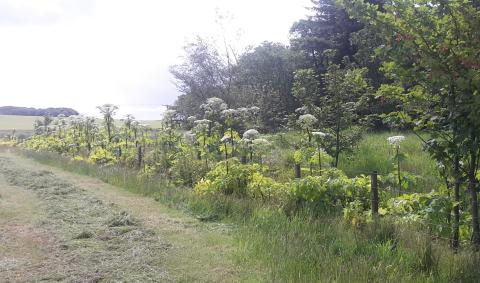 Working with landowners and volunteers, the Scottish Invasive Species Initiative managed giant hogweed control at this site from 2018-2021. Approximately 2.2km of river length was covered, totalling 4.4km of riverbank.  This work has significantly reduced the abundance of giant hogweed on the site and, consequently, the time and chemical volume necessary for annual control.

In 2022, the Scottish Invasive Species Initiative intends to discuss the handover of management at the site to local landowners so that control can continue there after the project ends in October 2022. Project staff will continue to monitor the site and provide advice and support when needed. Encouraging progress has been made but monitoring and control work will be needed for several years to eradicate the plant, exhaust the seedbank at the site and prevent further spread of seeds downstream into the South Ugie Water.

The Stuartfield Burn site is a 2.2km stretch of burn running through Stuartfield village in Aberdeenshire (see Map 1 below).  Land use is varied along the banks and includes residential gardens, pastures, unimproved grassland and conifer plantation.

The upper limit of the site starts above West Knock Farm (grid reference: NJ 98144 45195) and ends at the confluence with the South Ugie Water (grid reference: NJ 97910 46830).  Ownership is shared by a number of individuals - with no single owner having overall responsibility of the site.  In total, giant hogweed has been controlled on approximately 4.4km of riverbank, covering both banks of the 2.2km river section.

Within the Scottish Invasive Species Initiative partnership, the Ugie catchment is covered by the Deveron, Bogie and Isla Rivers Charitable Trust. 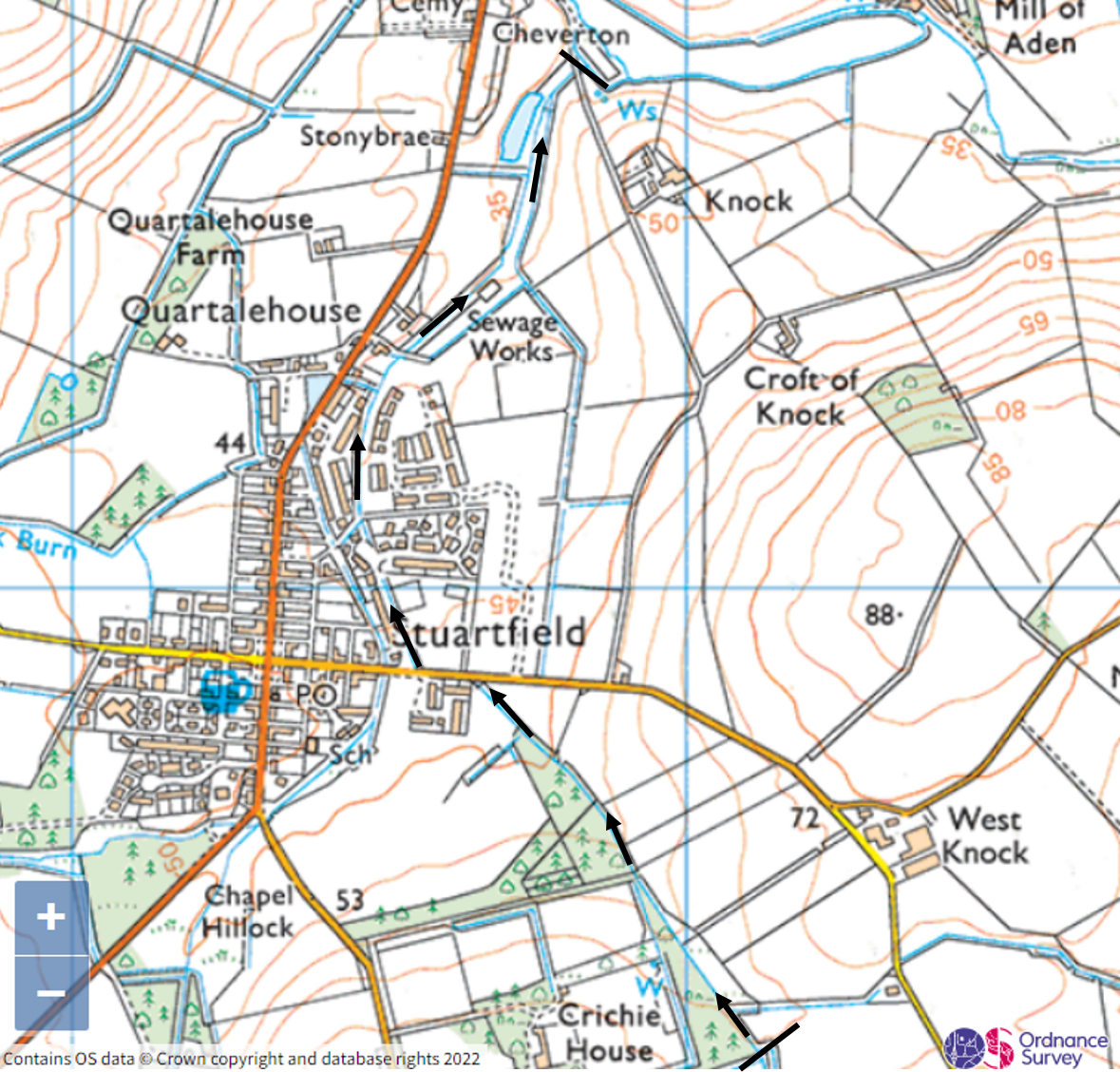 This site marks the uppermost extent of giant hogweed on the Stuartfield Burn and is one of the key seed sources for the South Ugie Water. The origin of the plant is unknown but it may historically have escaped from a garden and/or been spread by agricultural activities.  It is now present at a number of locations downstream and is well established in the catchment.

The Stuartfield Burn site was identified for control by the Scottish Invasive Species Initiative in 2018 and the site was further extended upstream in 2019.  At that time giant hogweed was present throughout the site - being the most abundant species in some areas and growing alongside native vegetation elsewhere.  In the worst areas, giant hogweed was successfully outcompeting other ground flora and leaving banks vulnerable to erosion when winter die back exposed bare soil.  If left untreated the plant was likely to become dominant in already established locations and spread further downstream to less affected areas.

After the Scottish Invasive Species Initiative alerted them to the issue - highlighting the importance of tackling infestations and preventing further spread downstream - two major landowners agreed to work with the project to control plants on their land.  In other areas, initial control was carried out by project staff and volunteers.

Giant hogweed was first treated on the site in 2018, followed by annual control in 2019, 2020 and 2021. Initially, control started one pasture above Stuartfield village and continued downstream to the confluence with the South Ugie Water.  In 2019, additional giant hogweed plants were found further upstream and so the site boundary was extended to include these.  The landowner was alerted to the discovery and agreed to carry out control.

Two control methods were used - foliar spraying and manual cutting of flowering heads to prevent seeding. Manual cutting was combined with herbicide application (to remaining leaves and into hollow stem) to prevent regrowth.  In 2021, after three years of control, no giant hogweed plants reached the flowering stage and control could be carried out by foliar spray alone. Table 1 (below) shows a summary of the control treatments.

Before control work, the abundance of giant hogweed was either ‘dominant’, ‘abundant’ or ‘frequent’. Following 2 or 3 years of treatment in 2018, 2019 and 2020, a reduction in abundance was observed at all monitoring points. By 2021 abundance had reduced to ‘frequent’, ‘occasional’ or ‘rare’ at the monitoring points, with only one bank at one monitoring point showing ‘abundant’ due to the existing seedbank. This is shown by the recorded abundances in Table 2 at monitoring points and fixed-point photography at each site (see Figures 1a, 1b, 2a and 2b below).

In each year of treatment glyphosate (RoundUp Provantage 480mg/l) was applied by knapsack sprayer at a concentration of 20ml per litre. The volume of glyphosate used per year is shown in Table 3 below.

The increase in glyphosate used in 2019 was due to the discovery and treatment of a new area. Following this, chemical volume decreased each year.

Control work was carried out by landowners and by Scottish Invasive Species Initiative staff and volunteers. Table 4 (below) shows the people hours required to control giant hogweed each year.  The increase in hours spent on control in 2019 was due to the new area of giant hogweed that was discovered and treated in that year - this area was not part of the work programme in 2018.

Control measures taken along the Stuartfield Burn since 2018 have reduced giant hogweed abundance at the site and the time and chemical volume required for annual control.

A significant reduction in abundance was observed at the monitoring sites from 2018 to 2021 (see Table 2 and Figures 1a, 1b, 2a and 2b). Giant hogweed was recorded at the majority of sites as ‘rare’, ‘frequent’ or ‘occasional’ in 2021, following annual control since 2018/2019 when it was recorded as ’dominant’, ‘abundant’ or ‘frequent’.

This is positive progress but control will be required at the site for a number of years to further reduce abundance of the plant and exhaust the extensive seedbank.  Ongoing efforts will prevent flowering plants adding to the seedbank and spreading additional seeds further downstream and into the South Ugie Water where treatment is ongoing at other sites.  Promising recolonization of native flora has been observed in many of the sites which will hopefully help to suppress the emergence and growth of any giant hogweed seedlings.

Giant hogweed seedlings will emerge at the Stuartfield Burn site in 2022, and in subsequent years, due to the persistent seedbank in the soil.  For progress to continue at this site, annual control and monitoring will be required to prevent giant hogweed plants maturing and setting and dispersing seeds, as this would  replenish the seedbank and further spread giant hogweed downstream.  In time, with consistent control effort, the existing seedbank will be diminished and then exhausted at the site.

In 2022, the site will be monitored by project staff but the intention is that control will mostly be carried out by local land owners and managers - now that this work is of a more manageable scale after control by the project.  This transition and transfer of management responsibility will allow future giant hogweed control work to target sites downstream in the knowledge that the Stuartfield Burn will be controlled by relevant land managers.

Project staff will initiate discussions with landowners and managers to formalise this handover.  Securing these agreements will be essential to safeguard the progress made at this site as the Scottish Invasive Species Initiative is due to end in October 2022. Furthermore, effective control and landowner agreements downstream are likely to depend on assurances that upstream sources of giant hogweed are being actively managed and controlled.