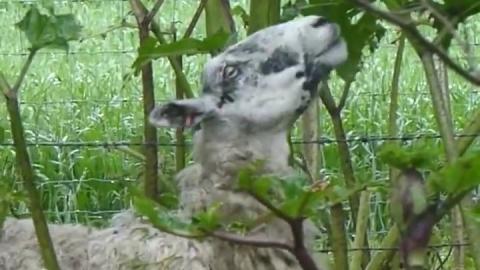 Can sheep be used as a form of chemical-free, low intensity giant hogweed control?

This trial is a practical experiment to investigate how best land managers could use sheep to control substantial giant hogweed (Heracleum mantegazzianum) infestations – in this case in a woodland site. Where giant hogweed has taken over in an area it can be difficult, time consuming over a number of years and expensive to tackle the problem and normally requires the use of herbicides. This trial is assessing the opportunity of using sheep to control hogweed at a site near Macduff at the bottom of the River Deveron catchment.

In our first year (2019) we found that sheep did a fantastic job in controlling hogweed but there were signs that areas were overgrazed leaving bare patches which could encourage more or new hogweed growth. In 2020, we halved the number of sheep grazing the site but found that while hogweed control was maintained some overgrazing was still present.  In 2021, grazing pressure was further reduced, by utilising the same number of sheep as in 2020 but reducing the time spent grazing on site. This resulted in effective giant hogweed control while minimising detrimental impacts on other ground flora. In 2022 we will maintain the same grazing pressure as in 2021 and continue to monitor the effect of this, both in terms of maintaining effective hogweed control and on other vegetation present.

A previous sheep grazing trial, by the Deveron, Bogie and Isla Rivers Charitable Trust at Auldtown (near Huntly) in 2013, showed that in a controlled environment, sheep successfully grazed and controlled giant hogweed in an infested field with no ill-effects to the sheep.

In this trial near Macduff in Aberdeenshire we are working in partnership with a local farmer and the University of Aberdeen.  In the site, which is a 1km (7 hectare) stretch of woodland sandwiched between arable fields and the River Deveron, giant hogweed has begun dominating the woodland, particularly around the sunnier edges, and along the numerous streams that flow through the wood to the river (figure 1.).  Past attempts to control giant hogweed via herbicide application using a knapsack sprayer have proved time consuming, costly and ineffective – largely due to the scale of infestation and the difficult terrain of the site.

We hope to demonstrate that sheep can be efficient and effective means of controlling hogweed, requiring minimal attention during spring and summer months, and which can remove the reliance on ongoing and costly chemical control. 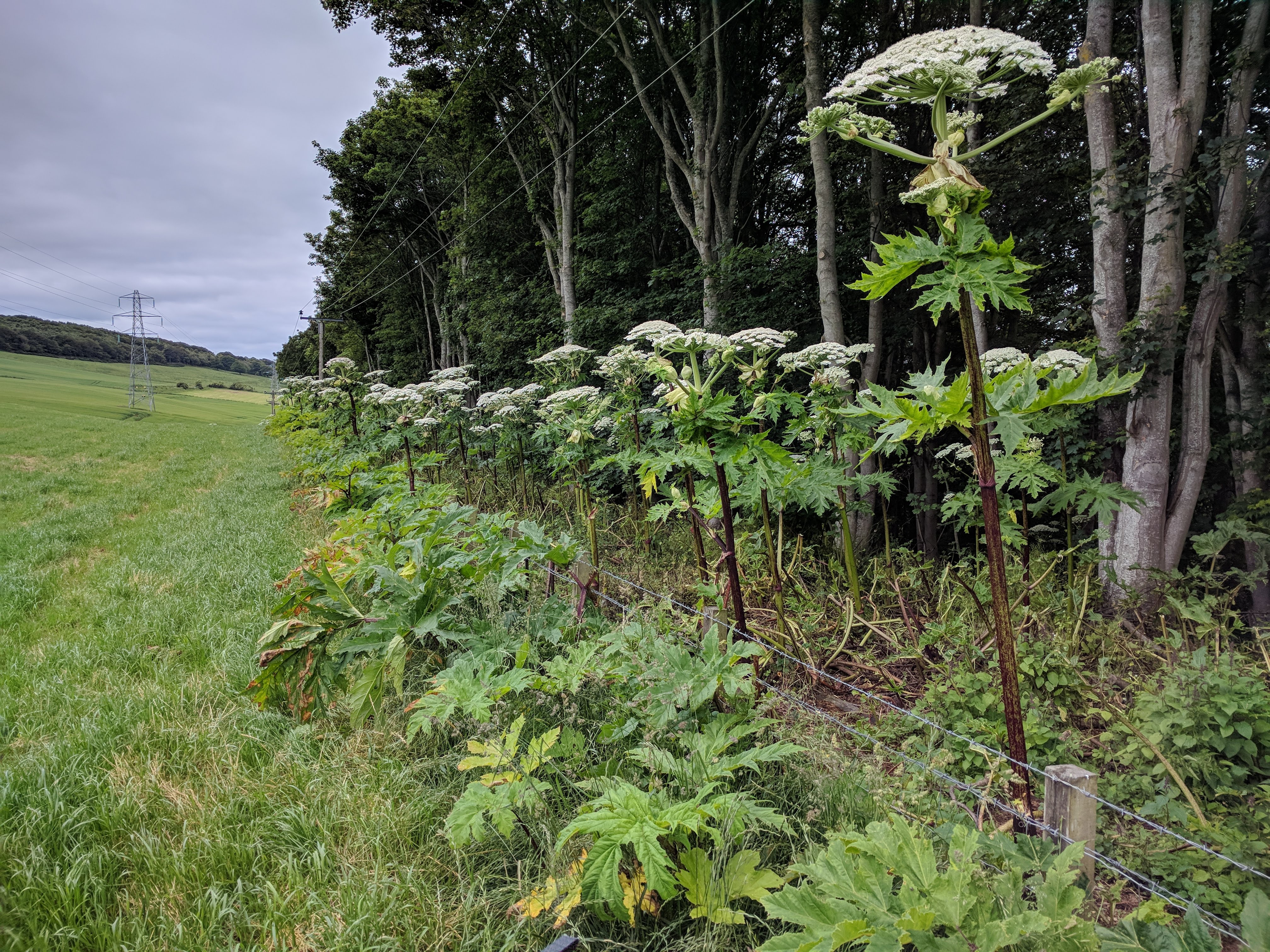 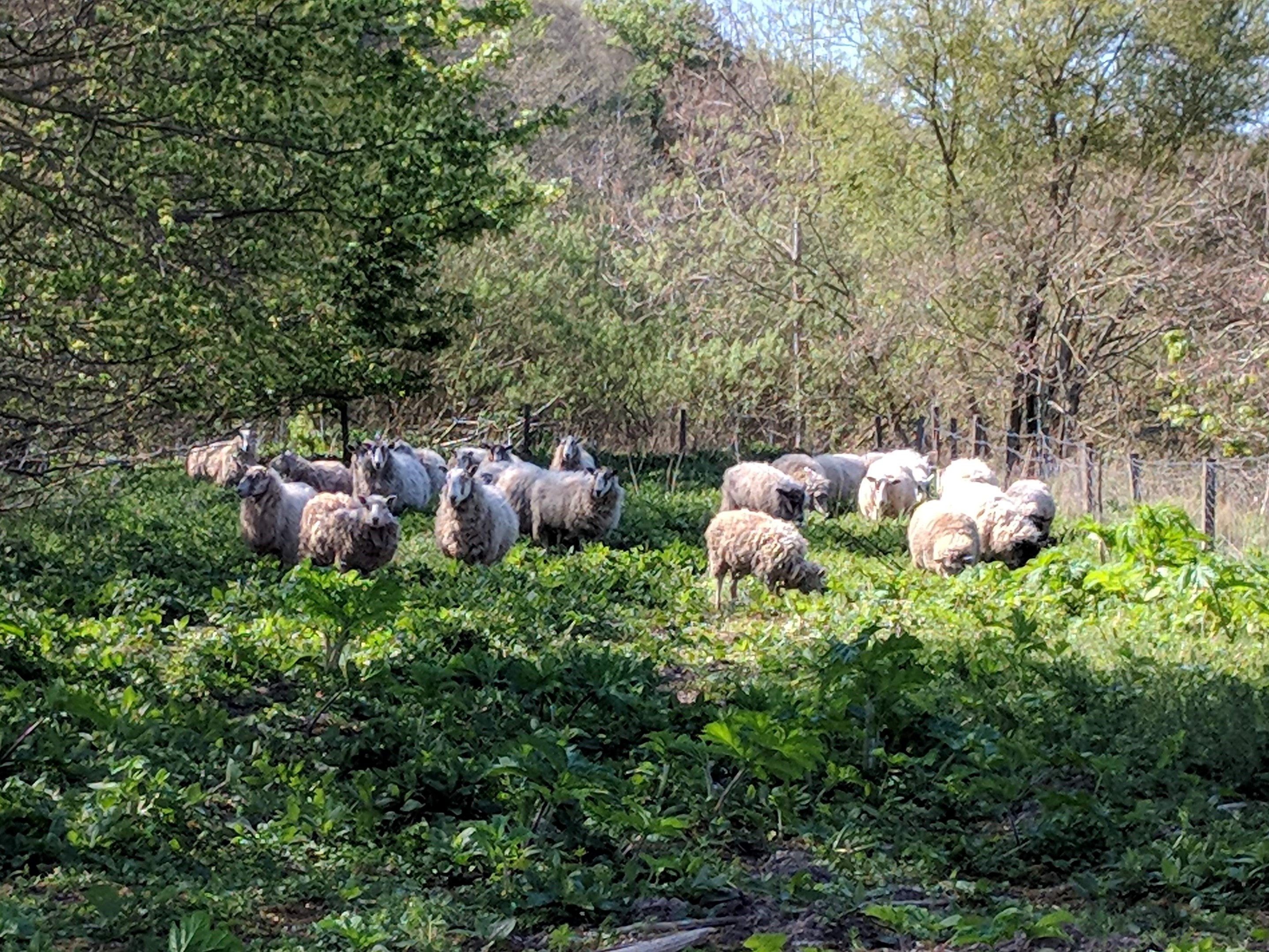 After fencing the site in April 2019, 25 sheep were released into the woodland area in April and, after asking dog walkers to keep their dogs on leads, we waited to see what would happen… and for the first month, nothing did! The sheep lazed around the entrance to the site, maybe due to the new environment or maybe because they had never eaten anything other than grass before (figure 2) and the new hogweed option on the menu took a little bit of getting used to.

During this time, with the University of Aberdeen, we identified 42 monitoring plots to measure the effect of the sheep on giant hogweed, and a further 28 plots where we measure the effect of the sheep on the rest of the woodland vegetation community (figure 3).  We record ‘sheep grazing days’ to measure grazing effort in each year and to allow us to compare grazing pressure across years and in relation to both the hogweed and vegetation monitoring results.  We also gathered drone footage in the autumn to view the infestation from above.

As 2019 progressed, we started to see indications that the sheep were growing in confidence and becoming familiar with the site. Clear trails were developing through the wood showing where the sheep had been walking and we noted a few nibbled hogweed stems. A couple of months later, and the sheep had well and truly gained a taste for the hogweed now on the menu (figure 4). The sheep were taken off the site at the beginning of November.

In 2020 the sheep got straight to work grazing on the hogweed when released to the site in April. The overall number of sheep days during 2020 (2476 days) was just under half (49%) of that of 2019 (5076 days). We repeated the vegetation surveys, giant hogweed plot monitoring and the drone flight in 2020. The sheep were taken off the site in the beginning of September. 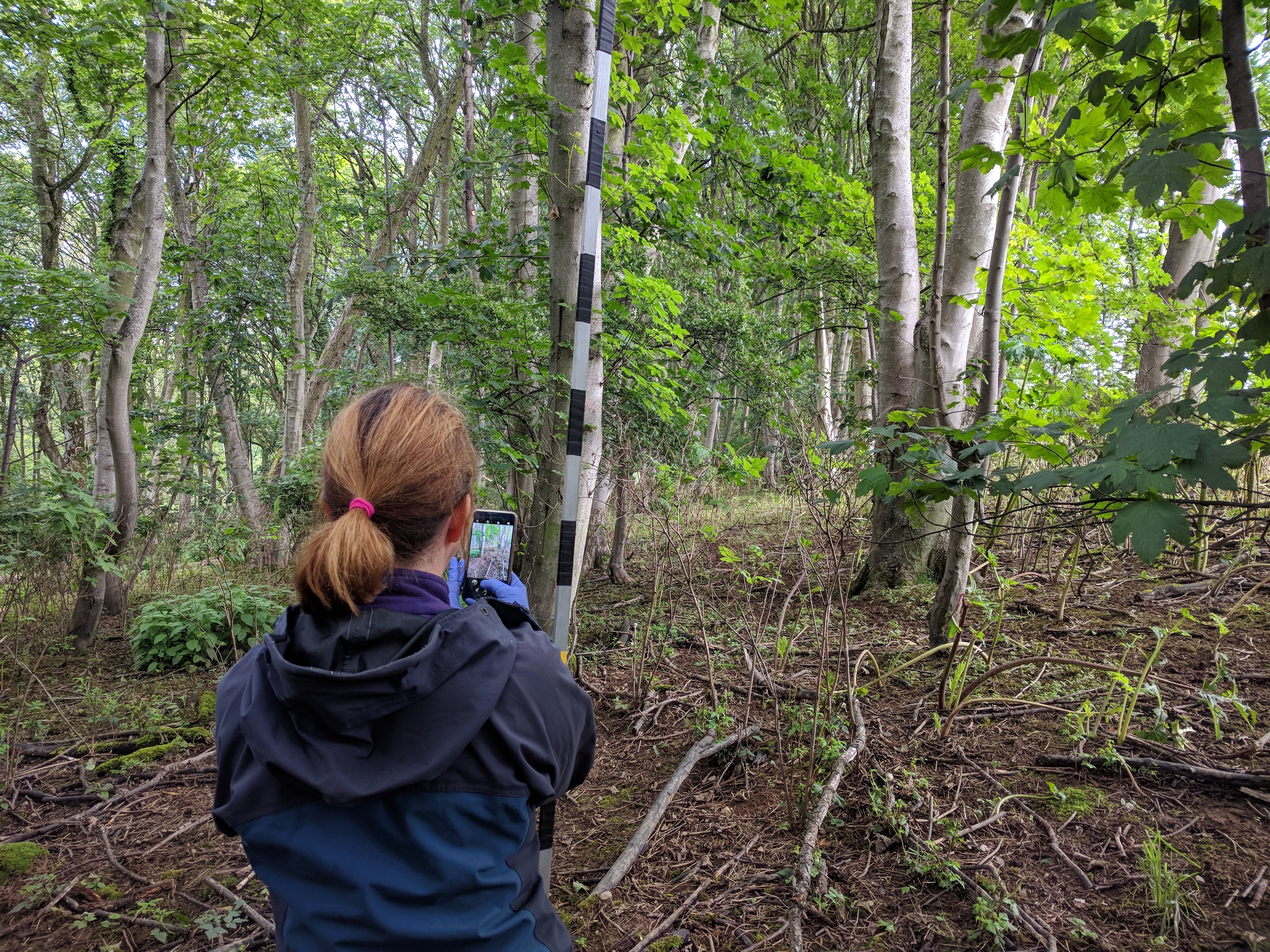 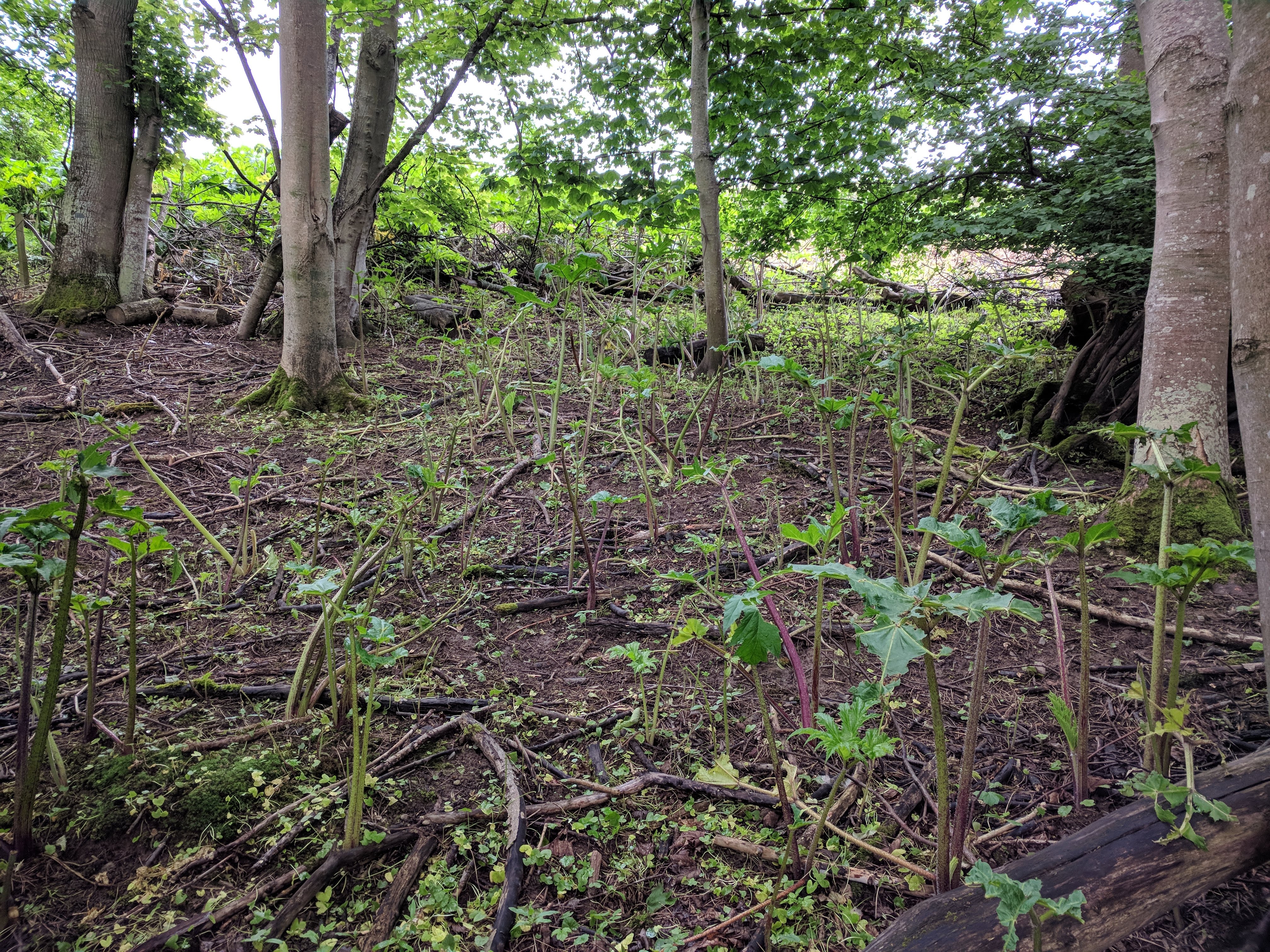 2019
To assess the grazing impact across the 42 hogweed monitoring plots the number of seedlings per plot was counted in June and October (Table 1). In June there was an average of 33 giant hogweed plants per plot (1371 seedlings in total, across 41 out of 42 plots), whereas there was an average of 15 plants per plot in October (501 plants in total, across 34 out of 42 plots) - a 54% reduction in hogweed numbers found across the summer.

There was little change in average vegetation height (7cm in both June and October) but an increase in grass and nettles was observed.  Salmonberry, hedge woundwort, nettles, bracken and ash seedlings all showed signs of grazing and there was an increase in average bare ground % in the plots from 24% to 39% (62% increase) (Table 2).

2020
In 2020, we repeated the monitoring established in 2019. The numbers of seedlings/plants per plot were counted in both the 42 giant hogweed and 28 general vegetation plots in June and September (Table 1).

The average vegetation height was higher in 2020 (22cm in June and 14cm in September) than 2019 (7cm in June and October) (Table 2).  This can be explained by the observed increase in grazing tolerant species - such as nettles - colonising areas of bare ground created due to overgrazing in 2019. Salmonberry, nettles and bracken all showed signs of grazing, but to a lesser extent than in 2019.  While an increase in grazing tolerant species was observed in many plots and a reduction in herb cover in most plots in 2020, some areas of the site showed encouraging signs of re-vegetation.

The average vegetation height on site was higher in 2021 (38cm in June and 28cm in September) than 2020 (22cm in June and 14cm in September) and 2019 (7cm in June and October) (Table 2). This is the result of the observed increase in grazing tolerant and well defended species (nettles and to a lesser extend thistles and bracken) having colonised bare ground created due to historical overgrazing in 2019, as well as in 2020 (to a lesser degree). Some areas showed encouraging signs of revegetation and transition from giant hogweed to bare ground to mixed grass and herbs. Lower levels of grazing and new growth was observed for salmonberry bushes and areas with ash seedlings.

Based on the three years of the trial, a reduction in giant hogweed occurrence was observed over the spring to summer grazing period across the study years.  We have recorded a reduction in both the number of plots with hogweed present and number of hogweed plants in the plots.  We noted that giant hogweed seedlings were still emerging in areas outside the trial site in October further suggesting that these decreases are not just a function of seasonal growth reductions. Therefore, initial observations would suggest that the decrease in hogweed occurrence is a result of sheep grazing.

A decrease in hogweed presence was also observed between 2019, 2020 and 2021, in both the hogweed and vegetation plots and based on three years of data it would appear to be a result of the annual sheep grazing.

Based on these findings, the reduction of grazing presence on the site in 2021 by 74% compared to 2019 (or 46% reduction compared to 2020) did not appear to reduce the control of giant hogweed delivered by grazing.

A reduction in the extent of bare ground (an indication of overgrazing) was recorded between 2019 and 2021. Some promising revegetation of previously bare areas with grasses and herb cover was noted in 2020 and continued in 2021 with even lower levels of overgrazing and encouraging new growth of some shrubs and tree seedlings. It is hoped such revegetation can help to reduce hogweed re-growth from the soil seedbank.

In 2019, at the start of the trial (for about a month) the sheep took time to acclimatise to their new surroundings before they started grazing giant hogweed - this resulted in some of the hogweed plants growing larger than was preferable and reduced grazing effort over the initial potential grazing period.  However, after being removed from the site over winter the sheep restarted hogweed grazing straight away when reintroduced to the site in 2020 and 2021.  This suggests that, once a “taste” for and familiarisation of giant hogweed grazing has been established it is retained across grazing years and seasons.

Despite the successful grazing by the sheep throughout 2019, there were some patches of hogweed that had grown too big and dense for the sheep to graze – due to the delay in them starting to browse the hogweed plants after introduction.  In 2020, the sheep again tackled hogweed successfully throughout the site, but some flowering plants were cut in areas that were not easily accessible for the sheep and to prevent seed dispersal in the site. This repeated in 2021, but with less flowers required to be cut as ongoing grazing effort often prevents giant hogweed plants reaching flowering maturity in the majority of cases.  We think that this approach is likely to be required in future years and shows that annual checks will be needed at the site to identify flowering plants to be cut to prevent adding to the seedbank.

Our initial findings are that sheep grazing is proving to be effective in controlling giant hogweed at the site.  Once the sheep were on site, they did an excellent job of controlling hogweed - and were even observed attacking plants that were 1.5m tall!  We continue to monitor both the hogweed and other plants present on the site to help adjust grazing pressure to avoid overgrazing.  Importantly, the control delivered by grazing required minimal time commitment from the land manager to manage - this is promising as we hope this work may encourage other land managers to adopt this approach in other locations in the future.

Sheep will be returned to the site in 2022 to continue their work.  To address the issue of over grazing whilst maintaining effective hogweed control we intend to introduce the same number of sheep (12) in 2022 as in 2021 for a similar length of time.  We are preparing management advice, to be published in 2022, for use elsewhere.

Downloads
(These pdf documents are not fully accessible)

A previous sheep grazing trial, by the University of Aberdeen and the Deveron, Bogie and Isla Rivers Charitable Trust at Auldtown (near Huntly) ran from 2013-2016 and showed that in a controlled environment, sheep successfully grazed and controlled giant hogweed in an infested field.

Sheep grazing continued on the site following the original study period and was still active at the time the Scottish Invasive Species Initiative project started.

The site was re-visited and monitored in 2019 and 2020 to continue to assess the long-term outcomes of giant hogweed grazing, which will inform the current Macduff trial and the grazing advice that we intend to prepare from these trials.

Downloads
(These pdf documents are not fully accessible)