Case Study: Assessing the most successful control method for the removal of White Butterbur 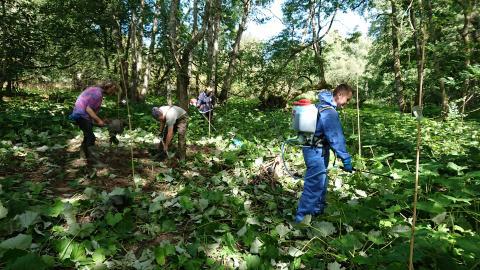 White butterbur is an invasive non-native species that is particularly prevalent across the North East of Scotland and causes serious environmental impacts along riparian corridors.  To determine the best method of plant removal, two trial sites have been created on the River Fiddich to assess a variety of treatment methods with the aim of being able to make recommendations for more specific control strategies for White butterbur.  This case study introduces these trials and will be updated as our work is progressed.

Background
White butterbur (Petasites albus) is a rhizomatous plant favouring deciduous, riparian woodland. It does not set seed in the UK - instead it spreads by expanding its rhizome and through vegetative means. The plant is early to leaf, forming a dense overlapping canopy of leaves through which light cannot penetrate. In areas where White butterbur is well established, biodiversity is dramatically reduced, with native flora excluded resulting in a negative impact on riparian woodlands. Bank stability is also reduced as the rhizome is not as consolidated as the root structures of native riparian species.  This can lead to increased bank erosion and subsequent sedimentation of the aquatic habitat, which in turn can have a negative effect on the quality of salmonid spawning gravel downstream.

The main distribution of White butterbur within the UK is concentrated in the North East of Scotland. It has, over time, become the dominant species along the riparian corridor of the river Fiddich in particular and in addition forms large, dense stands on other rivers across the region. The Scottish Invasive Species Initiative provides an ideal opportunity to undertake management-based research to try and identify effective control methods for this species.

Control can be achieved through application of systemic herbicides, such as glyphosate.  However, the extent of the White butterbur is such, that huge quantities of herbicide would need to be applied across large areas in order to control the species. This scale of herbicide application is expensive and could have damaging effects on the soil quality and the wider environment.  Therefore, there is a need to research alternative control methods to reduce reliance on herbicide application.  We will also consider the need for ground restoration of sites post-treatment - as large areas of bare ground will result from extensive removal works which themselves leave soils exposed and vulnerable to erosion.

Action taken
The Scottish Invasive Species Initiative Project Officer, based with the Spey Fishery Board, sought advice from Rene Van der Wal, a Professor of Ecology at the University of Aberdeen to design a trial study to assess the most effective removal and restoration methods.

Two trial sites were selected on the River Fiddich, within the River Spey catchment.  Each trial site was sub-divided into 28 4x4m plots with a buffer zone between each plot. Six different methods of control and removal were identified, and each method replicated four times at each site.  Four control plots were also identified at each site.

The initial removal methods proposed were;

Control plots were left untreated for comparison and to account for environmental influences.

With volunteer help each site was divided into 28 plots using bamboo canes and number tags. Plot numbers were assigned randomly in advance. Over the course of two days in mid-August, the team set up the plots and treated the plants in accordance with the predetermined plot plan.

Due to the time and effort required to hand dig plots the methodology was adapted in the field and the number of replicate plots for digging was reduced to two per treatment method, per site (rather than four). So, in total 24 plots were established at each site (including control plots).

At each site, half of the plots (half of each different removal method) were reseeded in late Autumn using a native wildflower mix to ascertain whether the establishment of native flora would benefit through artificial introduction (reseeding) and if this would assist in suppressing recolonisation by the White butterbur.

At this stage we are able to make only initial comment on the time taken to deliver the removal and control methods.  Not surprisingly, those which involved digging and physical removal took longer and, so, would be more time consuming to deliver on a larger scale than chemical or mechanical treatments.  These initial findings will be considered further as we assess the effectiveness of the treatment methods and of the restorative planting and reseeding within each treatment.

Next Steps
The plots will be assessed in 2019 to ascertain the effectiveness of the different treatment methods.

Further potential control methods have also been identified (including browsing by pigs and dense tree planting). These will be investigated to determine whether they might be introduced to the trial in addition to the current controls and within the duration of the overall project.