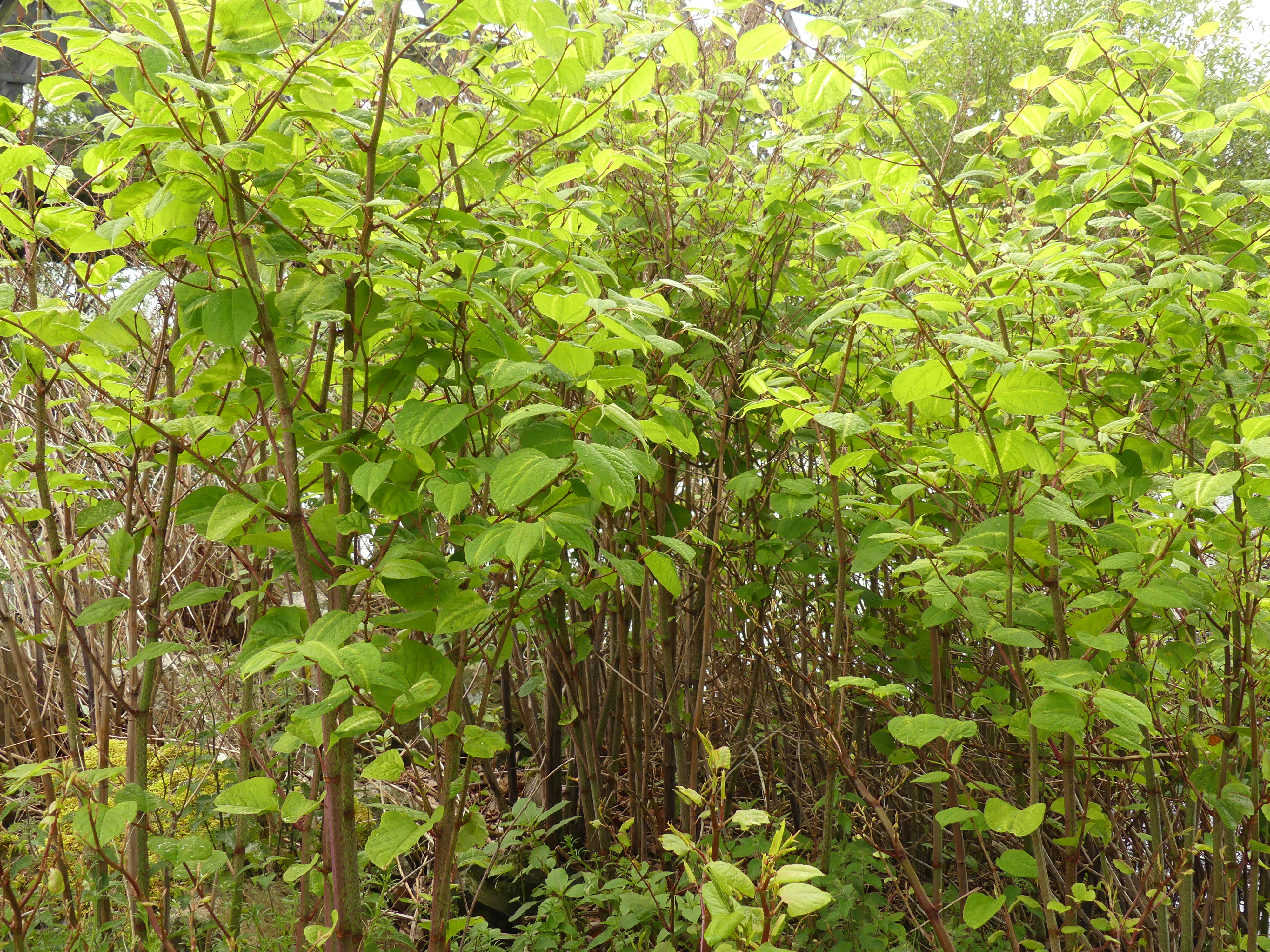 Japanese knotweed (Fallopia japonica) has a bamboo like stem, with purple speckles and roughly triangular green leaves between 10-15cm long, on a zig-zag twig.  It has an extensive root system of rhizomes, making it difficult to remove. Roots can grow up to 3m deep, and travel up to 7m laterally in all directions.

It was introduced from the far East to Europe in 1849, first being recorded in the wild in GB in South Wales in 1886.  Japanese knotweed was considered an ornamental "architectural" plant and widely grown in larger gardens and parks. It was also thought to have been planted by local governments and businesses to shore up embankments and pathways, as it was believed to protect the ground from mudslides and movement.

It tends to grow on disturbed ground, on riverbanks, railways, road sides, waste land and in urban areas. Occasionally it may be found in woodland. 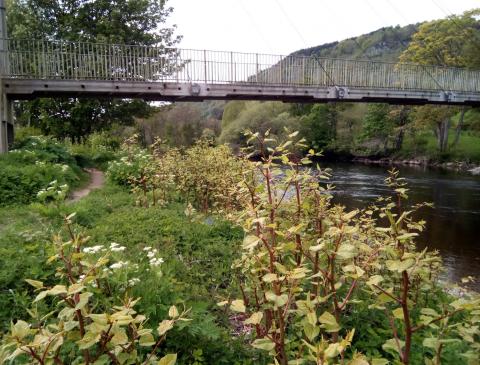 Japanese knotweed forms dense stands which stops native flowers and shrubs from growing. However, the actual impact of this is poorly researched as it usually grows on sites that are already degraded and bare of other plants.

It does alter the habitat structure and wildlife of a river bank, which is known to directly impact on salmonid fisheries, both due to restricting access for angling and hindering conservation efforts of rivers.

The rhizomes of the plant are extremely tough and re-grow readily. It has caused problems by growing through foundations of houses and pavements and this has led to the plant having a high economic impact.  It is a legal requirement to eradicate Japanese knotweed from construction sites, to do so is very costly, in the actual removal and the disposal of what is classed as contaminated waste. 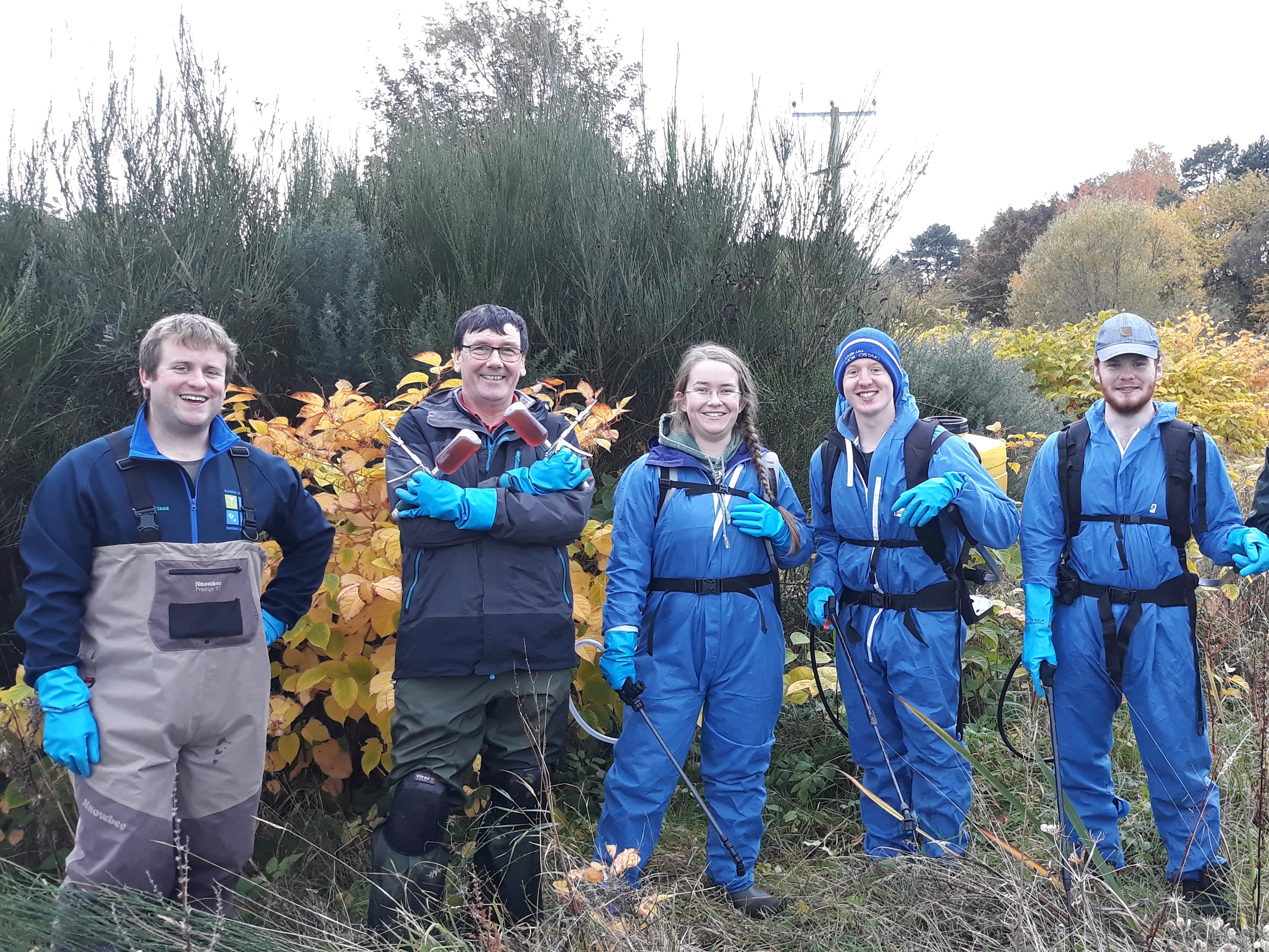 Japanese knotweed is growing in dense strands along many of the rivers in our project area.  The root system of rhizomes in the riverbank is often left exposed as erosion and flooding wear away the soil. Fragments of rhizome can then be washed downstream and subsequently establish elsewhere.  However most plants in GB do not produce seed, so it is not a particularly mobile species and we are mostly dealing with long-established mature stands of knotweed.

Most of our management work centres around stem injection - on average, we inject nearly 50,000 individual stems per year!!!

This has only been possible thanks to the support and work of numerous volunteers who have come along and helped. With stem injection it is definitely a case of many hands make light work!

Find out more about volunteering and getting qualified to stem inject

Our Site Case Studies provide details of the control works undertaken at a particular site over a period of around three years and the results seen during that time.

You can read about the effectiveness (or not!) of the treatment regime on the abundance of invasive plants at the site and our future recommendations for continued control. 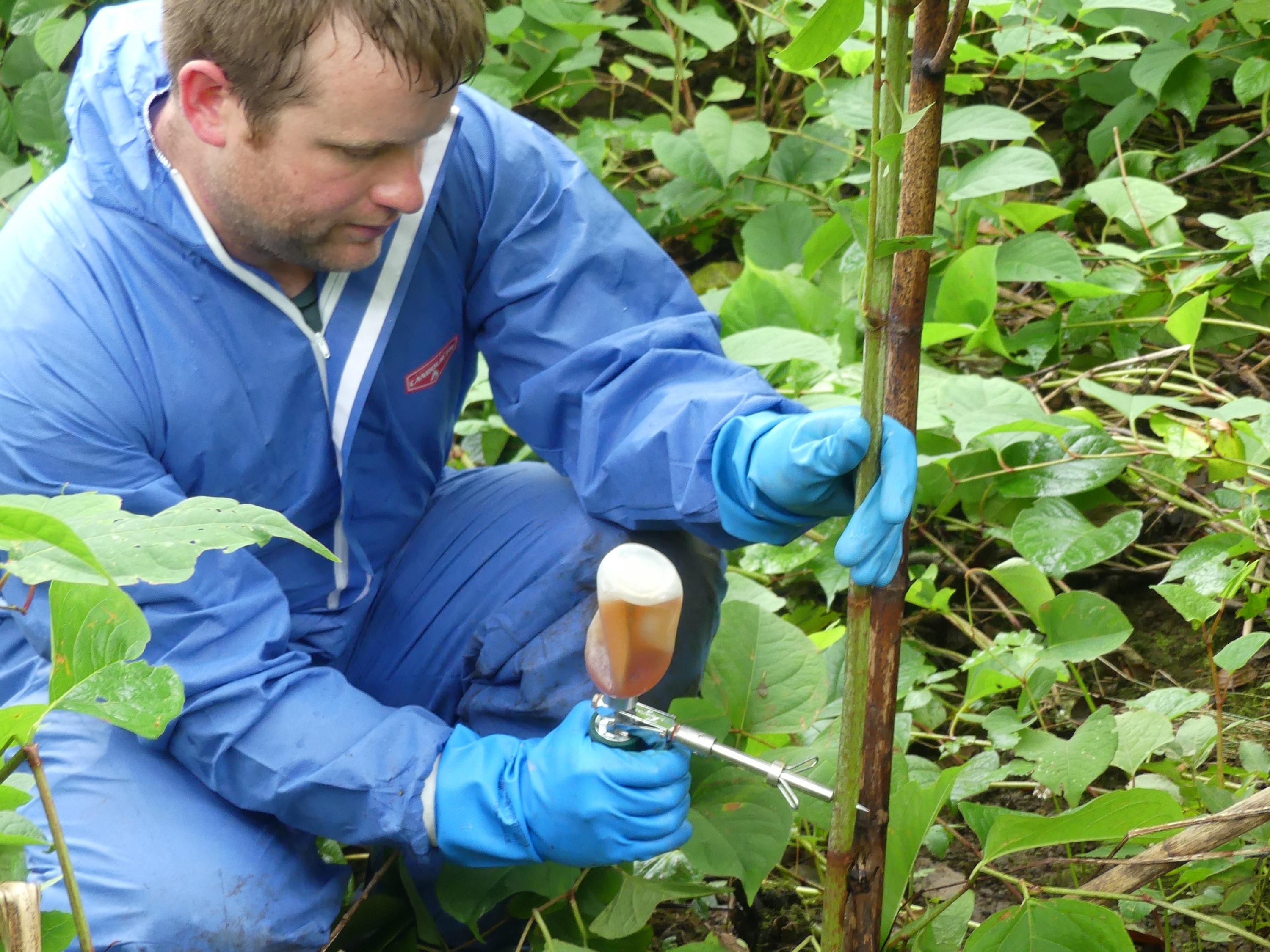 Due to its persistent rhizomes and ability to regenerate, research suggests the only effective way of controlling knotweed is by herbicide (Glyphosate) application.  Treatment is needed over subsequent years, while initial success can be achieved in the first year, at least some of the root will remain and will grow to form a new stem if the treatment isn't followed up in years 2-3. The average time for a chemical treatment programme is 3-5 years.

We most commonly use stem injectors (similar to a water pistol!) to apply herbicide.  These deliver a measured does of Glyphosate directly into the stem of the plant so is very targeted and effective, but it is quite slow work and rather labour intensive.

On on large infestations we use the more practical method of spraying herbicide from backpack sprayers. While less effective it is more efficient when treating large areas.

We treat plants from the late summer to autumn, usually between August and October. 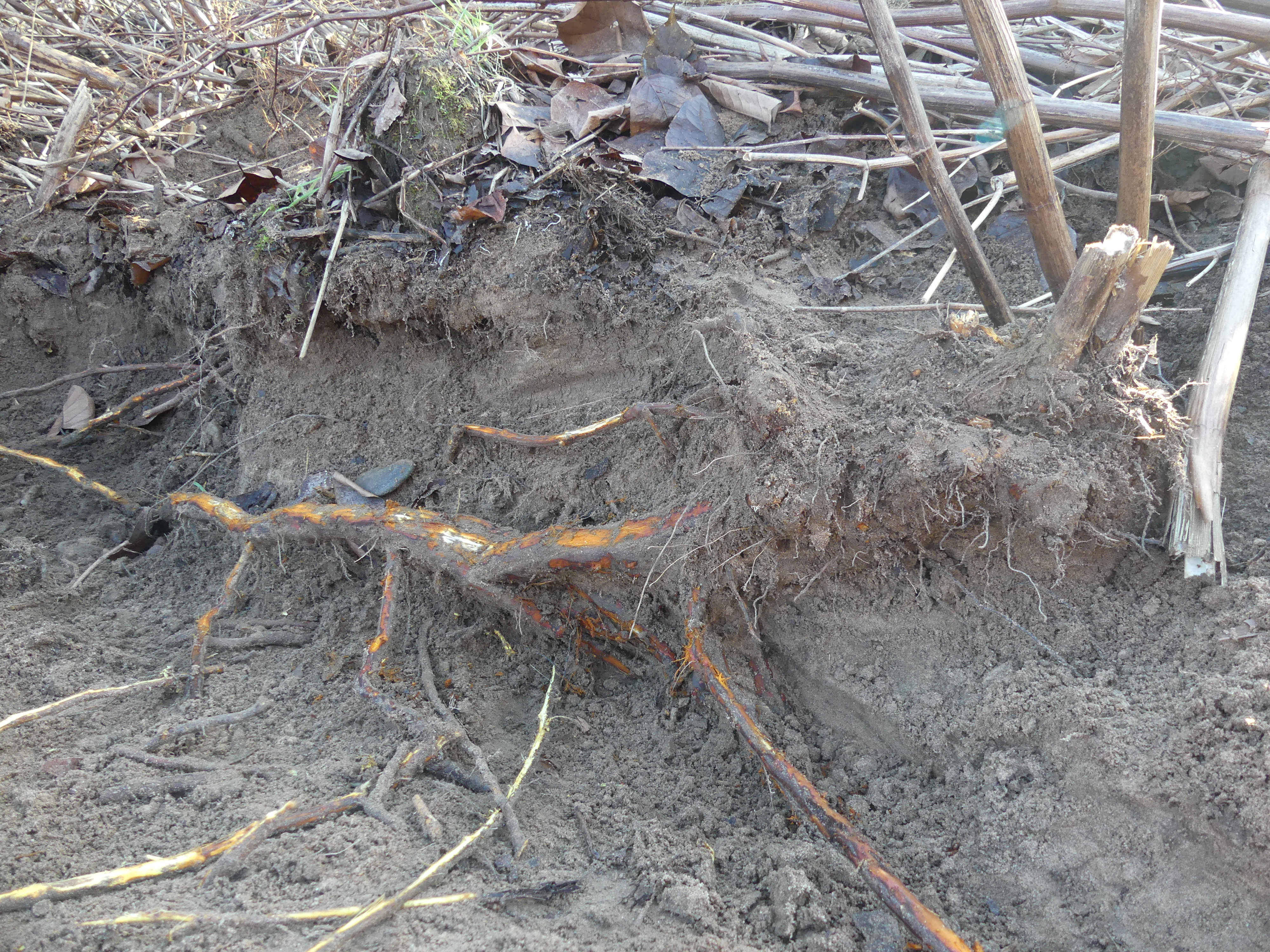 DO NOT cut, mow or strim growing Japanese knotweed. This will not kill it, the plant will re-grow from the root and there is a high risk of making the problem worse - a small fragment of root or stem with a node can grow into a new plant.

Digging requires the removal of all the rhizome and all the surrounding soil which is classed as contaminated. This is then classed as controlled waste and a licence is required for disposal. As such digging is only carried out at a commercial scale. 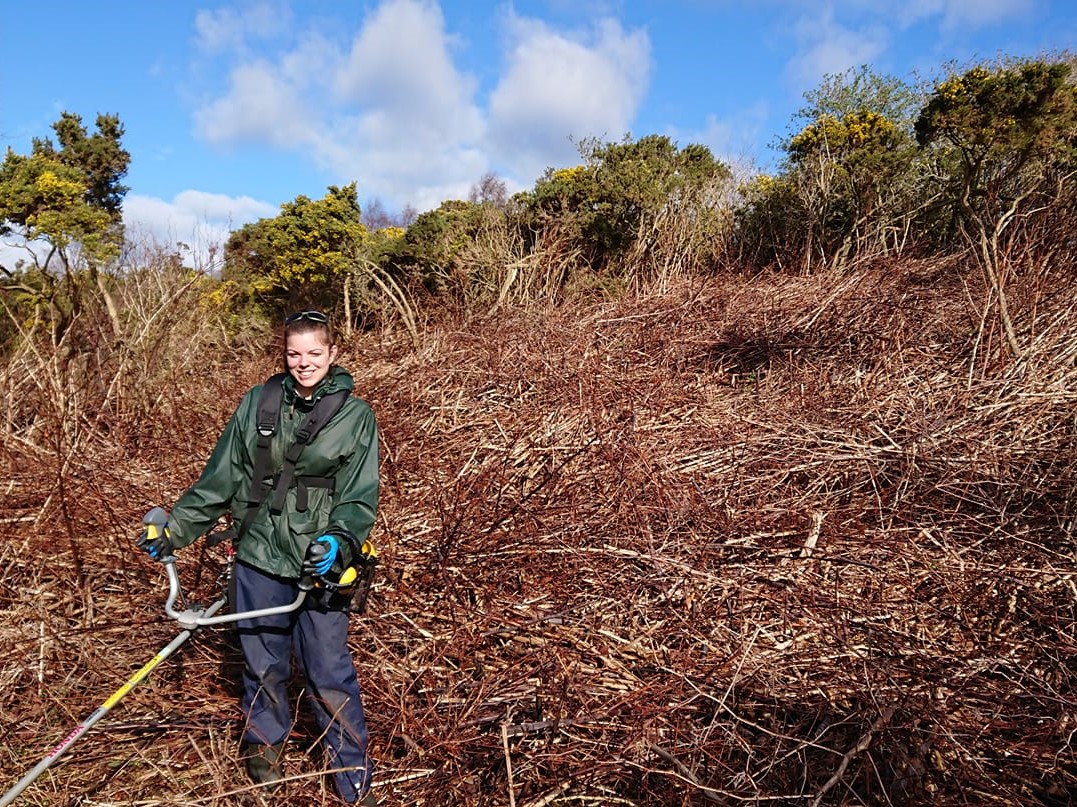 We have found it useful on some sites to visit in the winter and strim back the dead canes of knotweed.  This allows us easier access the next season to get in to carry out stem injection.

N.B. This is only carried out on dead, previously treated canes - never strim growing knotweed!

Find out more about the hazardous Giant hogweed, why it is invasive and how to control it.

Find out about the dominating Himalayan balsam, pretty flowers, but a pretty serious problem for our riverbanks.