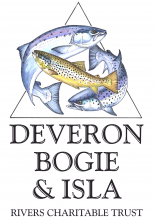 Since being established in 2001 the Deveron, Bogie and Isla (DBI) Rivers Charitable Trust has been working to conserve, protect and rehabilitate salmon, sea-trout, trout and other indigenous wildlife and to promote the ecological cycle within the Deveron catchment area. Equally important has been the work to raise people’s awareness of conservation and protected areas by commissioning research and publishing the results for the public’s benefit.

As part of SISI our project officers will be working on Giant Hogweed, Japanese Knotweed, Himalayan Balsam and American Mink – covering the Deveron, Bogie, Isla, as well as the Ythan, Ugie, Water of Cruden, and their tributaries.

In the Deveron, Bogie and Isla area, Giant Hogweed and Japanese Knotweed are priority plant species, with treatment along the Deveron spanning from Cairnborrow to Banff, from Rhynie to Huntly where the Bogie joins the Deveron and on the Isla from Towie, upstream of Keith, to Rothiemay where it also flows into the Deveron. Following a successful trial of using sheep to control hogweed in conjunction with Aberdeen University, we will continue working on this and plan on rolling this out to other suitable locations in the future, as part of the SISI project.

In the Ythan catchment, Giant Hogweed poses the most serious problem, while Japanese Kotweed and Himalayan Balsam are present in a smaller number of locations on the river and tributaries. We will be treating hogweed predominantly on the Tipperty burn near Newburgh and on the Ythan in the area between Rothienorman, Auchterless and Woodhead. After surveying the whole of the river Ugie, we have been presented with the rare opportunity to take a stand against invasives before they have a chance to dominate the river banks. Giant Hogweed and Japanese Knotweed were found to be the most widely spread species, which makes them a priority, especially between Maud and Mintlaw. On the Water of Cruden Himalayan Balsam and smaller stands of Japanese Knotweed are our focus in Cruden Bay, Hatton and beyond.

Mink are also a priority in our area, in order to keep up the accomplishments the Scottish Mink Initiative achieved before us. Our volunteers and their adopted mink rafts are already covering parts of our rivers and tributaries and, going in to the future, we are particularly keen to establish a mink raft network in our coastal areas, between Buckie and Fraserburgh, where mink sightings are still fairly common.

We realise that we are only a small part of successful invasive species control, so across our north-east project area, we are already working with fishing beat and land owners, farmers, ghillies, a number of Universities and Colleges, and a range of organisations such as Aberdeenshire Voluntary Action, Chivas Brothers, Angling Associations and the Ythan Biodiversity Volunteers - just to name a few! Forging new relationships with the Community Payback Team, Council and Kayaking Club are in the works!

Our work with invasive species in the DBI area began in 2003 when we started carrying out surveys for Giant Hogweed, which identified the Isla and Bogie rivers as the main seed sources. Staff started carrying out coordinated control on the Isla soon thereafter, followed by work on the Bogie with the help of Huntly Fishings. On the Deveron main stem, farmers, river champions and fishing beat and land owners helped to implement a top down approach for hogweed control. Japanese Knotweed surveys and treatment became a part of our invasive control soon after the hogweed was tackled and for the last 4 years we have also been pulling Himalayan Balsam. Our invasive species control was quite sporadic, until in 2009 LEADER and SNH funding enabled us to employ a full time biosecurity officer - at which point we also started working as part of a mink control network.

Invasive control on the river Ythan has also been on-going for a number of years. The first survey for invasive species was carried out by the River Ythan Trust (RYT) in 2012 and the Ythan Project Volunteers (YPV) started invasive non-native plant control in 2014 in conjunction with the RYT. End of 2014 the Ythan Biodiversity Volunteers were formed which tackled invasive species until 2016, at which point funding was secured for a contractor to treat the Giant Hogweed in 2017 and 2018. Volunteers, such as the Ythan Biodiversity Volunteers, the Formatine Partnership/Community Planning Group, the River Ythan Trust and District Salmon Fishery Board, just to name a few, have always played a critical role in this catchment - without them none of the treatment activities would have been possible.