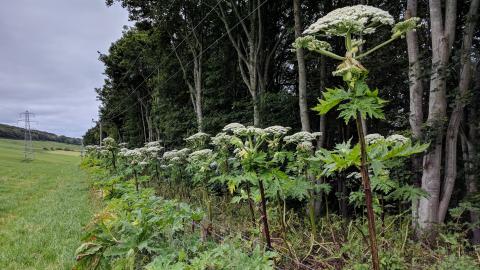 This case study from the Rosy Burn – a small, low amenity tributary of the River Deveron in Aberdeenshire - looks at how low motivation amongst neighbouring landowners to tackle a shared Giant hogweed problem was overcome.

Commonly, and understandably, land managers do not have the time, knowledge, inclination or legal incentive to initiate control of plants such as Giant hogweed either on their own or in collaboration with others. In this example the Scottish Invasive Species Initiative brought land managers together and facilitated the pooling of resources to jointly employ a contractor to undertake control work of benefit to all.

Giant hogweed control was undertaken and a partnership formed which, we hope, will continue to collaboratively deal with the shared Giant hogweed problem in future years.  The role of the Scottish Invasive Species Initiative as an “honest broker” helped to bring the landowner group together and develop common understanding and common purpose to the group.

The Rosy Burn is a tributary of the River Deveron near Banff in North East Aberdeenshire. The lower 5km of the burn flows through a shallow gulley with farmland on both sides and is managed by seven different land managers (Figure 1). The burn is largely hidden from view and consequently infrequently used by farmers or accessed by members of the public.  Whilst in the past there has been some sporadic control of isolated patches of Giant hogweed by an individual land manager and the local rivers trust the lack of co-ordinated and sustained control has resulted in hogweed spreading and taking hold along the lower stretch of the burn.  In one area land was taken out of agricultural grazing and planted with trees - the removal of the grazing pressure and ground disturbance from the tree planting resulted in a further serious hogweed infestation becoming established (Figure 2).

During treatment of the site in 2018 by staff and volunteers of the Scottish Invasive Species Initiative the scale of hogweed infestation and problem was realised (Figure 3).  Initially control treatment at the site – a relatively short length of infestation of around 5km - was expected to take at most a single day to complete.  However, as additional large and dense patches were discovered it was realised the scale of the problem was much larger and that a more sustainable approach to control was needed - and which should involve the relevant landowners and land managers.

In talking with landowners it became clear that the control of hogweed on the Rosy Burn was a low priority for them individually – despite each recognising the problem and public risk of allowing the plant to remain and further establish.  The approach taken by the Scottish Invasive Species Initiative in response to this was to approach each of the landowners with a proposal to work collaboratively and jointly fund a contractor to undertake control work on behalf of the group.

During autumn 2018, the local Project Officer visited each land manager in person to explain the scale of the infestation, the impacts of and problems caused by Giant hogweed and how it was important to get in control of the problem before it became too difficult and costly to handle.  The suggestion of the land manager making a financial contribution towards a jointly funded contractor to undertake work the next growing season (spring 2019) was presented as a solution to the issue.

One key part of the proposition was that the Scottish Invasive Species Initiative would source and manage the contractor on behalf of the landowner partners.  This meant that the landowner did not require to take time to deal with these administrative and management tasks – but could be reassured that these issues were being taken care of professionally. The only landowner contribution required was a financial one.
When all partners were agreed on this approach, a contractor cost was secured and this, divided equally among the land managers, was shared for approval.

All land managers were happy to agree to the cost - on the proviso that everyone else had also agreed.  Whilst the agreement was managed relatively informally, and there was no formal contract prepared confirming the arrangements across the partnership, clear paperwork was prepared and issued confirming a schedule of costs and work to be undertaken by the contractor.  This was sufficient to reassure the partners of the costs in total, the work to be undertaken and their respective share in this.

In the early summer of 2019, the contractors (retained by the Deveron, Bogie and Isla Rivers Charitable Trust) treated Giant hogweed along a 5km stretch of the Rosy Burn using glyphosate applied by knapsack sprayer.  This initial work was followed up with an additional treatment a month later. Scottish Invasive Species Initiative project staff also visited the burn to undertake a final mop-up treatment and to ensure that no flowering plants remained in 2019.

During the autumn, the local Project Officer re-visited each land manager to deliver a treatment report and invoice for work completed.  These personal connections and meetings allowed productive discussion to take place about repeating the partnership in 2020 and building on the relationships formed.

Key to the success of this collaborative, multi-landowner approach on the Rosy Burn was the assistance offered by the Scottish Invasive Species Initiative staff to, firstly, initiate individual landowner discussions so that a common purpose and understanding was developed.  From those discussions a relationship of trust was built which provided confidence to each landowner that the problem was manageable, understanding that it was a shared problem requiring joint action and that, with the coordinating input of the Scottish Invasive Species Initiative, the hogweed could be tackled successfully using a shared contractor.

The removal of landowner responsibility for contractor appointment and management was an essential requirement of the approach taken.  Whilst landowners were content to support the work financially, they did not wish to commit their valuable time to taking care of a relatively low priority problem for them and to a subject they perhaps had little technical knowledge of. We do not believe that hogweed control work on the Rosy Burn would have been initiated and undertaken without this “honest broker” role being taken up by the project.

Bringing all the land managers on board was essential to the success of this approach - if one had not agreed to participate then others would not have to committed or dropped out and the scheme would have failed.  The understanding of the mutual benefit of, and shared commitment to, tackling the hogweed problem was achieved through the initial and ongoing face to face engagement with local project staff and their commitment to developing trust and building positive relationships with all parties.  The provision of progress updates and a final treatment report visit to each partner were time consuming but essential elements of maintaining an effective collaboration.  This time investment is important to build into the planning of future schemes similar to this.

The Rosy Burn partnership has delivered a successful outcome. The Giant hogweed along the 5km lower stretch of the Rosy Burn was treated, all land managers engaged with the work and recognised its importance, a positive collaboration with the Scottish Invasive Species Initiative was formed and a plan put in place to continue the treatment regime in 2020.

Each landowner has agreed to continue the partnership in 2020 and make a financial contribution to, once again, pay a contractor to undertake treatment. This will again be organised and co-ordinated by the local Scottish Invasive Species Initiative staff.

In the longer term, we hope that ongoing treatment may become self-sustaining along the burn without the ongoing support of the project.  However, this may rely upon either the contractor taking the initiative to approach each landowner each year or for one of the landowners themselves to take a lead role.  Our challenge in the remaining period of the project is to continue to build on the work of 2019 and, by recognising and sharing the success of this approach to control, encouraging its continuation in the future.

The partnership continued successfully in both 2020 and 2021, with each land manager continuing to make a financial contribution to collectively pay a contractor to undertake treatment works. This was again co-ordinated by the Scottish Invasive Species Initiative staff.  It is expected that works will again be undertaken in 2022.