Case Study: Engaging and mobilising a community to manage invasive plant species on the River Bervie 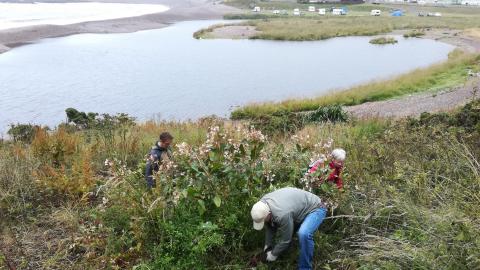 Summary
The need to control Himalayan balsam and Japanese knotweed along the River Bervie in Aberdeenshire required the engagement and mobilisation of a community volunteering effort and partnership to be effective. The Scottish Invasive Species Initiative met with several community groups from Inverbervie and, through a well promoted public conservation day, succeeded in generating significant community action providing a sustainable mechanism for continued local invasive species removal.

The ‘Brighter Bervie’ group were successful in the Keep Scotland Beautiful ‘Beautiful Scotland’ awards and specifically recognised for their work tackling invasive plant species.  The community group benefitted from skills training provided by the Scottish Invasive Species Initiative and remain inspired to continue their control work in the future. This partnership model of joint working and community training and capacity building is transferable to any community location – the initial investments and inputs made by the Scottish invasive Species are far out-weighed by the immediate results achieved and sustained commitment of the Inverbervie community to maintain their control efforts.

The River Bervie is 30km long, starting in the foothills of the Cairngorms and reaching the sea on the north side of the town of Inverbervie. The Bervie currently has two invasive non-native plants growing along it; Japanese knotweed and Himalayan balsam. Japanese knotweed is present along a considerable stretch of the river in scattered to dense stands whilst Himalayan balsam is less prevalent with small patches at the top of the catchment and in a tributary at the bottom of the catchment by Inverbervie.

Rather than routinely using contractors to remove invasive plants the Scottish Invasive Species Initiative aim to create a self-sustaining community-based control model in Inverbervie where the community is enthused, empowered and equipped with the skills, knowledge, confidence and support to continue invasive species control work in the future.

The Scottish Invasive Species Initiative (SISI) project officer, attached to the Esk Rivers Fishery Trust, started working in the area in Spring 2018, and identified the need and opportunity to encourage coordinated control of both invasive plant species around the Inverbervie area.

First of all contact was made with key local stakeholders (volunteer group Brighter Bervie, Inverbervie and Laurencekirk Angling Associations, and local estates) to establish the current extent of invasive non-native species control work being undertaken and how the Scottish Invasive Species Initiative could support and help co-ordinate and enhance this.

In the case of Japanese knotweed, the District Angling Associations (DAA) were eager and enthusiastic to undertake control work - but barriers to this were quickly identified.  The Inverbervie DAA had a lack of people qualified in pesticide application, whereas Laurencekirk DAA had suitably qualified people, and had been undertaking control over the previous five years but did not have the budget to purchase pesticide to continue control. The local estate also confirmed an interest in coordinated control taking place.

Although the community groups were aware of the presence of Himalayan balsam, limited control had taken place on the River Bervie, due to a lack of motivation and coordination.  The Scottish Invasive Species Initiative discussed this with the Brighter Bervie group and the Inverbervie DAA who were both supportive of a collaborative community volunteering event to overcome this.

The SISI Project Officer led the organisation of the event which ran on July 29th which was advertised locally, in the press and on social media. In addition, local volunteering and environmental groups were approached to gain their support including Johnshaven’s local environmental group and Aberdeenshire Community Payback team. The location for the session was a gully/burn running down a steep hillside overlooking Inverbervie bay, where Himalayan balsam had overrun the area.

The Brighter Bervie group were also keen to ensure that the volunteering effort generated to remove the Himalayan balsam would count towards their efforts to gain a Beautiful Scotland award for their town.

Results
The community volunteering day was a great success in both raising awareness of the Himalayan balsam problem across the community and in removing all the balsam from the small target catchment. Despite the difficult location and poor weather conditions on the day 15 volunteers attended the half-day event. Without the early engagement between the Scottish Invasive Species Initiative and the community groups involved the event would not have been possible or been so supported or led to realistic future plans.

The event gained good publicity - enhanced due to it being part of the ‘Brighter Bervie’ Beautiful Scotland bid.  The Beautiful Scotland judges, accompanied by the local MP, MSP and Councillors took particular interest in hearing about the community invasive removal day during their judging visit.  The SISI Project Officer attended this visit and was able to brief them fully on the community engagement associated with the invasive species removal work.

At the Beautiful Scotland Awards in August, ‘Brighter Bervie’ (and by extension the other local groups involved), in addition to receiving a Silver Beautiful Scotland award, were awarded the discretionary ‘RHS Scotland Award for Overcoming Adversity’ for their work in controlling invasive species. This public recognition was an extremely rewarding and motivating acknowledgment of the hard work of all the partners and community members.

Control of Japanese knotweed also has now taken place on the River Bervie catchment. This was facilitated by the Scottish Invasive Species Initiative providing herbicide to the Laurencekirk DAA to enable them to undertake works this year.  The project has also supported a member of the Inverbervie DAA to gain their PA1/PA6 pesticide qualification.  With more members also planning to gain these qualifications the Scottish Invasive Species Initiative will have provided the means for the Association to gain the skills and qualifications to undertake plant control work in 2019 and beyond.

Although the initial involvement of the two angling associations with the Scottish Invasive Species Initiative was in relation to plant control work, this relationship has developed further and both groups are now involved in the SISI Mink control project too - three mink rafts are now operating in the area and monitored by anglers.

Next Steps
Himalayan balsam at the site at Inverbervie will be controlled in the coming years to exhaust the seed bank, limit regrowth and prevent any further spread.  Initially this will be organised and led by the Scottish Invasive Species Initiative, but it is anticipated that, progressively, the Brighter Bervie community group will assume responsibility for this ongoing action and become self-supporting in doing this.

Japanese knotweed control will continue to be overseen and coordinated by the SISI Project Officer, who will provide support and training opportunities to the local angling associations and estate to ensure that control work continues.

The aim in both cases is to achieve ongoing and coordinated control at a catchment scale to remove a significant amount of Japanese knotweed and Himalayan balsam over the next few years. This, in combination with raising awareness, enthusing and training of local people, will result in plant populations being reduced in extent to in a state where the community is able to continue with on-going control and until complete removal is achieved.

Recognising that the involvement in the Beautiful Scotland Award scheme proved an added incentive to mobilising community action, the Scottish Invasive Species Initiative has reached out to other local communities working towards the award offering support and assistance in the control invasive species in their local area.  A number of these groups are taking up this offer.

The commendable turnout on the volunteering day was undoubtedly boosted by working with and contacting various local community organisations. As well as Brighter Bervie members, individuals, members of Inverbervie DAA, Shark-Johnshaven (local environmental group) and Aberdeenshire Community Payback groups all supported and participated in the event.

A significant challenge in this case was the weather, the forecast for the community day was so poor that the event was nearly cancelled, and this will have put many people off attending.  It is hoped for better weather and a bigger turnout next year!

The community’s enthusiasm for the work and the commitment to future works was definitely boosted by the positive publicity around the project, both before and after the event. The support of the local MP and MSP’s and the subsequent Beautiful Scotland Award further contributed to this and strengthened the community awareness and commitment to removing invasive species - this will be built on next year with another community event.

There was a significant time commitment by the SISI Project Officer in undertaking the necessary meetings and event planning to initially enthuse and mobilise the community groups.  However, now this has been achieved it is anticipated that less support time will be required each year and ultimately the invasive species management will pass fully to the community of Inverbervie.