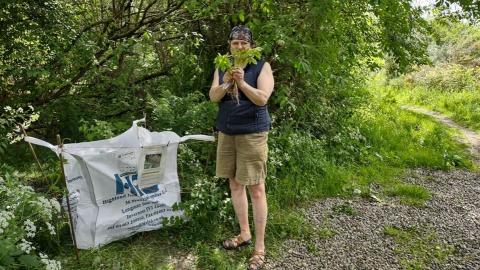 This case study looks at the project set up in Beauly to encourage the public to get involved with impromptu Himalayan balsam pulling while out and about on walks.  Informative signage and a series of large sacks (to collect pulled balsam stems) were used to inspire and support local people to take action.  In its first year the scheme was successful in raising awareness and resulted in people getting involved and pulling Himalayan balsam stems from the control area.

The project is running alongside a programme of co-ordinated Himalayan balsam removal at priority sites in the Beauly catchment which is managed by the Beauly Fishery Board and part of the Scottish Invasive Species Initiative.  The aim is that public engagement like this will have an important role in a year or two when the balsam sites have been initially cleared.  At that stage the public effort of ad hoc pulling will be essential to remove any remaining small amounts growth from the riverbanks and protect the cleared areas.

To tackle the Himalayan balsam problem on the Lower River Beauly catchment the Beauly Fishery Board, a delivery partner in the Scottish Invasive Species Initiative, initiated a project in early 2021 to work with the local land manager, Lovat Estates, and support local volunteers to take action.  They set up a community action group – the Beauly Balsam Bashers - who tackled priority sites and removed balsam (see Beauly Balsam Bashers case study for more information) from priority locations.

To further raise awareness about Himalayan balsam and engage and encourage more local people to get involved the partnership prepared ‘join in’ project signs and set up a number of collecting bags to encourage passers-by and dog walkers to pull a bit of balsam while out on their walk.

The areas identified for the community project were the riverside footpaths in Beauly around the Old Ferry Point and the Green Bridge (see Figure 1.)  This area contained two priority action sites identified for control by the Beauly Fishery Board and, as it runs along the edge of the town, is a popular well-used route. 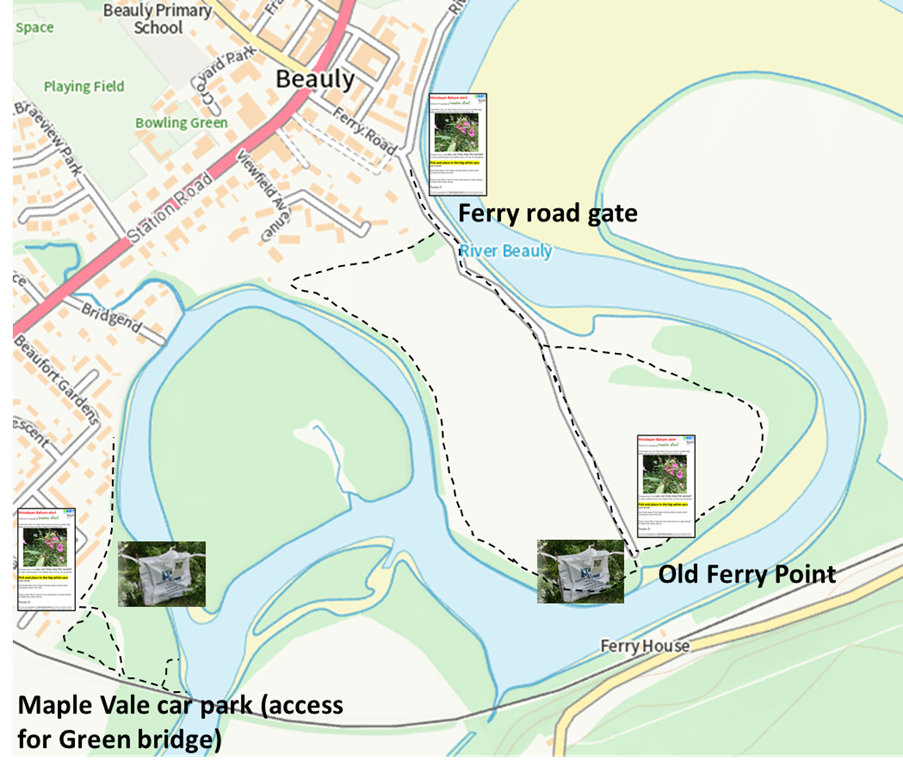 White collection sacks were placed at the Old Ferry Point (Grid Ref. NH 530 457) and the Maple Vale Car Park near the Green Bridge (Grid Ref. NH 523 457), with signage explaining that Himalayan balsam was an invasive non-native plant species and encouraging people to ‘pick and place’ balsam into the sacks (see Figures 1, 2 and 3).

The sacks were put out in mid-June and the Beauly Balsam Bashers waited to see what happened – what happened was that the sacks filled up!  Volunteers from the group monitored the sacks and when full reported through to Lovat Estates who collected and emptied them at a central composting site (see figures 4 and 5).

While the collection and removing Himalayan balsam from site is not necessary (the pulled stems can be composted on site) the use of bags was a critical part of the project and engagement plan.  Making the collection process visible helped to raise awareness and generate further public engagement action.

The collection sacks were initially set up on 18 June - one at each site.

However, it transpired that a few members of the Beauly Balsam Bashers group had put some balsam in the sacks during their pulling sessions, so it is not known how much balsam was pulled by the public.

The Old Ferry Point sack was not emptied during the summer – it was collected half full at the end of September.  Here, all of the contents had been collected by the public indicating an initial encouraging level of public engagement.

The work of the Beauly Balsam Bashers will continue in 2022.  It is planned to set up the sacks in the same locations as 2021 and continue with local information provision to further encourage individual action alongside the sessions run by the group itself.

As the Scottish Invasive Species Initiative ends in October 2022 the Beauly Fishery Board will work with the Beauly Balsam Bashers group to support their work in the final project year and with a view to developing a sustainable control mechanism for Himalayan balsam in the future.

As an awareness raising activity the scheme worked well – the signage and collection bags were very visible and easy to engage with.  Through these actions at least one new volunteer joined the Beauly Balsam Bashers group so that they could get involved with the more organised community effort they coordinate.

The support of the local landowner – Lovat Estates – in providing and emptying the bags was essential.   In addition, collection locations which allowed vehicle access were required - though this did not cause any issues with choosing suitable locations.

Once set up the project required minimal effort to manage and succeeded in actively engaging the public and allowing them to make a difference in their local environment. It also raised awareness of the species and its negative impacts.  Work in 2021 gives encouragement that the community engagement and effort generated can be developed and expanded in 2022.