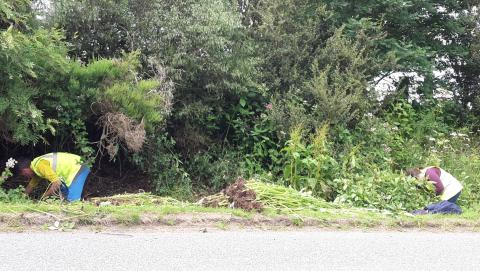 This study examines the community response in the crofting township of Laide in Wester Ross to the challenge of managing and controlling the invasive non-nature species Himalayan balsam which had become established along the Sand Burn.

As the catchment is made up of a myriad of tiny ditches and streams running through private gardens, crofts, common grazing and a community woodland, a cross-community approach was developed over the course of 2020 and 2021 to control the plant from multiple locations.  This was led by Skye and Lochalsh Rivers Trust the delivery partner of the Scottish Invasive Species Initiative in the region.

The Sand Burn is a small river fed by tributaries flowing from a series of lochs to the north of Aultbea in Wester Ross.  These tributaries merge in Laide Wood to form the Sand Burn - which then runs through common grazing parallel to the crofting township of Laide.

As part of the Scottish Invasive Species Initiative invasive plant control programme a small area of Himalayan balsam along the main A832 road and on the lower river was identified for removal.  This appeared to be a small, well contained infestation where control would be relatively straightforward.

Unfortunately, the real nature and scale of the Himalayan balsam problem on the Sand Burn was only uncovered once the volunteer work began – the plant was found to be more widely spread in the catchment than anticipated.  To attempt to eradicate Himalayan balsam from the lower reaches of the burn it was imperative that all upstream seed sources were also identified and controlled.

Himalayan balsam can be removed quickly and safely by the hand pulling of the plant before the seed pods mature after flowering – as the plant has a shallow root system this activity can be undertaken easily by volunteers with no prior experience needed.

The first volunteer action days were organised in July 2020.  At this time restrictions related to the coronavirus pandemic limited volunteer activities and so numbers attending were reduced to maintain the safety of all.

Initially the focus of the balsam pulling was the initial site along the roadside ditch through the village (Figures 1 and 2).  While this wasn’t the most upstream location in the catchment, working at this highly visible site proved invaluable in raising awareness of the issue amongst the community.  The location of other Himalayan balsam patches were quickly reported – and it was confirmed that the plant had been growing in village gardens for over 15 years.

To eradicate Himalayan balsam from the Sand Burn control would have to deal with the upstream sources and secure access to a number of gardens and crofts.  One of the main additional areas of growth was found within the local community woodland on the edge of Laide, which was quickly tackled with the help of the existing woodland volunteer group.

In the following weeks the volunteers tackled Himalayan balsam where they were able to gain access permission.  By the end of the 2020 control season many areas of Himalayan balsam had been removed by community action and a wider understanding of the overall distribution for future work gained.  This allowed more effective planning of control for 2021 to be made.

Before the 2021 control season started a newsletter about the Himalayan balsam work was distributed via social media and the local village shop to generate community awareness and new volunteers.  Crucially permission to access, and remove balsam from, all the gardens and crofts was secured so that the whole Sand burn catchment could be tackled.

A second year of community based control was delivered in 2021. This now included 12 different homeowners taking responsibility to clear the plant from their own properties, as well as the volunteer sessions working on the public land and crofts (Figures 3 and 4).

By the end of the 2021 season only a few plants were present in a few areas - mostly persisting in particularly dense bramble stands.  The reach of the community had also extended and a small patch of Himalayan balsam two miles outside the village which was also removed.

The volunteering sessions organised by Skye and Lochalsh Rivers Trust were very successful in engaging people with the control of Himalayan balsam (Figures 5 and 6).  In total 25 people took part (around 20% of Laide’s population!) and across the two years the volunteers contributed a total of nearly 200 hours of effort.  In addition to this was the work put in by homeowners and their helpful neighbours who lent a hand to remove balsam from each other’s gardens.

It was clear that the community of Laide had started to take ownership of the Himalayan balsam problem and its control – perhaps best demonstrated by the small piles of balsam that would magically appear on the verge by the main road or by the path through the community woodland as other members of the community joined in and left evidence of their work.

Within the community the issue of Himalayan balsam is now increasingly well-known about and the distribution of balsam in the Sand Burn and associated ditches, drains, gardens and crofts is well understood.  From the initial volunteer sessions a wider community effort had been generated which has been successful in tackling the management and removal of the balsam.

It is hoped that the momentum created and enthusiasm generated in Laide in the last two years can be maintained and that Himalayan balsam presence in the Sand Burn catchment can be further reduced through continued community effort. The community are already close to being self-supporting - giving one another a helping hand, especially in the more challenging crofts and gardens, and having a clear understanding of the task at hand.

In 2022 there is likely to be a reduced level of support available from the Skye and Lochalsh Rivers Trust to support this work at Laide - this will test the resilience of this community-based control model.   Following the success of the work in Laide there is interest in starting similar community-based approaches to Himalayan balsam control in the villages of Aultbea and in Badcaul – this is likely to require support from the local river trust initially.

The main success of the programme in Laide comes from the nature of the village itself - the way the community took the project to heart and pulled together demonstrated true community spirit and a dedication to their local environment.  Himalayan balsam has become a talking point within the community and these discussions both helped inform us about plant distribution but also allowed local people to deal with balsam patches near their homes with the help of others in the community.

In practical terms, one of the biggest challenges to the efficacy of the control programme and the complete eradication of Himalayan balsam from the Sand Burn is the nature of the catchment landscape itself.   Many of the ditches where Himalayan balsam thrived were overgrown with brambles, had steep banks and deep peaty pools.

The volunteering sessions were adapted accordingly to these circumstances – for example running shorter sessions rather than full days and selecting work locations appropriate to the volunteers present.  Maintaining a flexible and location specific approach to volunteer group management dependant on the task, site conditions and ability and fitness of the volunteers was essential in maintaining volunteer engagement and enthusiasm.