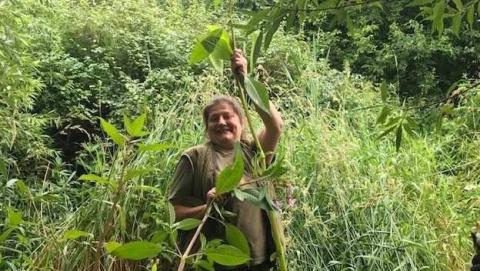 In response to the need to tackle invasive Himalayan balsam on the lower River Beauly catchment the Beauly Fishery Board worked with local land managers and community volunteers to set up the ‘Beauly Balsam Bashers’ – a volunteer-led group, working under the guidance of the Fishery Board.

The group had a successful first year of action in 2021 and tackled all the priority areas earmarked for Himalayan balsam control, surveyed the lower catchment for invasive plants and made plans for work in 2022.

Himalayan balsam grows on the banks of the Lower River Beauly and on a few tributary burns in the lower catchment where it dominates and shades out native plants causing biodiversity loss.  It also destabilises the banks leading to soil erosion in the winter when the annual plant dies back - this released silt enters the water and can smother valuable freshwater habitat.

To tackle the Himalayan balsam problem the Beauly Fishery Board, a delivery partner in the Scottish Invasive Species Initiative, initiated a project in early 2021 to work with the local land manager, Lovat Estates, and community volunteers to take coordinated and cohesive action.

An initial meeting was organised at the start of the year with Lovat Estates, the Beauly Eco-Friends group and any local people keen to get involved.  A number of people committed to the project and the ‘Beauly Balsam Bashers’ was formed. Two volunteers – Steve and Niki – were nominated to lead and help co-ordinate the group.

Locations of Himalayan balsam were identified and volunteers adopted specific sites to focus their balsam removal efforts upon (See Figure 1).  Other key landowners were contacted and gave permission for Himalayan balsam pulling to occur on their land.

When the Himalayan balsam started to grow the ‘balsam bashers’ were off!  They went out hand pulling balsam all along the lower Beauly – in pairs or by themselves where it was safe to do so (Figures 2 and 3).  To help get things going and to ensure that work was co-ordinated and effective lead volunteer Niki put out markers to highlight to volunteers where to go. 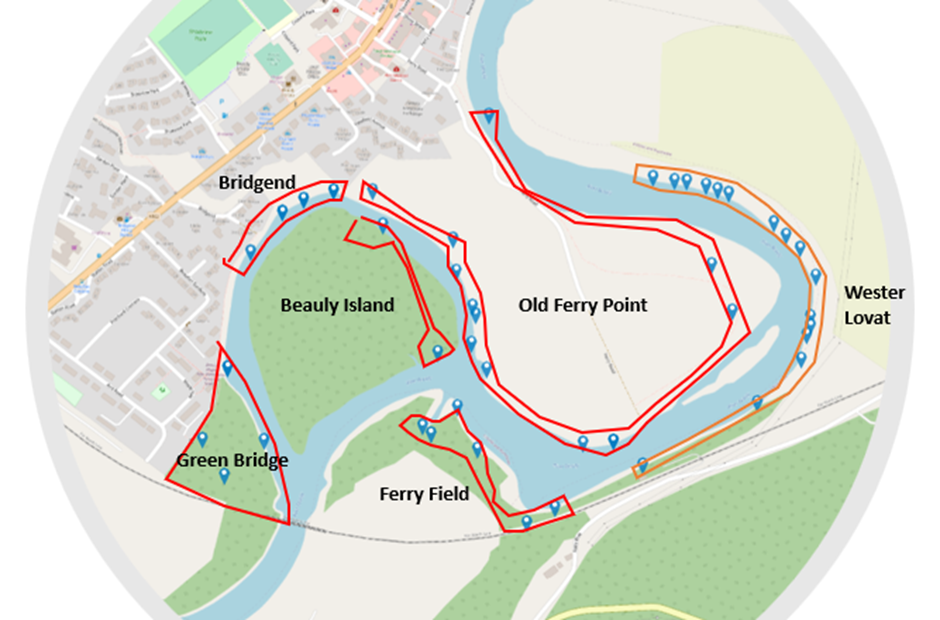 To support volunteer communications, keep folk engaged and co-ordinate volunteering efforts a group chat on a messaging app was set up.  This simple action was valuable in providing ‘Bashers’ with an effective means of letting each other know when they were heading out and so allowing others to join them.  Postings were also made throughout the year on the Beauly Eco-Friends facebook group to advertise sessions to join in with, report sightings and support community awareness raising.

To further support awareness raising and encourage more people and dog walkers to get involved by pulling balsam while out on their walk a ‘Join In’ section was set up between the Ferry Point and the Green Bridge.  In this section information signage was posted along the path and collection sacks put in place to hold pulled balsam. Lovat Estates collected the filled sacks to allow central composting of the removed balsam.  See Case Study – “Inspiring a community to join the control effort" for more details.

In August a survey was conducted by kayak by staff from the Beauly Fishery Board and lead volunteer Steve. This highlighted areas of Himalayan balsam (and other invasive plants) that had not been previously identified.   These harder to reach sites, including Beauly Island, were re-visited by staff from the Fishery Board and Steve to undertake control work (Figure 4).

At the end of the season a BBQ and review meeting was held to thank the volunteers and discuss plans for 2022 (Figure 5).  The group have kept working over the winter to cut back brambles and make control sites more accessible for volunteers.

The Beauly Balsam Bashers group, after its formation in 2021, has been successful in making a significant impact on the presence of Himalayan balsam in the River Beauly catchment.

Around 12 people got involved in the group and together contributed 150 hours of effort - equivalent to more than 20 days of work – alongside 32 hours of Beauly Fishery Board staff effort.

All the priority sites identified in Figure 1 and the upstream sites at Kinneras, Balblair and the Timber Yard were visited at least once (some on several occasions during the summer) and Himalayan balsam cleared from each.  Work at Beauly Island was particularly successful with no balsam being visible there at the end of the control season.

A clearer picture was gained of the overall presence of balsam in the catchment with new sites being identified by the group during the year, as well as the data from the survey.

After being set up under the guidance of the Fishery Board and land managers becoming familiar with the lead volunteers the group ran itself, with lead volunteer Niki communicating with others via messaging app and facebook about opportunities to get involved and gathering sightings etc.  The impetus of the group is apparent as work continued into the winter to ‘Bramble Bash’ – clearing sites to allow access for pulling next year.

The group was also very successful in getting people out of doors, socialising, and providing opportunities for people to make a difference in their local environment – something identified as being important locally post-Covid.

The Beauly Balsam Bashers group plans to continue its good work in 2022 after its positive start in 2021.  Himalayan balsam is expected to grow at control sites from seeds already present or which were dispersed in 2021.  Control work will be required in future years. Information from surveys carried out in 2021 will help to prioritise sites to control next year.  It is hoped that kayak surveys will be repeated each year to both monitor and assess the impact of the annual control efforts and inform future control locations.

Monitoring will also take place upstream of the current control locations – notably around the commercial quarry area near Lovat Bridge.  If infestations are identified here or elsewhere control will be started quickly.   Knowledge of upstream infestation sites is strategically important as such sites should be prioritised for control to prevent the downstream spread of seeds and materials which can become established at new locations.  The value of control at lower catchment sites can be undermined if upstream sites are not known and controlled.

The Scottish Invasive Species Initiative ends in October 2022 – after this time the level of support currently provided via the scheme to partners and then community groups is uncertain.  Therefore, the Beauly Fishery Board will work closely with the Beauly Balsam Bashers to identify required supports for the future to make the group sustainable and to maintain the valuable control work started in 2021 into future years.

Once set up the Beauly Balsam Bashers group has proved to be largely self-sufficient, being supported – but not led by – the Beauly Fishery Board.  However, in 2021 this was reliant on the two enthusiastic lead volunteers who took on the majority of the organising and promotional tasks of the group.  To further strengthen the resilience of the group for the future it would be valuable to extend the number of members able and willing to support these tasks.

The group and public communications delivered via social media and messaging have worked well and allowed members to keep in touch with each other and encourage others in the community to get involved.  Maintaining and strengthening communication activities will be important in keeping volunteers engaged and enthused.