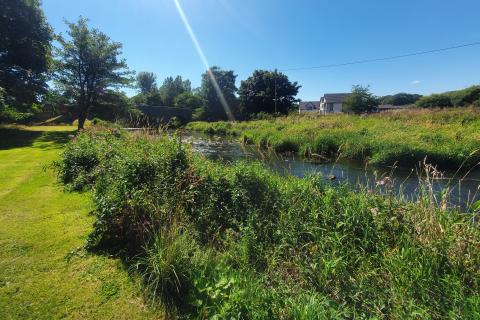 The Ravenscraig to Inverugie Bridge site on the mainstem of the River Ugie was the starting point of high abundance infestations of Himalayan balsam on the river. In 2018, Himalayan balsam was well established at the site, outcompeting native flora and increasing the likelihood of bank erosion and bank collapse. In addition, a stand of Japanese knotweed was present on the site, further exacerbating the risk of bank erosion. Control work was needed to tackle these issues and prevent further spread of either species downstream.

The Ravenscraig Castle to Inverugie Bridge site is in the lower course of the River Ugie and is approximately 1.1km long. Inverugie Bridge is approximately 3.3km upstream of the mouth of the River Ugie in the coastal town of Peterhead, where the Ugie flows into the North Sea. Land use is predominately arable farmland with riparian woodland on the left bank. 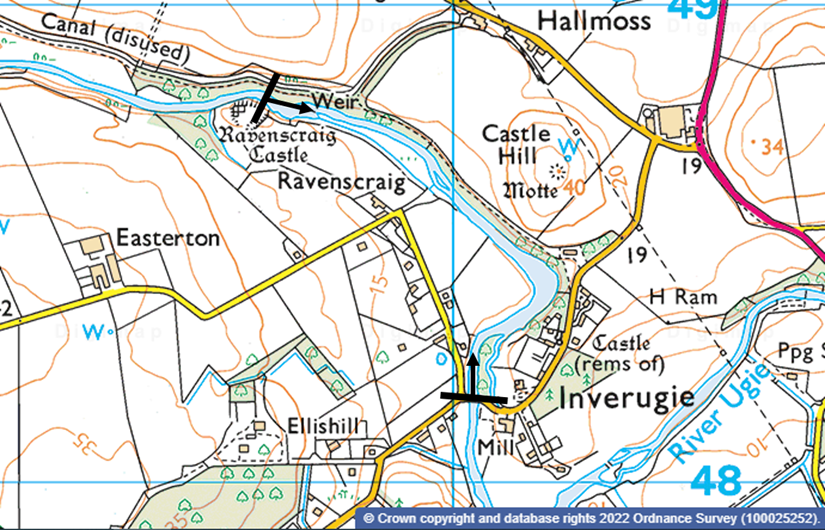 The upper limit of the site starts at Ravenscraig Castle (grid reference: NK 09604 48814) and ends at Inverugie Bridge (grid reference: NK 10047 48176) (see Map 1). Ownership is shared between several individuals including two major landowners - one of whom actively controls Himalayan balsam on their land, whilst the other gave permission for project staff and volunteers to carry out control on their land. Members of the Ugie Angling Association also assisted with control work.

Within the Scottish Invasive Species Initiative partnership, the Ugie catchment is covered by the Deveron, Bogie and Isla Rivers Charitable Trust.

While more sporadic low-density areas of Himalayan balsam can be found higher upstream, this site is where the high abundance infestations of Himalayan balsam start on the mainstem of the River Ugie. Seed, likely to have originated from an upstream source, has found ideal growing conditions on a bend of the river on the left bank, where it has become established and is now dominant. It has also spread further downstream from there, establishing to varying densities on both banks.

This section of the River Ugie was identified for control by the Scottish Invasive Species Initiative during surveys in 2018. When first identified, Himalayan balsam was the dominant species on the left bank of the river in many areas and occurred frequently on the right bank amongst other vegetation. Due to its high abundance, Himalayan balsam - and in one area Japanese knotweed - was outcompeting native ground flora. Himalayan balsam has a shallow root system making it easy to remove by hand pulling but both species increase the risk of bank erosion and bank collapse in winter when they die back leaving the banks exposed.

Once the Scottish Invasive Species Initiative alerted the two major landowners to the Himalayan balsam and Japanese knotweed problem, both were supportive of control taking place.  One helped to remove Himalayan balsam through mowing on their land whilst the other provided consent for control to take place through the project. Project officers, volunteers and members of the Ugie Angling Association carried out physical control here and elsewhere on the site.

Stem injection and spraying were used to treat Japanese knotweed. Table 1 below shows a summary of the control treatments.

Monitoring was undertaken at three representative points within the site from 2018/2019 to 2022. The abundance of Himalayan balsam and Japanese knotweed was measured using the DAFOR scale*. Recorded abundance of these invasive species at monitoring points is shown in Table 2 and Table 3 below.

Before control, the abundance of Himalayan balsam was ‘dominant’ on the left bank and ‘occasional’ or ‘frequent’ on the right bank. Following 3 or 4 years of treatment in 2018, 2019, 2020 and 2021, a reduction in abundance was observed at all monitoring points. By 2022, abundance had reduced to ‘abundant’ on the left bank at all monitoring points except for one where it was ‘frequent’, while still occurring as ‘frequent’ or ‘occasional’ on the right bank. This is shown by the recorded abundances in Table 2 and fixed-point photography at each site (see Figures 1a, 1b, 2a and 2b below).

Table 3 - Annual Japanese knotweed abundance from surveys (2018 – 2022) at Ravenscraig Castle to Inverugie Bridge, River Ugie. Only one knotweed stand was present at the site

In the first year of Japanese knotweed treatment, glyphosate (RoundUp Provantage 480mg/l) was applied by stem injector (2ml neat per stem) and in 2020 by foliar application by knapsack sprayer (at a concentration of 20ml per litre). The volume of glyphosate used per year is shown in Table 4 below.

Control work was carried out by landowners and by Scottish Invasive Species Initiative staff and volunteers. Table 5 and Table 6 (below) shows the people hours required to control each species by year.

The increase in hours spent on Himalayan balsam control in 2019 was due the discovery of a previously unknown infestation on the site and additional time contributions from volunteers. The increase in control hours from 2021 to 2022 was due to increased volunteer control effort.

Japanese knotweed was not discovered at the site until 2019.  Control was undertaken in that year and 2020 but no further plants were detected in 2021 and 2022.  Therefore, no control work was needed after 2020.

Control measures taken between Ravenscraig Castle and Inverugie Bridge on the River Ugie since 2018 have reduced both Himalayan balsam and Japanese knotweed abundance at the site.

The time required for Himalayan balsam control increased between 2018 and 2019 after an additional infestation location was discovered and control hours contributed by volunteers increased (see Table 5).  Hours spent on control then reduced by 15% between 2019 and 2022.

This is promising progress.  However, control will be required at the site for a number of years to continue to reduce the abundance of Himalayan balsam, prevent further seed production and exhaust the existing seed bank.  An annual check will also be required to ensure that no regrowth of Japanese knotweed occurs.

There has been some encouraging recolonisation of native flora in some areas of the site which will hopefully help to suppress the annual emergence and growth of Himalayan balsam seedlings in future years.

Himalayan balsam seedlings will emerge in 2023 and subsequent years due to the seedbank that remains in the soil (seeds can remain viable for up to 3 years) and from seeds brought to the site from upstream locations. For progress to continue at this site, annual control and monitoring will be required to prevent plants maturing and then setting and dispersing seeds.

If viable rhizome fragments of Japanese knotweed remain in the soil some regrowth might be observed from these in the coming years. Annual monitoring and control (if required) should be continued.

In time, with consistent control effort and continued support of landowners and volunteers, the existing Himalayan balsam infestation will be diminished and then eventually exhausted at the Ravenscraig Castle to Inverugie Bridge site on the River Ugie.  As the Scottish Invasive Species Initiative is currently scheduled to end in March 2023, discussions with landowners will be initiated to explore future management options for the site now that the scale of the problem has been reduced.