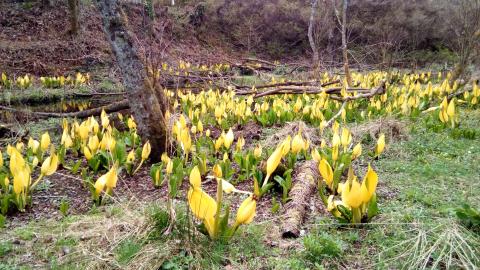 The Moulin Burn is a small tributary of the River Tummel which runs through the centre of the town of Pitlochry.  In 2018 the burn was identified as the most upstream source of American skunk cabbage in the Tay catchment – the plant having infested the burn from ornamental plantings in a private garden in the village of Moulin.

The American skunk cabbage was beginning to choke the burn, restrict flow and outcompete native species. In addition, it represented a significant threat to the River Tummel as a source of skunk cabbage to that major catchment – a small number of individual plants had already been found on the main stem of the river which had almost certainly originated from the Moulin Burn.

With the agreement of the landowners – Crown Estate Scotland - control worked commenced in 2019.  Contractors undertook the work in 2019 and 2020 with Scottish Invasive Species Initiative staff doing so in 2021.  Based on annual survey results and records of annual control effort and chemical volume applied this control has successfully and substantially reduced the abundance of American skunk cabbage present.  The owners of the garden containing the original plants in the catchment are now preventing any further spread from their land through seed head removal and the gradual removal of plants there.

Further monitoring and control work on the Moulin Burn will be undertaken by Scottish Invasive Species Initiative staff in 2022.  Alongside this work discussions will be initiated with Crown Estate Scotland - to explore ongoing control there after the close of the current project.  Dialogue will be continued with the garden owners to ensure continuation of their containment work to prevent re-infestation of the Moulin Burn with new American skunk cabbage plants.

The Moulin Burn flows through the village of Moulin and the town of Pitlochry before joining the River Tummel below the power station dam at Loch Faskally.  The control site is a 1.4km section starting above Moulin (upstream limit at grid reference NN 94432 59526) which extends through a central residential area of Pitlochry and ends where the burn is culverted under the town centre at grid reference NN 93906 58362.  The site location is shown in Map 1.

The burn is owned by Crown Estate Scotland and managed on their behalf by Bidwells LLP Perth.  Within the Scottish Invasive Species Initiative partnership the Tay catchment is covered by the Tay District Salmon Fishery Board (TDSFB).

The Moulin Burn runs close to the A924 road above Pitlochry but is largely hidden behind gardens and, aside from a small area where it runs through a playground, not generally accessible to the public.  Within the Pitlochry section the burn passes through areas of concrete and natural channel with small broadleaf trees either side.

There is a large pond where American skunk cabbage has accumulated about two thirds of the way down the section at grid reference NN 9408 5857. 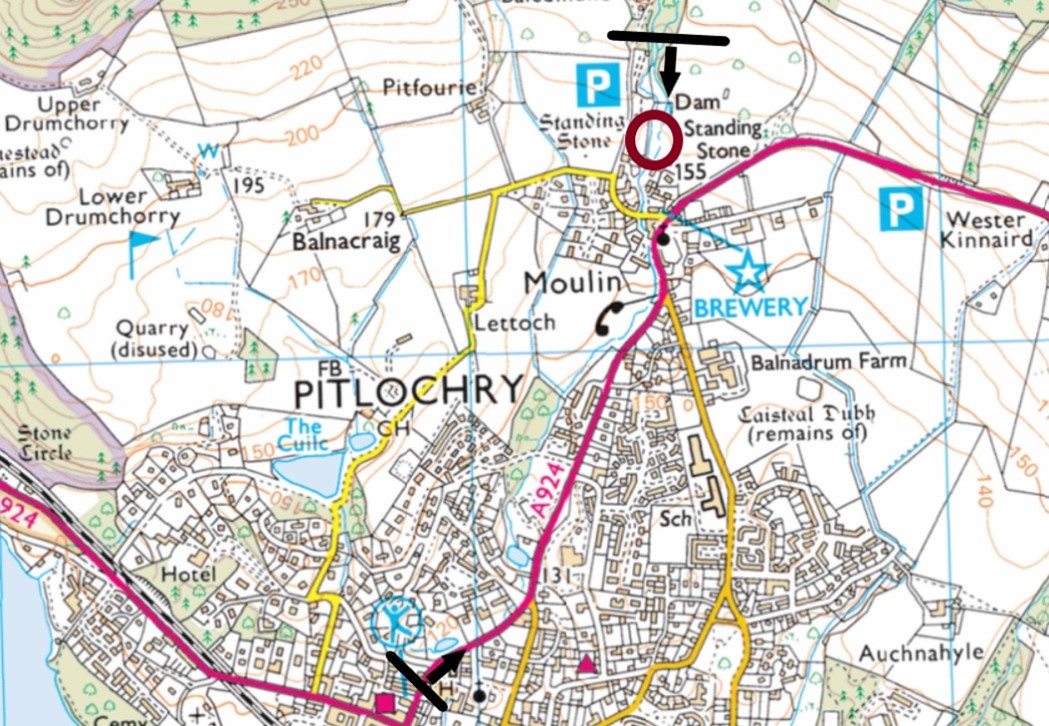 The American skunk cabbage found along the Moulin Burn had spread there having escaped from an ornamental planting in private garden in the village of Moulin.  Exactly when the plant spread beyond the garden is unclear - but as the burn runs directly through the garden its escape is not surprising.

By 2018 American skunk cabbage growth dominated areas of the burn – particularly around the pond part way down the burn in Pitlochry.  Individual plants had also reached the main stem of the River Tummel and threatened to spread further downstream into the wider River Tay catchment.  There was significant risk of the plant becoming established in the Tay system unless this source population on the Moulin Burn could be tackled.

After meeting with Bidwells, it was decided that contractors should be deployed to try and quickly bring the problem under control and prevent further spread downstream.  Following the sale of the property holding the original source population the new owners agreed to remove seed heads (to prevent further seed spread) and to systematically dig up remaining plants in their garden.

The American skunk cabbage on the Moulin Burn was treated for the first time in 2019 with control continued annually in 2020 and 2021.  Glyphosate (Round-up ProVantage) was applied by foliar spray (spraying directly onto the leaves of the plant) by backpack sprayer with a single application made in each year.

As agreed with the landowner’s agent contractors were deployed in 2019 and 2020 to more quickly bring the site under control.  Project staff delivered control in 2021 to treat the reduced levels of regrowth which were present.

When American skunk cabbage was first observed by the Scottish Invasive Species Initiative on the Moulin Burn in 2018 (see Figure 1a) it was recoded as ‘dominant’ in abundance using the DAFOR scale.  This situation remained in 2019 (See Table 2) prior to control work taking place that year.

Following control in 2019 and 2020 abundance was reduced firstly to ‘occasional’ and then to ‘rare’ in 2020 and 2021.  The abundance of invasive species was measured using the DAFOR scale* in each year and is shown in Table 2 below.

In all years of treatment glyphosate was applied by backpack sprayer at concentration of 20ml per litre.  The volume of glyphosate used per year is shown in Table 3 (below).

Control work was undertaken by contractors in 2019 and 2020 with project staff completing the 2021 treatment.  Table 4 (below) shows the effort in terms of hours of control work spent on the site.

Work to control American skunk cabbage on the Moulin Burn since 2019 has reduced the abundance of the plant at the site and significantly reduced the time and chemical volume required to maintain control in subsequent years.

This is demonstrated by the change in abundance of the plant observed (see Figures 1 and 2) – which show large reductions in the extent of American skunk cabbage present - and in the DAFOR scores at monitored points which recorded abundance reduced from ‘dominant’ to ‘occasional’ and ‘rare’ respectively in 2019, 2020 and 2021.

Progress is also shown in terms of both the hours of work needed to treat American skunk cabbage along the burn and the chemical volumes used in this treatment.  Hours required to control, and chemical volume used reduced by 91% and 97% between 2019 and 2021 respectively.

Management at this site was particularly effective due to the employment of contractors to control the American skunk cabbage initially when it was present at high densities and when the risk of this location being the source of new infestations downstream on the River Tummel and Tay was at its most acute.  By containing and working toward the eradication of the infestation on the Moulin Burn and by treating individual plants that had already escaped onto the Tummel, that risk is now much reduced.

Whilst the owners of the garden containing the original source population of American skunk cabbage have not agreed to allow chemical control in their garden, their undertaking of manual control to prevent further spread from there is significant and necessary.  Engagement with the garden owners will continue in order to support their containing control work.

The approach adopted on the Moulin Burn is consistent with the Scottish Invasive Species Initiative model of utilising contractor deployment at severe infestations before transitioning to control by staff, volunteers and land managers as plant infestations are brought under control and become manageable.

In 2022 American skunk cabbage control will be continued on the Moulin Burn and delivered by Scottish Invasive Species Initiative staff.  Alongside this dialogue will be continued with the owners of the garden source of the original infestation to ensure essential containment work there is maintained.

The project will also engage with Crown Estate Scotland and their agents (Bidwells) to seek to negotiate the transfer of ongoing control along the Moulin Burn to them as site owners.  Now that the scale of the problem is reduced the effort required to continue management work at the site is much less burdensome.

If secured, such an agreement would provide a sustainable solution to the American skunk cabbage infestation on the Moulin Burn and, ultimately, seek to eradicate the plant from the burn and prevent its spread more widely in the Tummel and Tay catchments.