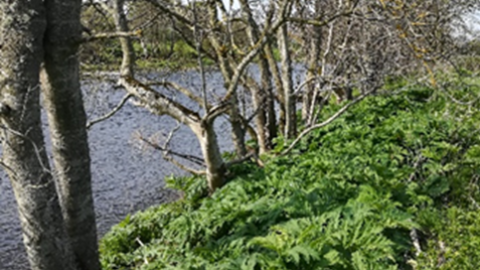 The Inglesmaldie site is part of the larger Inglesmaldie fishing beat on the River North Esk.  The beat has been divided into sections to better facilitate the control of giant hogweed which is present throughout.  This giant hogweed infestation at Inglesmaldie has been identified as the uppermost in the catchment and so represents a key location in the wider control programme of the Scottish Invasive Species Initiative.

Little or no attempt had been made to control giant hogweed at the site previously – aside from flailing at a small area around the fishing hut which helped to provide angler access but made no impact on the overall problem.  Working with the land manager the Scottish Invasive Species Initiative has undertaken chemical control at the site from 2019 - 2021.  Based on annual survey results and records of annual control effort and chemical volume applied this control has successfully and substantially reduced the abundance of giant hogweed present.

Annual monitoring and control should continue at the site to treat giant hogweed seedlings which are likely to emerge from the seedbank present in the soil.  By preventing plant maturation and seed setting the seed bank will be diminished and the infestation reduced.  This will take several years but after initial control efforts this is now a manageable task.

The Inglesmaldie site is a 700m section of left bank within the larger 2.6km Inglesmaldie fishing beat on the River North Esk near Marykirk in Angus.  The section starts beside North Water Bridge (Grid ref. NO 65263 66162) and ends just below the confluence with the Luther Water (Grid ref. NO 65991 66330).

Inglesmaldie is privately owned and let for salmon and sea trout angling.  Within the Scottish Invasive Species Initiative partnership the North Esk catchment is covered by the Esks District Salmon Fishery Board.

The site is one of gentle banks with mixed broadleaf trees running along the water’s edge which back on to arable farmland. 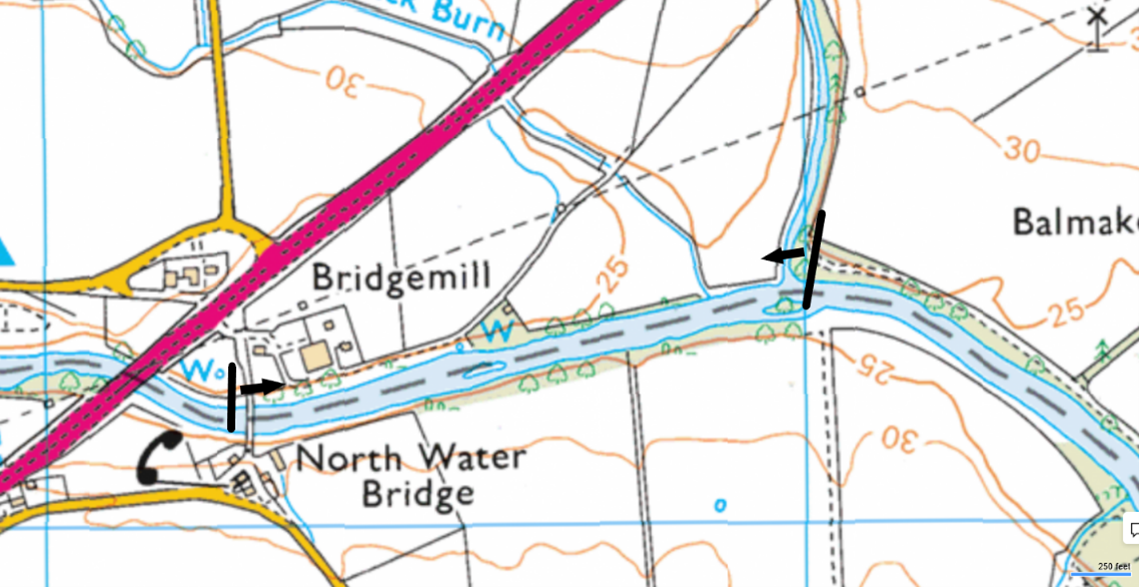 Giant hogweed has been present in the North Esk catchment for many decades with the Inglesmaldie site amongst the most upstream in the catchment where it occurs – therefore if control can be achieved here re-infestation from above is unlikely.  Control here would also help in the management of giant hogweed downstream by preventing the transfer of materials from this site to other locations.

At Inglesmaldie giant hogweed was growing in dense single species stands where it was outcompeting native flora and had become the dominant riparian plant on the lower beat.   Giant hogweed also causes problems by restricting river bank access for angling and presents a significant public health risk due to its phytotoxic sap which causes skin burns.

The giant hogweed had spread through the beat over time and by 2019, when the Scottish Invasive Species Initiative became involved, the infestation at Inglesmaldie was severe.   After discussion with the landowner, it was decided that contractors would need be deployed to try to bring the situation to a manageable state with an aim to moving to local control thereafter.

The giant hogweed at Inglesmaldie was treated for the first time in 2019 with control continued annually in 2020 and 2021.  Glyphosate (Round-up ProVantage) was applied by foliar spray (spraying directly onto the leaves of the plant) by backpack sprayer with a single application made in each year.

Due to the severity of the initial infestation spraying was undertaken by contractors in 2019 and 2020 with project staff and volunteers completing this work in 2021 when the abundance of giant hogweed had been reduced to a manageable level by the contractor work.

When work began at Inglesmaldie in 2019 giant hogweed was recorded as ‘dominant’ in abundance using the DAFOR scale at three representative monitoring points (see below Table 2 and Figure 1).

Following control in 2019 abundance reduced significantly at all monitoring points to ‘rare’ and ‘occasional’.  This status was maintained in 2020 and 2021.

In all years of treatment glyphosate was applied by backpack sprayer at concentration of 20ml per litre.  The volume of glyphosate used per year is shown in Table 3 (below).

Control was undertaken in 2019 and 2020 by contractors with project staff and volunteers completing the 2021 treatment.
Table 4 (below) shows the effort in terms of hours of control work spent on the site.

Work at Inglesmaldie in 2019 has reduced the abundance of giant hogweed at the site and significantly reduced the time and chemical volume required to maintain control in subsequent years.

This is demonstrated by the change in abundance of the plant at monitoring points (see Figures 1, 2 and 3) -which show large reductions in the extent of giant hogweed observed on site, and in the DAFOR scores at monitored points which recorded abundance reduced from ‘dominant’ to ‘rare’ and ‘occasional’ respectively.

Progress is also shown in both the hours of work needed to treat the giant hogweed infestation and the chemical volume used in this treatment.  Hours required to control, and chemical volume used, reduced by 96% and 93% between 2019 and 2021 respectively.

Management at this site was particularly effective due to the employment of contractors to control the giant hogweed when it was present at high densities.  This approach is consistent with the Scottish Invasive Species Initiative model of utilising contractor deployment at severe infestations before transitioning to control by staff, volunteers and land managers as plant infestations are brought under control and become manageable.

Inglesmaldie is one of the uppermost giant hogweed sites on the North Esk.  As such, controlling the plant here reduces the spread of hogweed downstream - as no seeds are set and washed to new locations where they can become established.  Equally, by bringing this site under control we can be confident that giant hogweed will not re-establish from materials brought to the site from upstream.  The importance of a catchment based approach to invasive plant management is demonstrated here – working systematically from the top of the catchment downwards is essential to have any prospect of control (and then eradication) of invasive plants which can be spread by river movements

Giant hogweed seedlings are likely to emerge at the site in 2022 and beyond – due to the persistent seed bank in the soil.

The primary objective at the site is to continue to control annually emerging plants to prevent them maturing and setting seed.  If achieved the extent of regrowth will decline as the seed bank is exhausted and the site will move towards being clear of giant hogweed.  However, this will take a number of further years to achieve and requires annual monitoring and control.

The site will be controlled in 2022 by project staff.  Alongside control work discussions with the land manager will seek to transfer responsibility for ongoing monitoring and control to them now that these annual and recurring tasks are manageable within resources available to them.

When achieved this will allow future giant hogweed control projects to target new sites downstream in the knowledge that control at Inglesmaldie will be delivered by the land manager.

Figures 2 and 3 show the change at monitoring points B and C over the three years of the management work.  At both sites the change in giant hogweed abundance is clearly visible, with the bare ground visible in 2020 gradually being colonised with native vegetation by 2021.