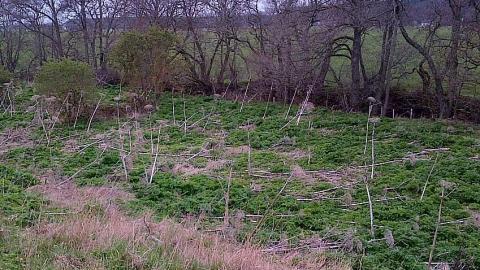 The Muckle Burn drains into Findhorn Bay in Moray.  Giant hogweed has been well established on the burn for many years with only limited attempts to control it. In June 2018, the Scottish Invasive Initiative identified a site on the Muckle Burn as a priority for control. This was in an area upstream of control locations existing at that time. The site, at the Old Mill in the village of Brodie, was sizeable, established and in full flower.  Giant hogweed control started at the site in 2019 and continued in 2020, 2021 and 2022.

Since annual control began in 2019, the abundance of giant hogweed has not changed – it remains the dominant plant at the site.  However, the effort and chemical volume required to deliver control has significantly reduced over the years since then.  In addition, the age classes of giant hogweed plants at the site has changed.  Initially the site had abundant mature plants present which were able to flower, set seed and maintain the infestation.  Since consistent control started the number of mature plants has reduced significantly – very few are now observed – and these are removed each year to prevent replenishment of the seed bank at the site.  Seedlings continue to emerge annually and are controlled to prevent maturation.

Annual monitoring and control was undertaken by the Scottish Invasive Species Initiative in 2022 but will be required for a number of years beyond this. There is an extensive seedbank present at the site which will take several years to exhaust.  By preventing plant maturation, seed setting and dispersal, the seed bank will be progressively diminished, and the infestation reduced.

We plan to initiate discussions about ongoing responsibility for control with relevant land managers and owners to help to secure future control at the site.

The Old Mill site is situated on the Muckle Burn to the south of the A96, at the village of Brodie in Moray (grid reference NH 980 567).  The control area, located on the right bank of the burn and accessed via the nearby caravan park, extends to about 0.6 ha and is 150m long by 40m wide, with a steep bank on the southern boundary.  The site location is shown in Map 1.

Previously thought to be the uppermost infestation on the Muckle Burn, further stands have since been discovered upstream and are now being controlled.

Within the Scottish Invasive Species Initiative the Muckle Burn catchment is covered by the Findhorn, Nairn and Lossie Rivers Trust.

The Muckle Burn flows into Findhorn Bay, a large tidal bay also fed by the River Findhorn, the Mosset Burn and the Kinloss Burn.  The bay is popular with tourists and water sport enthusiasts and the presence of giant hogweed poses a risk to members of the public.  Findhorn Bay is a Local Nature Reserve and is part of the Moray and Nairn Coast Special Protection Area - designated due to its waterfowl assemblage and individual qualifying species list of bar-tailed godwit, dunlin, greylag goose, osprey, oystercatcher, pink-footed goose, red-breasted merganser, redshank and wigeon.

Due to the tidal nature and current patterns in Findhorn Bay, giant hogweed infestations in any river that drains into it – such as the Muckle Burn - are likely to spread seed and plant materials widely, thereby supporting the establishment of new areas of growth around the shores of the bay.

Map 1:  Location of the Old Mill giant hogweed control site on the Muckle Burn at Brodie in Moray 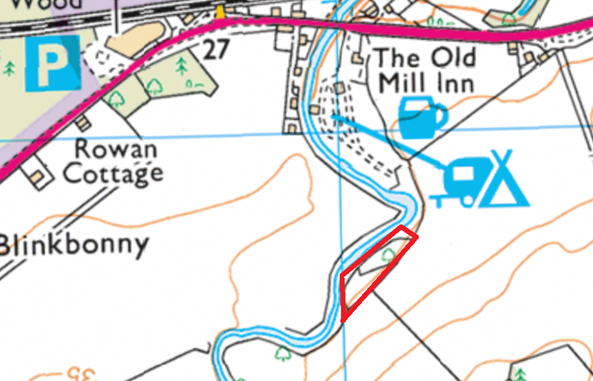 Giant hogweed has been present on the Muckle Burn for many years and is well established in numerous locations.  A coordinated programme of control has been delivered by the Findhorn, Nairn and Lossie Rivers Trust to tackle the plant in the catchment – this has both restricted further spread and reduced the scale of the problem in many locations. Limited control was carried out on the Muckle Burn and some landowners were controlling giant hogweed further downstream.

The Old Mill site in the village of Brodie was identified as a priority site in June 2018 - this was located upstream of control sites active at that time.  Additional surveys of the Muckle Burn above the A96 identified several more, smaller giant hogweed stands further upstream.  Therefore, it was essential to put in place control at the Old Mill – as the largest infestation – and at these smaller sites upstream, to prevent them acting as seed sources for downstream locations.

As the plant density at Old Mill was exceptionally high when identified in 2018, control in 2019 was scheduled early in the season to ensure safe access to the site before the plants grew so large as to make control dangerous.

The giant hogweed at Old Mill was first treated by the Scottish Invasive Species Initiative on 16 April 2019 - much earlier than spraying would normally begin due to the density of the growth anticipated at the site.  This allowed safe access throughout the season as the hogweed would not grow to a large size after early initial control.  Remaining flower heads were removed by manual cutting, prior to them setting seed, in June 2019.

Since 2019 glyphosate (Round-up ProVantage) has been applied by foliar spray (spraying directly onto the leaves of the plant) by backpack sprayer with a single application delivered in that year and subsequently in 2020, 2021 and 2022.  Flowering heads were also cut in 2019 and 2020 but this was not required in 2021 or 2022 as no plants reached this stage of maturity at the site.

The abundance of giant hogweed at the Old Mill site was very high when the site was identified in 2018. Giant hogweed growth was dominant and dense across many parts of the site. Initial treatment of the infestation took place in 2019 and annual control has taken place since then.  Prior to treatment each year, the site was scored using the DAFOR scale* - these records are shown in Table 2 (below). The abundance of giant hogweed has not changed since 2018 – it remains the dominant species on site.

From these plant abundance results alone, it may not appear that meaningful progress is being made following control - however, abundance alone does not tell the full story at this site.  There has been significant change in the age class of giant hogweed plants present.  In 2019, the majority of plants were fully mature and able to flower and set seed that year.  By 2021, the majority of plants were <1 year old and therefore unable to flower or set seed - very few mature plants were present.  In 2022, the situation was the same.  Following two treatment sessions, no viable flowers or seed heads were produced at the site.  This is important as it means that no new seeds are being produced to top up the seedbank and continue the infestation at Old Mill - or spread seeds to new locations.

This change in the age class of giant hogweed at the site is shown in Figures 1-3.

Pre-treatment in 2019 – first year seedlings have not emerged but second and third year growth is visible.  Multiple dead stems and flower heads are present from mature plants flowering and setting seed in 2018.

Pre-treatment in 2020 – the majority of plants are 2 years old and flower heads are absent.

Pre-treatment in 2021 - total site coverage of immature 1+ year plants not able to flower and set seed.  No flower heads from 2020 – indicating seed dispersal did not take place that year.

In each year of treatment glyphosate (Roundup ProVantage 480mg/l) was applied by backpack sprayer as a foliar spray at a concentration of 20ml per litre.  The volume of glyphosate used per year is shown in Table 3 (below). The chemical volume required for treatment has decreased steadily over the years, from 5.2L in the first year of treatment (2019) to 2.2L in 2020, 1.6L in 2021 and 1.2L in 2022.

Control work was undertaken by a combination of Scottish Invasive Species Initiative and Findhorn, Nairn and Lossie Rivers Trust staff and volunteers.  Table 4 (below) shows the effort in terms of hours of control work spent on site each year. The time required to deliver control has reduced significantly over the years, from 20 hours in 2019 to only 6, 4 and 5 hours required in 2020, 2021 and 2022 respectively.  The small increase in time allocation in 2022 was due to a follow-up visit being conducted a few weeks after the initial treatment.

The ongoing treatment of giant hogweed at Old Mill on the Muckle Burn has made progress in terms of the time and chemical volumes required for annual control.  However, giant hogweed still remains the dominant plant at the site.  Pre-treatment DAFOR scores indicate that giant hogweed remains as abundant in 2022 as it was in 2018.

Nevertheless, the age classes of plants present have markedly changed.  Initially the site held many mature plants capable of flowering, setting and distributing seed – thereby maintaining the seed bank at the site and infesting new locations downstream.  Flower heads were removed from mature plants in 2019 and 2020 but no such mature plants were found in 2021 or 2022.  Now that mature plants are no longer emerging, annual control of seedlings will reduce and eventually remove this infestation over time.

This is encouraging progress, but ongoing annual control will be required at the Old Mill site for a number of years to further reduce abundance of giant hogweed.  The plant has been well established at the site for a significant period and, following many years of successful flowering and seed dispersal prior to treatment, a large seed bank will be present in the soil.  As seeds remain viable for many years, consistent annual control will be required to make further progress and exhaust the seedbank.

Generally, we expect that established giant hogweed stands require 3-4 years of continuous effective treatment in order to reduce plant density as the various age classes are treated.  Giant hogweed normally matures in the third season of growth.  Therefore, the first 2-3 years of control are most onerous as large and mature plants are present.  Following this, there is an extended period of time where younger plants continue to emerge.  Consistent treatment of these seedlings over a number of years is needed to fully eradicate giant hogweed - this is the stage we have reached at the Old Mill site.

Giant hogweed seedlings will continue to emerge at Old Mill in 2023 and beyond due to the persistent seed bank in the soil.

Treatment will be required on an annual basis to prevent these plants maturing and setting seed at Old Mill - and potentially infesting areas downstream.  This will, in time, reduce the seed bank and the site will move towards being clear of giant hogweed.  However, this will take a number of years to achieve and will require annual monitoring and control.

The Scottish Invasive Species Initiative is currently due to end in March 2023.  Therefore, there is a need for the project to initiate discussions with the land manager / owner to look to develop a plan and approach to secure ongoing management at the site.  As the time and chemical volume required for annual control at Old Mill has been significantly reduced, ongoing treatment is now a more manageable task for the land manager and we will look to share (if the current project is able to secure continuation funding) or handover this responsibility for the future.