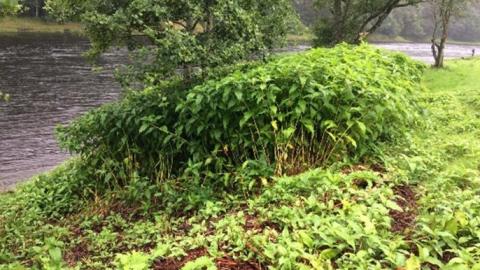 Newtyle is a 1.6km river section in the middle Tay, lying between Dunkeld (upstream) and Caputh (downstream).  The section was infested with Himalayan knotweed which had reached the site from an upstream ornamental garden.  Having reached Newtyle mechanical control was used there for a number of years to try and deal with the problem – this was not effective and helped to spread the plant both within the site and downstream through the movement of plant fragments.

The problem was identified by the Scottish Invasive Species Initiative in 2018 when the project began work with the land manger (Newtyle Fishings) at the site.  Initially mechanical control by strimming and mowing was ceased and control switched to pesticide application.  Separately, the project has initiated Himalayan knotweed control at the upstream ornamental garden to prevent further infestation from above.

The site has been surveyed annually and the results show a marked decline in abundance and control effort in 2020 and 2021 after work in 2018 and 2019.  These records indicate that management works using pesticide are being successful and the site is now largely under control.

Control works need to continue at the site to prevent regrowth and re-establishment from any remaining plant materials on the site. However, it is expected that this work will be much reduced in scale and that   the total removal of Himalayan knotweed from the site is achievable.

The Newtyle Beat is a popular angling location on the left bank of the main stem of the River Tay a short distance downstream of Dunkeld and Birnam.  The approximate mid-point of the site is at grid reference NO 04624 40535.  Within the Scottish Invasive Species Initiative partnership the Tay catchment is covered by the Tay District Salmon Fishery Board (TDSFB). 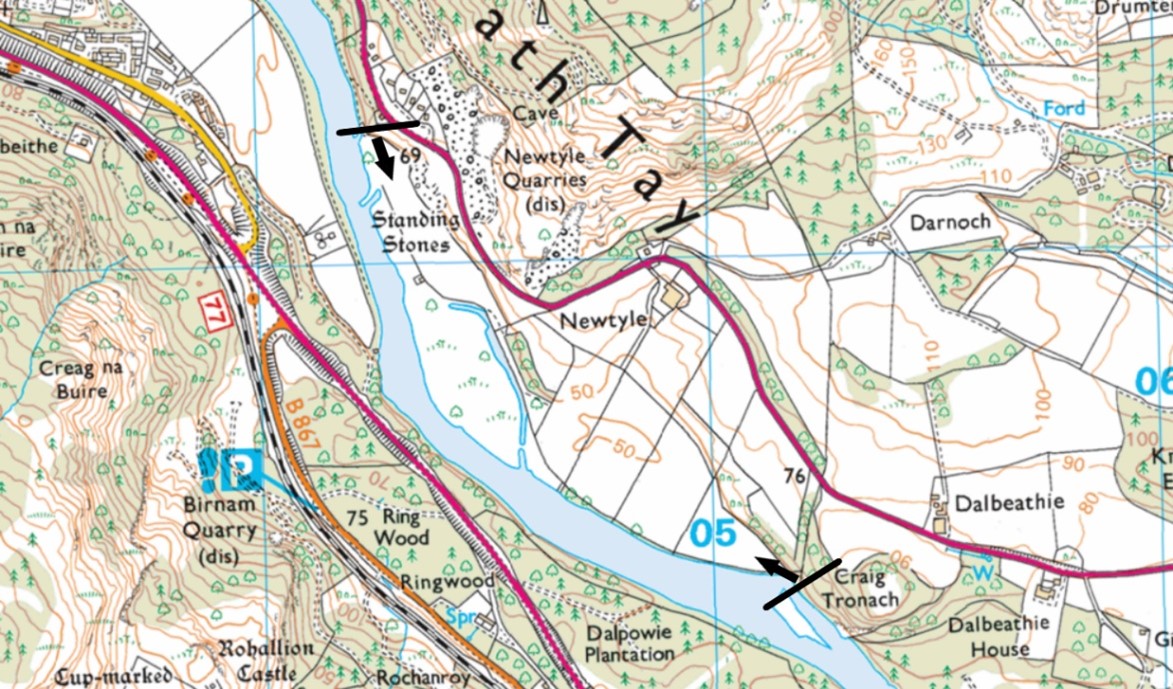 The site is a strip of grassland, wildflowers and shrubs which runs along the outside edge of fields used for grazing. Deciduous trees cover the opposite bank.

Himalayan knotweed is the most abundant invasive non-native plant present at Newtyle.  It is growing in dense monoculture stands and it is outcompeting the native flora on the site.  Due to its presence on the very edge of the riverbank it is also causing bank erosion – this could contribute to bank collapse and sediment being deposited downstream.  The Himalayan knotweed is also restricting the use of the river by preventing riverbank access for angling and other activities.

Despite not being the original source, Newtyle Beat became the primary source of Himalayan knotweed in the middle Tay due to the mechanical control used at the site for a number of years continuing to generate and spread plant fragments.  From here other downstream areas on the middle Tay, including in the Murthly, Caputh and Kinclaven areas, became infested.

The Scottish Invasive Species Initiative identified the scale of problem at the site in 2018 and approached the managers of Newtyle Fishings to discuss working in partnership to control the plant effectively.  Mechanical control by strimming and mowing was immediately ceased.  The Initiative then supported the local ghillie to gain chemical application qualifications and supplied spraying equipment, pesticide and advice to enable the appropriate pesticide application control to be undertaken.

The Himalayan knotweed was treated for the first time in 2018 with control continued annually in 2019, 2020 and 2021.  Glyphosate (Round-up ProVantage) was applied by foliar spray (spraying directly onto the leaves of the plant) by backpack sprayer with a single application made in each year.

Spaying was undertaken by the ghillie at Newtyle in years 2018-2020 with project staff completing this work in 2021.

Monitoring was carried out at two representative points within the site (referred to as points A and B in Table 2).  When work began at Newtyle in 2018 Himalayan knotweed was recorded as ‘dominant’ in abundance using the DAFOR scale (see below Table 2) at both monitoring points.  After the first treatment year there was an aggressive growth response by the plant and very little reduction in abundance noted – both monitoring sites continued to have Himalayan knotweed recorded as ‘dominant’ (see Figure 1a).

However, following a second year of control in 2019 abundance reduced significantly as rhizomes were compromised and limited regrowth followed.  Both monitoring points recorded Himalayan knotweed abundance reduced to ‘rare’ in 2020 and then ‘rare’ and ‘occasional’ in 2021 (see Figure 1b).

Images Before and After Control

The abundance of invasive species was measured using the DAFOR scale and is shown in Table 2 below.

Each year glyphosate was applied by backpack sprayer to deliver a foliar application at a concentration of 25ml per litre (see table 3 below).  This slightly higher dose rate (than the usual 20ml per litre application) was selected in recognition of the strong and vigorous growth of Himalayan knotweed at the site.

Control was undertaken in 2018, 2019 and 2020 by the ghillie at Newtyle who, following training, was qualified to do this.  In 2021 the ghillie left his position at Newtyle and so control was delivered by Scottish Invasive Species Initiative staff - to ensure that the gains made from 2018-2020 control were not lost.  The new ghillie was trained in survey techniques to ensure the monitoring and reporting of Himalayan knotweed presence was continued.

Table 4 (below) shows the effort in terms of hours of control work spent on the site.

The impacts of the Himalayan knotweed control work delivered at Newtyle since 2018 are significant.

This is demonstrated by the change in abundance of the plant at the site (see Figures 1 and 2) which show large reductions in the extent of Himalayan knotweed observed on site, and in the DAFOR abundance scores at monitoring points which recorded abundance reduced from ‘dominant’ to ‘rare’ and ‘occasional’.

Whilst in 2018 and 2019 a relatively high control effort was required at the site this reduced substantially in 2019 and 2020, with a reduction of 84% in the control hours necessary being observed (2018-2021).  Similarly, the volume of pesticide applied reduced by 87% over the same period.

Therefore, after four years of consistent, appropriate control work, the site has been brought into a state where future annual control and monitoring is significantly more manageable.  Whilst some regrowth may continue at the site in 2022 the effort required to control this is now locally deliverable and eradication of the plant at Newtyle is achievable and in reach.  Importantly, control of the Himalayan knotweed source at the upstream ornamental garden site is also in place – this will prevent-re-infestation from above and make the eradication objective at Newtyle achievable.

The Newtyle Beat shows both how the problems caused by incorrect treatment of invasive plants can be made worse – in this case this through the mowing and stimming of Himalayan knotweed – and also that the situation can be improved reasonably quickly once correct methods are use.

The support of the Scottish Invasive Species Initiative in providing advice to the land manager and funding the training for staff was instrumental in bringing about successful control at the site.  Control was primarily achieved by one employee deploying the correct control methods.

Previous mechanical control at the site (which distributed plant fragments widely) means that Himalayan knotweed regrowth persists at Newtyle – albeit the extent of this growth is much reduced. However, now that the majority of Himalayan knotweed growth at the site has been brought into a manageable state it can be controlled locally with a minimal time input and at low cost.

In 2022 Newtyle will be monitored for Himalayan knotweed regrowth which will be treated by project staff with the new ghillie.
Initiative staff will also seek to agree an approach for future management so that control can be maintained at Newtyle beyond the current Scottish Invasive Species Initiative programme which ends in October 2022.  This will include consideration of training for the ghillie to allow him to complete any further chemical control required.

By securing control at Newtyle, so that it is no longer the source of Himalayan knotweed materials infesting sites downstream, control of the plant at these other locations can now logically proceed.

Figures 2 (a, b and c) show the extent of Himalayan knotweed growth at the sites across subsequent years. The abundance reduces significantly following the two years of control delivered in 2018 and 2019.