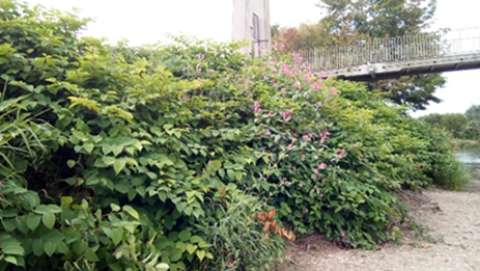 The Aberfeldy site on the upper River Tay is a 1.5km single bank section of riverbank in the town where Japanese knotweed was beginning to establish in a dominant fashion along the golf course side of the river.  There was a risk of further spread which, had this been allowed to continue would have seen  resulting negative impacts to biodiversity and further obstruction of the existing public footpath.

The site was identified in 2018, and after initial discussions with Aberfeldy Golf Club and Perth and Kinross Council a solution was identified to manage the site. Work commenced in 2020 carried out by Scottish Invasive Species Initiative staff and locally recruited and trained volunteers.

The resulting control led to a significant drop in Japanese knotweed coverage of over 90% after just one year of treatment.  In 2021 regrowth was much reduced, less vigorous  and of a quantity that a single member of staff from the Scottish Invasive Species Initiative could comfortably manage the follow up work as part of a sweep in the wider area.  Scottish Invasive Species Initiative staff and local volunteers from the Upper Tay Paths Group, who have adopted the site, will undertake a further year of survey and control in 2022.

The site is part of, and owned, by Aberfeldy Golf Course.  Within the Scottish Invasive Species Initiative partnership the Tay catchment is covered by the Tay District Salmon Fishery Board (TDSFB).

The riverbank at the site is a narrow strip of broadleaf woodland skirting the short mown grass of the golf course.  A well-used public footpath follows the treeline between the riverbank and golf course.

The Japanese knotweed at Aberfeldy was beginning to outcompete native flora where it grew in dense monoculture stands.  Whilst bank erosion was not identified as a current problem the main area of established Japanese knotweed growth was on a bend of the river which may be prone to erosion when soils are left exposed after summer growth has receded. 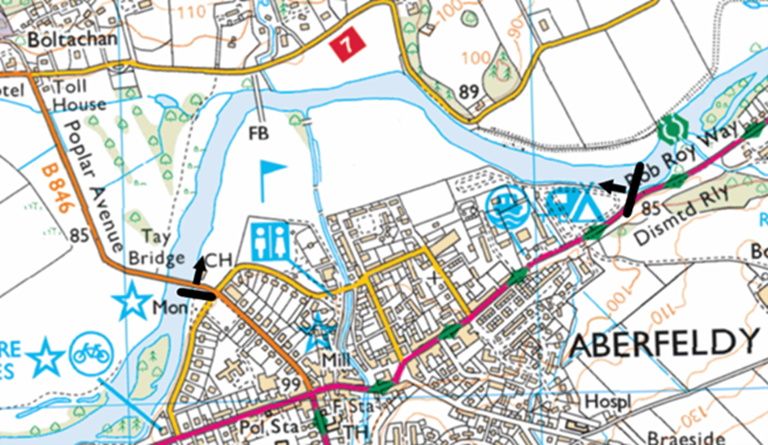 It is unclear when Japanese knotweed became established in Aberfeldy.  However, there are significant areas of the plant upstream of the site and so it is likely that plant fragments have grown after being washed into the site from these sources.  Once it arrived on site its growth began to obstruct the riverside footpath and further local spread is likely as evidence of trampling and broken stems by human activity were seen.

The Scottish Invasive Species Initiative assessed the site in 2018 and approached Aberfeldy Golf Club to discuss potential control options – this identified the potential to work with the Upper Tay Paths Group who have a wider area of work in the upper River Tay (not just including the golf course site) and who are supported by Perth and Kinross Council.  Discussions followed with the Perth and Kinross Council Greenspace Officer and it was agreed that control at the site would be started by Scottish Invasive Species Initiative staff with volunteer support with a view to the project providing training in pesticide application for interested volunteers from the Upper Tay Paths Group.   Ultimately, it was hoped that management of the site could be taken over by members of the Upper Tay Paths Group (supported and co-ordinated by the Greenspace Officer).

The Japanese knotweed was treated for the first time in 2020 with control continued in 2021. Glyphosate (Round-up ProVantage) was applied by stem injection (to deliver a stem specific chemical dose) in the larger more established growth areas and by foliar spray (spraying directly onto the leaves of the plant) to the smaller patches of growth.

In 2020 a second foliar spray treatment was delivered two months after the first to ensure all areas had been reached.  In 2021 only small regrowth was present which was treated by foliar spray.

Monitoring was undertaken at a single representative point within the site from 2018 to 2021 and the abundance of invasive species measured using the DAFOR scale*.  This showed that prior to control work starting in 2020 abundance of Japanese knotweed had increased from ‘frequent’ in 2018 to ‘abundant’ in 2019 and 2020 (see Table 2).

Following treatment work in 2020 Japanese knotweed abundance had reduced to ‘rare’ in 2021 (see Figures 1a, b and c).

Foliar spray applications were made in 2020 and 2021 using a backpack sprayer and delivered at a concentration of 20ml per litre.  Stem injection treatment was completed in 2020 with 2ml of undiluted glyphosate delivered to each stem.

Table 3 (below) shows the total volume of glyphosate used in each control year.

Table 4 (below) shows effort in terms of hours control work per year at the site.

The impact of the Japanese knotweed control work delivered at the Aberfeldy Town site in 2020 and 2021 is significant.

This is demonstrated by the change in abundance of the plant at the site (see Figures 1b and 1c) which show a large reduction in the extent of Japanese knotweed observed and in the DAFOR abundance score recorded which has reduced from ‘abundant’ to ‘rare’.

The effort needed to deliver control at the site has also reduced significantly between 2020 and 2021.  Reductions of 91% in control hours and 91% in the volume of pesticide applied were recorded.

To date control delivered by Scottish Invasive Species Initiative staff and volunteers has significantly reduced the scale of the Japanese knotweed problem at Aberfeldy.  This highlights the potential to make an impact on an emerging problem site if treatment is delivered relatively quickly after being identified.  The extent of the remaining problem at the site means that future control is more manageable and deliverable by local community effort and the risk of further spread downstream for this source is reduced.

Alongside control delivered in 2021 members of the Upper Tay Paths Group gained pesticide application qualifications supported by the Scottish Invasive Species Initiative.  The means that members of this local volunteer group can now take ownership of the monitoring and control required at the site in future years.

The scale of the Japanese knotweed problem at Aberfeldy has been significantly reduced and local volunteers are now qualified to deliver future control work at the site.

The small amount of control anticipated as required in 2022 may be delivered jointly by the Initiative and volunteer group.