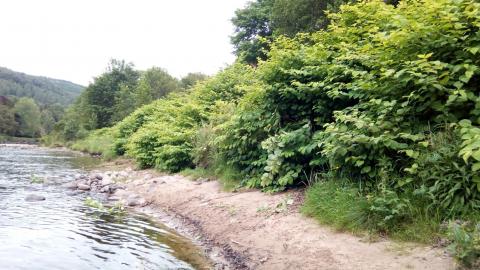 The Dunkeld Bridge site on the River Tay was dominated on both banks by Japanese knotweed which was impacting biodiversity, limiting public access, exacerbating bank erosion and contributing to the further spread of the plant.  Working with land managers and the local community, the Scottish Invasive Species Initiative initiated control of the knotweed in 2019 and continued this through 2020 and 2021.
The site was surveyed annually and the results of the surveys, annual control effort and materials used indicate that the control work has successfully and substantially reduced the presence of Japanese knotweed.
Annual control work should continue at the site to prevent regrowth and re-establishment from any remaining rhizomes.  Based on control undertaken in 2021 minimal ongoing effort is required to secure removal and prevent reinfestation in the future.

The Dunkeld Bridge site is in the middle section of the River Tay, downstream of the bridge at Dunkeld and Birnam. The site starts at Dunkeld Bridge (Grid ref. NO 026 424) and extends downstream for 600m along the left bank and 1000m on the right bank (see map below).
The right bank is under the ownership of the National Trust for Scotland (NTS) and the left bank is managed by the Dunkeld and Birnam Angling Association (DBAA).  Within the Scottish Invasive Species Initiative partnership the Tay catchment is covered by the Tay District Salmon Fishery Board (TDSFB). 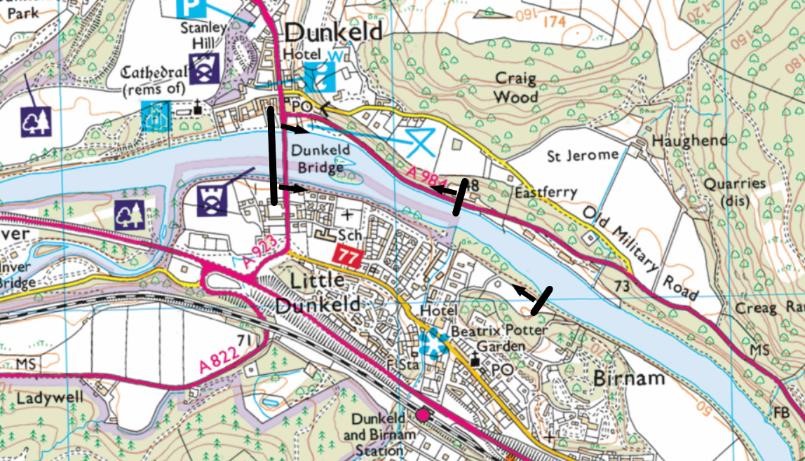 The right bank consists of a strip of mature woodland, of predominately sessile oak and alder, with some significant sized trees of biological and historical interest including the Birnam Oak.  A well-used footpath runs the length of this bank.  The left bank is narrow strip of land between the river and the road (A984).

Areas of Japanese knotweed are present on the River Tay upstream of this location.  However, this section had become infested by knotweed to a point where it was dominant on both the left and right banks to the detriment of native species.  There was local enthusiasm from land managers and river users to tackle the problem.

As well as the loss of biodiversity, the knotweed was contributing to an erosion problem on the right bank.  During the winter - due to lack of any other vegetation remaining on the bank – and after the knotweed died back for the season the sandy and loose soil was being steadily washed away.  Although hard reinforcement works had been undertaken on the left bank to prevent erosion the knotweed rhizomes were starting to shift some of the large boulders used for this and reducing their effectiveness.

The knotweed at this site was also observed to be suffering disturbance and damage – from both people taking access and from the local beaver population.  Knotweed fragments from broken and grazed stems were noted to be spreading downstream from the site.
The Scottish Invasive Species Initiative noted the scale of the knotweed problem during plant surveys in 2018 and approached both land managers (National Trust for Scotland and Dunkeld and Birnam Angling Association) to discuss control options at the location.  A co-ordinated control programme was agreed with both parties supporting control on both banks and the local Scottish Invasive Species Initiative Project Officer providing guidance, equipment and places on training courses to enable staff and volunteers from the two organisations and community volunteers to gain necessary pesticide application qualifications.

The Japanese knotweed was treated for the first time in 2019 with Glyphosate applied by either stem injection or foliar spray (spraying onto the leaves of the plant).  The application method and number of treatments was determined by the size of the plants initially and amount of regrowth observed.

In 2019 both banks were visited twice – initially treated by stem injection and then a follow up control around 6 weeks later by foliar spraying. The second visit was required as the knotweed was so persistent and strong that the first stem injection treatment only achieved a relatively low kill rate of approx. 80%.  Much of the knotweed sprayed on the second visit was a mix of small diameter stems that could not be injected in the first visit and a small amount of regrowth – a growth response by the rhizome to the initial treatment.  This double application in the first year delivered effective control and a significant weakening of the rhizome.

Surveys in 2020 were extremely encouraging with very little regrowth recorded.  As a result the right bank was foliar sprayed only while the left bank did require some minimal stem injection along with a follow-up foliar spray.

The 2021 treatment consisted of a single foliar spray on each bank.

The Tables 1 and 2 below show a summary of the control treatments.

The reduction in Japanese knotweed abundance after the initial treatments in 2019 was significant. Both banks saw a 90% - 95% reduction in coverage.  All that remained on both banks were small patches of stressed regrowth - suggesting that the rhizome had been fatally compromised and had very little energy left to support meaningful regrowth.

Similarly in 2021 a small amount of very highly stressed regrowth was all that was recorded during survey.

The abundance of invasive species was measured using the DAFOR scale and is shown in Table 3 below.

Glyphosate (brand name ‘Round-up ProActive’) was applied either by stem injection – using a measured dose of 2ml per stem - or by backpack spraying at a concentration of 20-25ml per litre.  Table 4 below shows the volume of pesticide applied at each site and confirms the large reduction in chemical dose required between 2019 and 2021 to undertake control at the site.

A number of people worked together and with Scottish Invasive Species Initiative staff to bring this site under control. This included countryside rangers employed by NTS, members of the DBAA and local community volunteers.  Several people gained formal pesticide application qualifications through support from the Scottish Invasive Species Initiative.

In total seven people helped with control works in 2019 and two in 2020.  None were required in 2021 as the site had improved to a point where project staff could easily sweep the site as part of other follow up work in the area.  Table 5 below shows the effort in terms of hours of control work spent on the site.

5.    Conclusions and Progress Made

The impacts of the initial control works undertaken in 2019 were significant and impressive.

This was demonstrated in 2020 and 2021 both by the on the ground observations (see Figures 1 (a-c) and 2 (a-c) below) which show large reductions in the extent of Japanese knotweed observed on site, and in the DAFOR abundance scores, which record reduced abundance from ‘dominant’ on both banks to ‘rare’ and ‘occasional’ on the right and left banks respectively.

As expected, there was some regrowth from knotweed rhizomes in 2020, however this regrowth was minimal. This trend continued in 2021 after control in 2020.  Only small, highly stressed regrowth appeared at the site at a further reduced abundance. This increasingly limited regrowth indicates that the remaining rhizomes have significantly depleted energy reserves and that control works are being successful.  This limited regrowth is reflected in the much-reduced level of control required in 2020 and 2021 where significant drops in both the volume of chemical applied and the number of hours of control work required were recorded.  The chemical use in 2021 (both sites) was 97% less than in 2019 and the hours of control work required decreased by 93%.

Native flora is beginning to re-establish on both banks of the site - which hopefully will help in suppressing future knotweed regrowth. 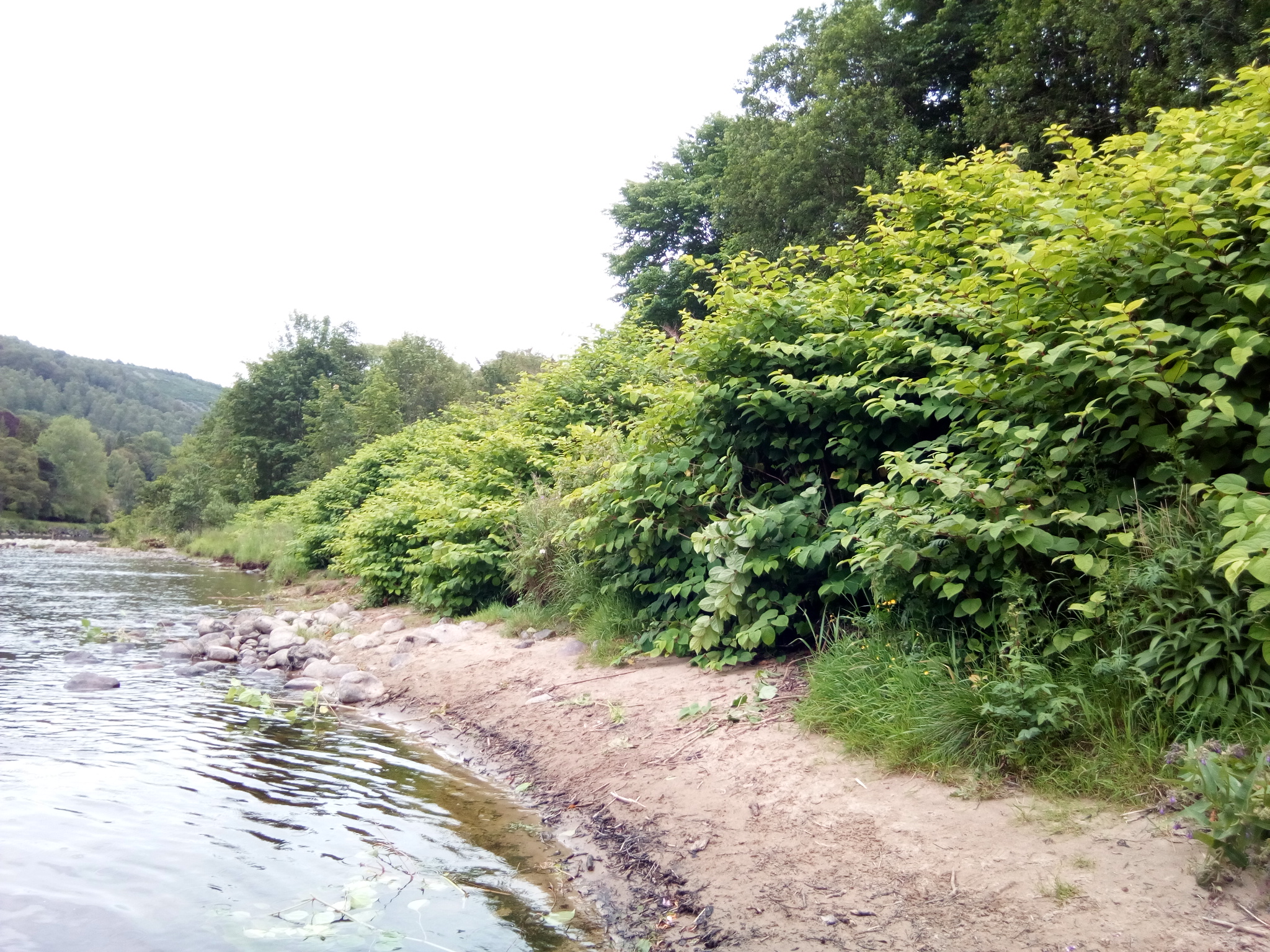 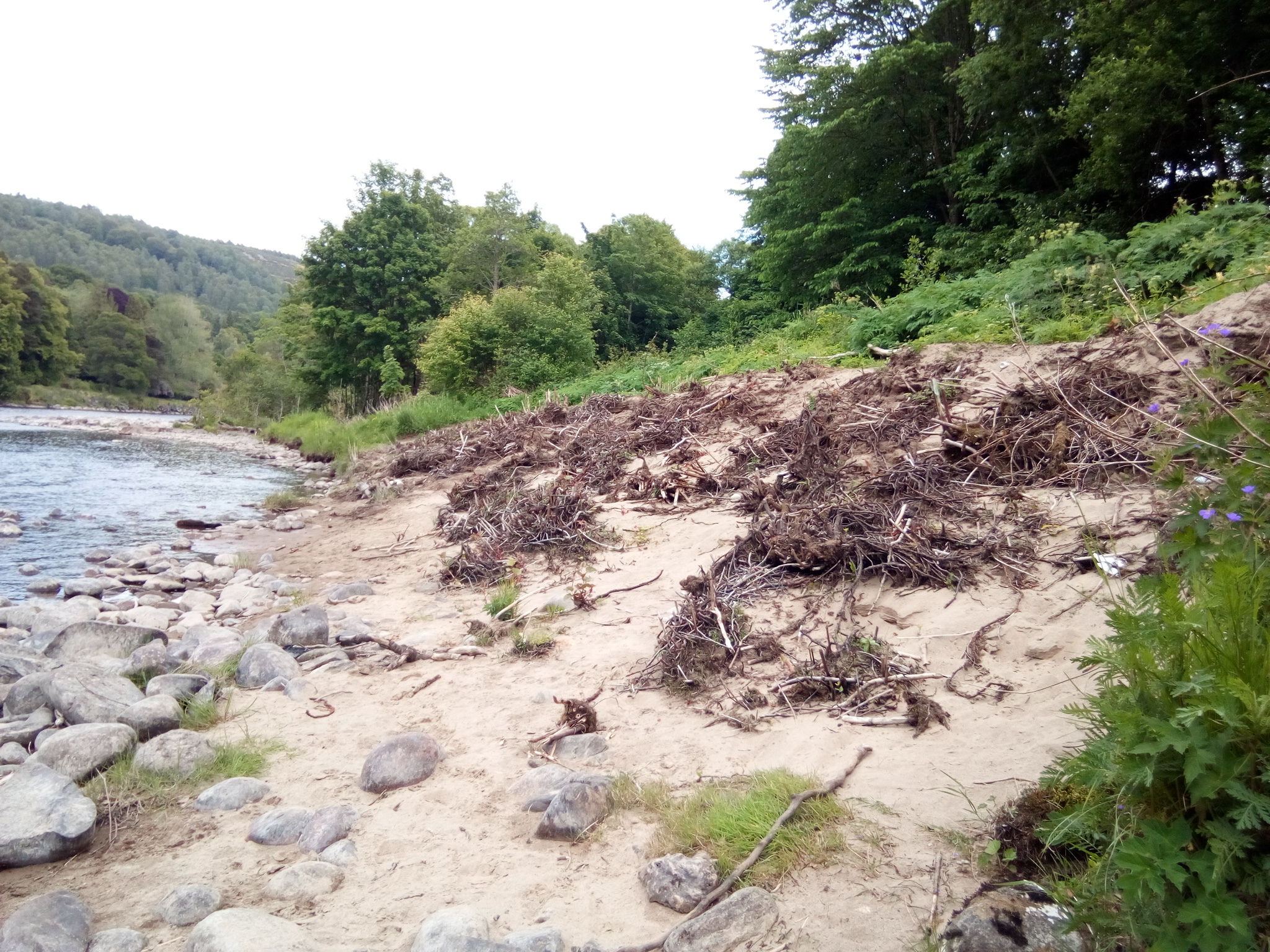 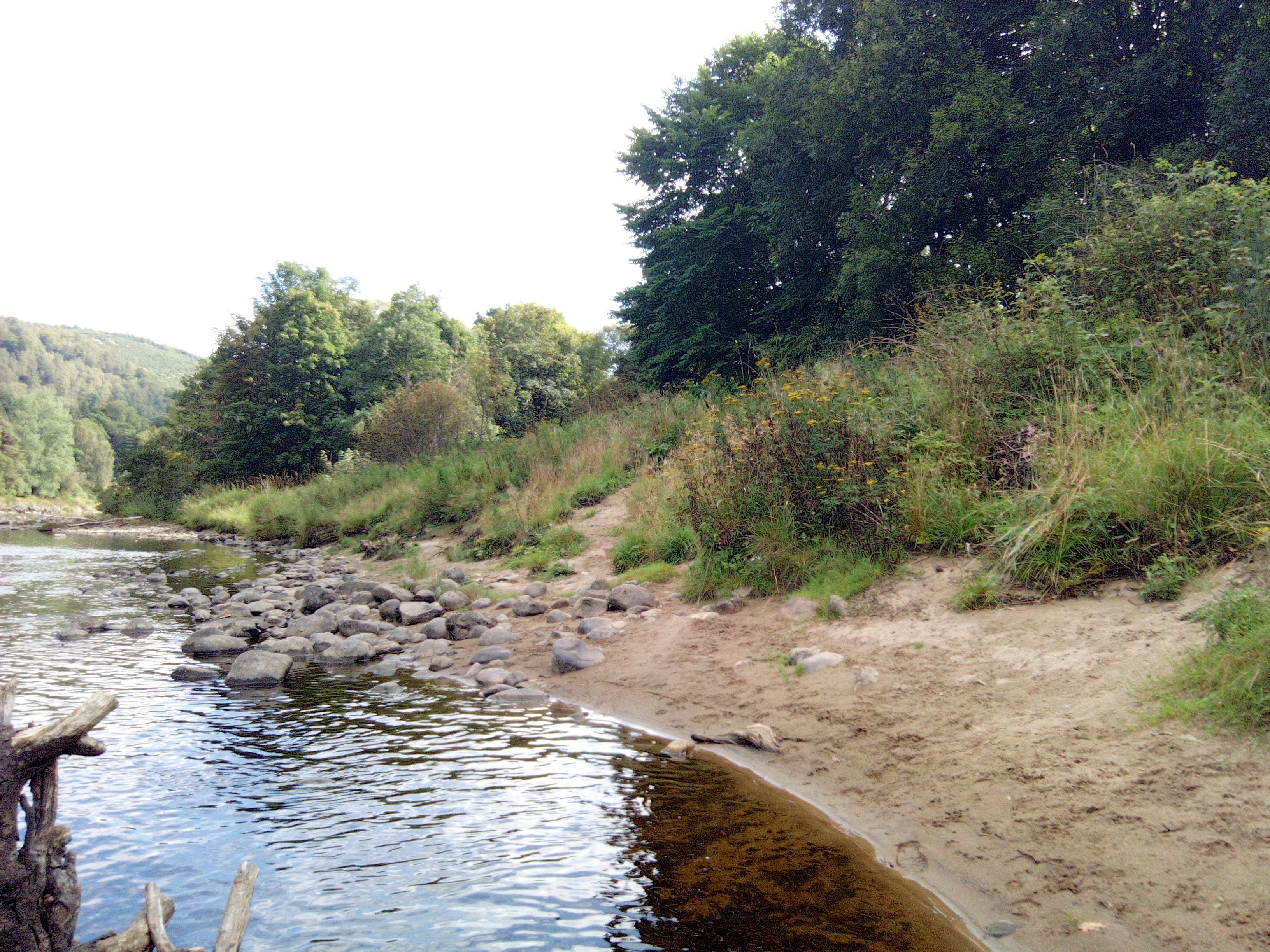 Figures 2 Left bank (from opposite bank) 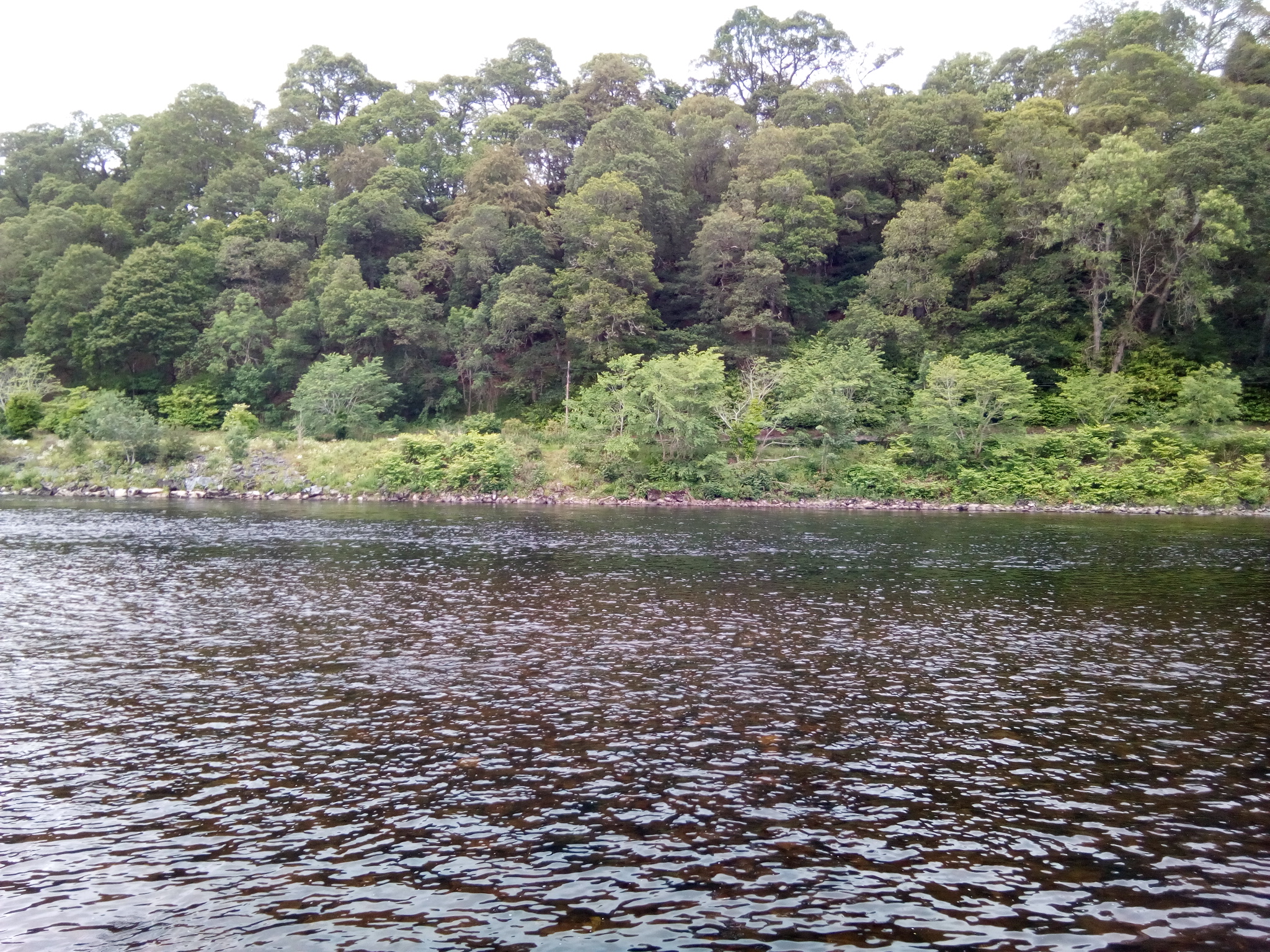 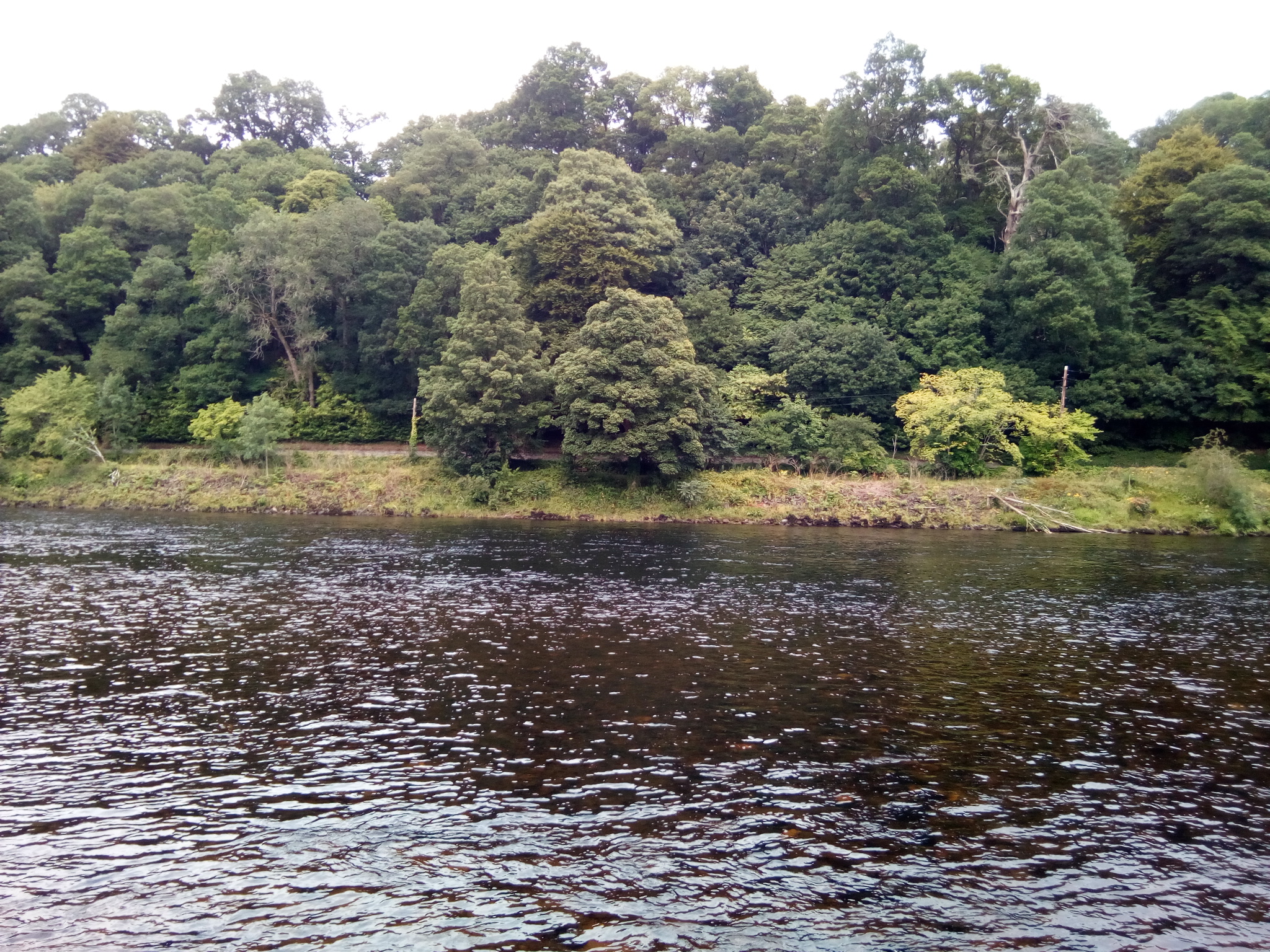 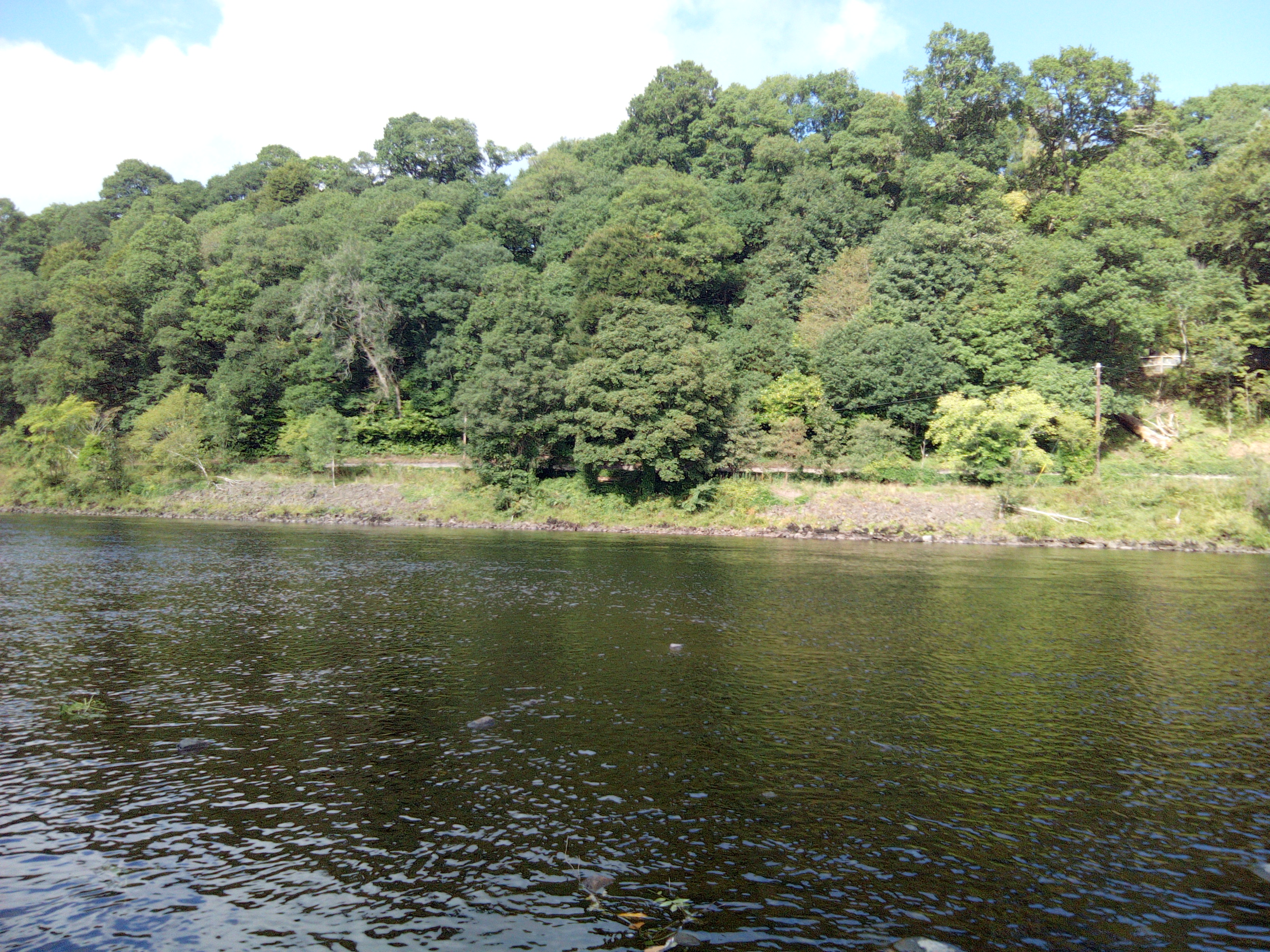 Future annual control visits will be required to spray any regrowth emerging from remnant rhizomes and ensure the site is not reinfested again.

Now the site has been brought under control and the extent of Japanese knotweed has been significantly reduced by control from 2019-2021 it is now in a manageable state.  As indicated by the reduced effort required over the last two years necessary control works are now minimal and can be undertaken by local qualified volunteers and/or land managers.

Download a copy of this site study as a pdf