Site Study: Japanese knotweed control on the Sheriff Burn, a tributary of the River Don, Aberdeenshire 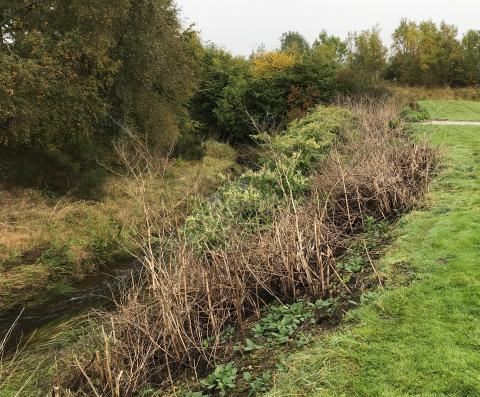 The Sheriff Burn is a small tributary of the River Don running through the village of Kintore in Aberdeenshire.

From 2018 access was granted from the landowner, Precision Oil Tools Ltd, allowing chemical control to take place. This was coordinated by the River Dee Trust as part of the Scottish Invasive Species Initiative.  Annual control has been required since 2018 due to the initial density and well-established nature of the Japanese knotweed infestation.  By 2021 the stand had been reduced in scale and extent and eradication is now a realistic proposition at the site.  Ongoing treatment of recurring plants is required to achieve this outcome.

This small, isolated section of Japanese knotweed present on the right bank of the Sheriff Burn has the potential to spread downstream and to the main River Don if not controlled.  The site is located next to a car park of a business park near the A96, which is immediately adjacent to the burn.

Within the Scottish Invasive Species Initiative partnership the River Don catchment is covered by the River Dee Trust.

Map 1:  Location of Japanese knotweed on the Sheriff Burn - a tributary of the River Don in Aberdeenshire 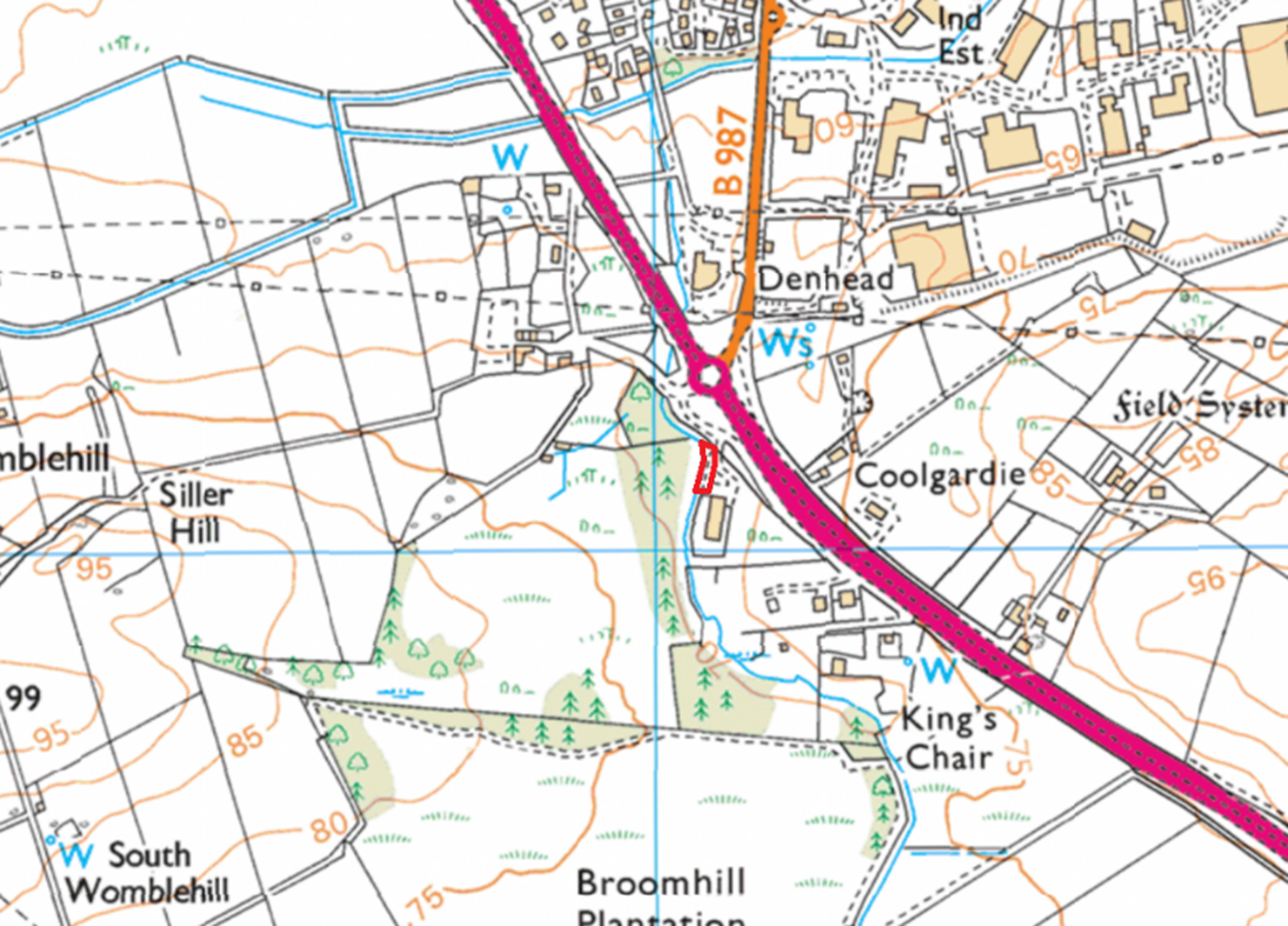 During 2011 the River Don Trust, assisted by volunteers and the Don DSFB, undertook a programme of invasive plant control supported by the Water Environment Fund – a fund managed by the Scottish Environment Protection Agency.

This programme supported the survey and mapping of invasive non-native plant species and created a pool of trained volunteers who were able to support local plant control.  Although local control was delivered successfully until 2013, overall progress across the catchment was slow due to the extensive and dense invasive plant stands identified.

This previous programme identified presence of Japanese knotweed on the Sheriff Burn site and, following discussion with the owner, became an active control site in 2018 as part of the Scottish Invasive Species Initiative.

The Japanese knotweed stand on the Sheriff Burn has been treated by the River Dee Trust since 2018 as part of the Scottish Invasive Species Initiative.

The stand was treated annually using glyphosate (Round-up ProVantage) applied as a foliar spray (spraying directly onto the leaves of the plant) by backpack sprayer.  Spraying took place at the time of flowering, in late September to early November.

A summary of the control treatments is presented in Table 1 (below).

Due to the small scale of the Sheriff Burn site Japanese knotweed abundance was recorded at a single monitoring point (grid reference NJ 7906 1412).

The abundance of Japanese knotweed was measured using the DAFOR* scale and is shown in Table 2.

The extent and abundance of Japanese knotweed on the Sheriff Burn remained unchanged over control years 2018-2020, with the plant recorded as ’dominant’.  However, both the extent and abundance of the plant was reduced in 2021 when it was recorded as ‘frequent’.   This meant that annual control consisted of spraying a declining number of emerging stems with very few plants strong enough to support the growth of a flowering head.

Chemical use was recorded on an annual basis at the site.  Glyphosate was applied as a foliar spray at a concentration of 20ml per litre.

Table 3 (below) shows the total volume of glyphosate used in each control year.

Control work was undertaken by staff from The River Dee Trust in all years and with volunteer support in 2021.

Table 4 (below) shows effort in terms of hours of control work per year at the site.  The consistently low time allocations reflect the small and localised nature of the infestation.

Japanese knotweed control on the Sheriff Burn has now taken place consistently for four years (2018 – 2021) with control also scheduled for 2022.  Initially, in the first two seasons, treatment targeted peripheral and edge plants and worked from the outside of the patch to the inside controlling the perimeter without being able to treat the plants in the centre of the stand.  This sequential approach delayed the anticipated reduction in Japanese knotweed abundance at the site until 2021.

By 2021 the extent and abundance of Japanese knotweed at the site had reduced.  Currently the stand consists of several small clumps of annual growth all of which are easily accessible for control.  Work due to be completed in 2022 is anticipated to require less effort than previous years and to move closer towards eradication of Japanese knotweed from the site.

Monitoring and necessary control work beyond 2022 will be essential to ensure eradication is achieved and to both prevent the regrowth of Japanese knotweed on the Sheriff Burn and ensure that the site does act as a source of material for infestation downstream and to the River Don.

The Don DSFB is committed to controlling Japanese knotweed across the River Don catchment and in particular in the Strathdon to Alford reach, having committed funds to bridge the time gap between funded control programmes.  It is likely that this approach would continue in the future alongside direct engagement with landowners to support local delivery.

The level of control work required in 2022 is anticipated to be less than in previous years.  Eradication of Japanese knotweed from the current Sheriff Burn site is achievable and will also prevent infestation of downstream locations on the burn and the River Don from this source.