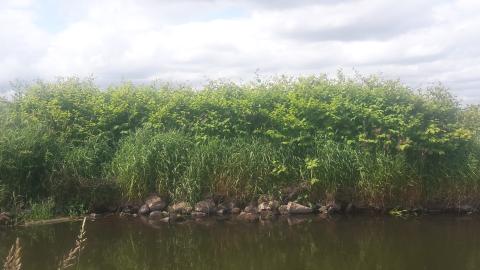 The Upper River Ugie mainstem site is a 7.5km double bank section of river running through farmland towards the village of Inverugie in Aberdeenshire. Japanese knotweed had formed a dense stand on the right bank in the middle of the site, shading out native vegetation and posing a risk to bank stability during winter dieback. There was also significant risk that the Japanese knotweed would spread further downstream, with a small stand already established in the next control site further downstream.

When the site was identified during surveys in 2018, the landowner was made aware of the problem and a treatment plan formed. Work commenced that year, carried out by Scottish Invasive Species Initiative staff and a volunteer. The landowner was trained through the project and agreed to take on responsibility for the site going forward.

This first year of treatment led to a significant reduction in Japanese knotweed cover with some regrowth in the following years which was treated by the landowner. The site will be checked in 2022 and we plan that the landowner will be responsible for any necessary follow up treatment.

Map 1: Location of Japanese knotweed (represented by red circle) on the River Ugie in Aberdeenshire 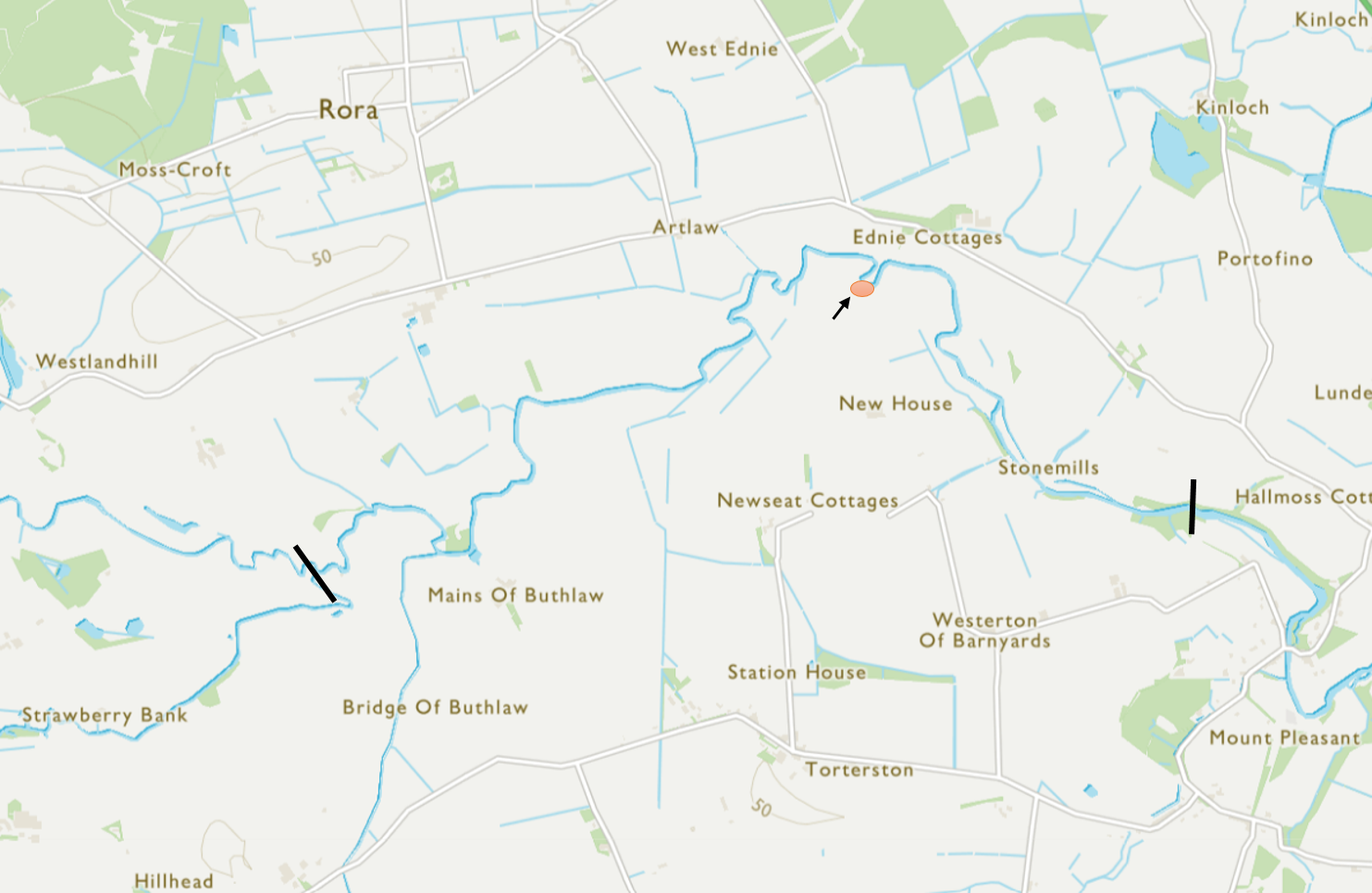 The entirety of the site is owned by a number of local landowners and the Japanese knotweed site is owned by one landowner. Within the Scottish Invasive Species Initiative, the Ugie catchment is covered by the Deveron, Bogie and Isla Rivers Charitable Trust (DBIRCT).

Japanese knotweed had established and formed a dense stand on a U bend of the river (NK 08092 49836) where it was outcompeting native vegetation, posing a risk to bank stability during winter dieback and presenting a source of materials to allow spread further downstream. Some bank erosion was already apparent in the bend with a large chunk of the bank broken away and forming an island in the U bend. This added to the risk of Japanese knotweed stem fragments or rhizomes breaking away from the stand and spreading downstream.

It is not clear how or when the Japanese knotweed established at the site. There are no known stands of knotweed upstream of this site for many kilometres, with the only other known stand located in the upper reaches of the South Ugie water. Due in part to the infestation growing between the river and a fence line (so limiting disturbance), with no public access on the right bank, the knotweed had not spread extensively downstream. Only one small stand has established in the adjacent management site downstream, likely due to plant fragments or rhizomes being washed down.

The site was identified during surveys in 2018. The landowner was made aware and a treatment plan was formed for initial control work to be carried out by Scottish Invasive Species Initiative staff and a volunteer. The landowner agreed to undertake pesticide application training through the project and take on responsibility for the site going forward.

In 2018, treatment was undertaken for the first time by Scottish Invasive Species Initiative staff and a volunteer. Glyphosate (RoundUp ProVantage) was applied to the entire stand by foliar spray at a concentration of 20ml per litre. Annual foliar treatment was applied to any regrowth by the landowner in 2019, 2020 and 2021.  Over this period there was increasingly less regrowth, with only a few stunted stems apparent in 2021. The site will be checked in 2022 and necessary follow up treatment delivered by the landowner.

Table 1 below shows a summary of the control treatments each year.

Monitoring was undertaken at a single point at the site each year and the abundance of the Japanese knotweed was recorded using the DAFOR scale*.  The abundance of Japanese knotweed was recorded as ‘dominant’ in 2018, ‘occasional’ in 2019 and ‘rare’ in both 2020 and 2021, with only a few stunted stems re-growing in later years (see Figures 1a and 1b).

The abundance of invasive species was measured using the DAFOR scale and is shown in Table 2 below.

Foliar spray was delivered at a concentration of 20ml per litre using a backpack sprayer between 2018 and 2021. Table 3 (below) shows the total volume of glyphosate applied by year.

Control work was undertaken by Scottish Invasive Species Initiative staff and a volunteer in 2018. The landowner completed the follow up control work between 2019 and 2021.

Table 4 (below) shows effort in terms of hours spent on control per year at the site.

There has been a significant reduction of Japanese knotweed at the Upper Ugie Mainstem site since control work began in 2018.

This is demonstrated by the change in abundance of the plant at the site (see Figures 1a and 1b which visibly show a large reduction in Japanese knotweed) as well as the DAFOR abundance scores which have reduced from ‘dominant’ in 2018 to ‘rare’ in 2020 and 2021.

Control effort at the site has also significantly reduced between 2018 and 2021 in terms of both chemical volume used and hours spent on control work. Control effort has reduced by 87.5% and 97.5% respectively by these measures.

The scale of the Japanese knotweed infestation at the site has been significantly reduced between 2018 and 2021.  Remaining regrowth is more manageable in terms of the time and herbicide required for annual control. In addition, the risk of spread downstream is much reduced. The landowner, having gained their pesticide application qualifications through the Scottish Invasive Species Initiative, and has been able to take on responsibility for control and monitoring at the site.

With the landowner qualified and keen to carry out control of the remaining Japanese knotweed in the coming years, the continued management of the site is in hand.

In 2022, Scottish Invasive Species Initiative staff will liaise with the landowner to agree on a future management plan beyond the current project end date of March 2023.  As the annual effort required to protect the progress made in the last four years is low and an effective partnership with the landowner has been established we anticipate Japanese knotweed will be eradicated from the site in the coming years.