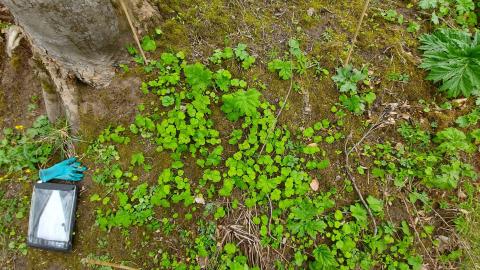 Emergence of Giant hogweed seedlings in the presence of simulated grazing

It appears that the emergence periods of giant hogweed seedlings vary between and across river catchments and geographic areas; yet there is currently no information available that looks at the extent or scale of difference across areas in Scotland.  By recording seedling emergence in a number of areas, an emergence curve for giant hogweed seedlings can be produced and we can better understand how much variation there is between sites across Scotland.

To do that, reliable records taken from a range of giant hogweed sites across a growing season are needed.  The records will be part of a wider study – initially and principally within the Scottish Invasive Species Initiative area – but which is hoped may extend in future to other areas to give a more refined assessment of emergence periods across Scotland and, potentially, beyond.

During 2021 there were 15 sites monitored for the full 8 months of the study (March - October). Each site contains at least three 1m2 plots and is known to have giant hogweed present.

The sites are visited on the first week of each month and various photographs and observations recorded. The number of giant hogweed seedlings are counted and removed from the plot.