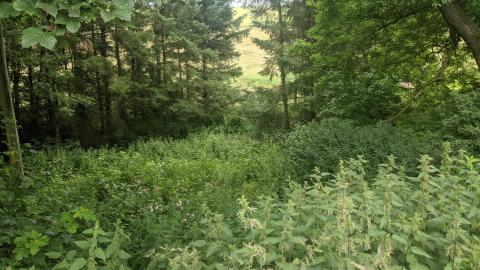 The North Ugie Water is a major tributary of the River Ugie which runs through the village of Strichen in Aberdeenshire.  Himalayan balsam, which had become established in the area around Strichen, was outcompeting native vegetation and increasing the risk of bank erosion.  As this area was identified as the most upstream source of Himalayan balsam on the North Ugie Water, control at this location would prevent further and ongoing spread downstream.

Three management sites are combined in this study which summarises control undertaken by landowners, Scottish Invasive Species Initiative staff, volunteers and the Aberdeenshire Community Payback team over approximately 2.9km of river length (5.8km of riverbank) over the period 2018-2021.

The four years of control had, by 2021, significantly reduced both the abundance of Himalayan balsam present and the time taken to complete annual control work.  In 2022 Scottish Invasive Species Initiative staff will coordinate a further year of control and monitoring whilst also seeking to secure agreements with landowners to deliver any further control to eradicate the plant after the project itself has ended.

The sites in this study are three contiguous sections (Ugie1, Ugie2 and Ugie3) of the North Ugie Water extending above, through and below the village of Strichen in Aberdeenshire (see Figure 1.)

The upper site (Ugie 1), which starts at Old Mill Farm (grid ref NJ 9393 5617) and ends at the bridge in the middle of Strichen (grid ref NJ 9456 5504), is approximately 1.4km in length and, is owned in the main by a single local land manager and a small number of individuals.  The second site (Ugie 2), which starts at the above mentioned bridge and extends approximately 0.6km through the town to the Aberdeenshire Council depot (grid ref NJ95005468), is owned by private individuals and includes a section where landownership could not be established.  The lower site (Ugie 3), which extends approximately 0.9km from the depot downstream to a poultry farm (grid ref NJ95505409), is owned by a local farmer. 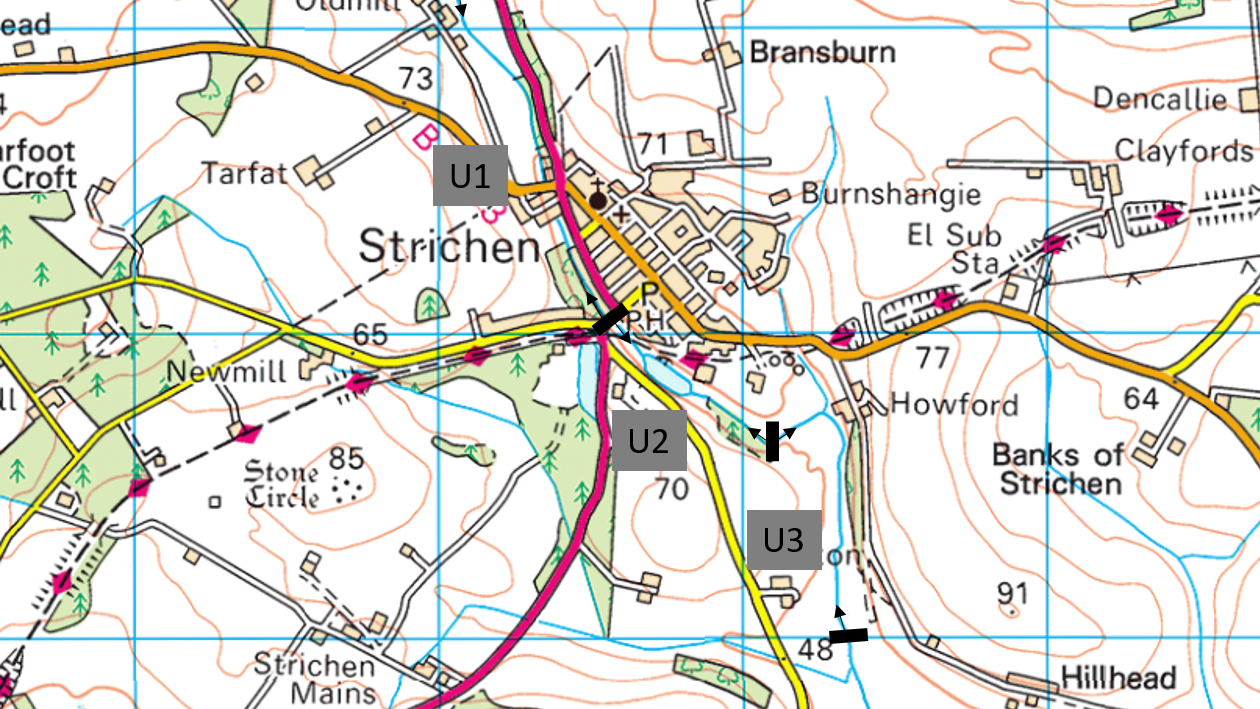 In total these sections extend to approximately 2.9km of river length and have been managed collectively under the co-ordination of the Scottish Invasive Species Initiative to control Himalayan balsam on both banks of the river – a total of 5.8km of riverbank under management.

Within the Scottish Invasive Species Initiative partnership the Ugie catchment is covered by the Deveron, Bogie and Isla Rivers Charitable Trust (DBIRCT).

The sites have a variety of bankside land use including conifer plantation, deciduous woodland, pastures, unimproved grasslands and arable fields and residential gardens bordering the river.

The upper limit of the site marks the uppermost extent of Himalayan balsam on the North Ugie Water – the plant having escaped from a farm garden and spread and established to varying degrees downstream throughout the three sites.

In 2018, Himalayan balsam had become the most abundant species in some areas whilst elsewhere it grew amongst other bankside vegetation..  If left unchecked the likelihood was that the species would both spread further downstream from Strichen and further dominate these current locations.

In the worst areas, the balsam was successfully outcompeting native flora and leaving banks vulnerable to erosion when winter die back exposed bare soils.  The small footpath within the site also provided an opportunity for further spread from people inadvertently picking up seeds and transporting them to new locations.

Once made aware of the Himalayan balsam problem by project staff - and the importance of tackling existing infestations and halting further spread downstream - the two major landowners agreed to work with the Scottish Invasive Species Initiative to tackle the plant and halt its spread.  In the section of unknown ownership project staff, individual volunteers and a group from the Aberdeenshire Council Community Payback completed control work.

These collaborations ensured that all parties were reassured that their work was meaningful when combined with work elsewhere.  In particular, working in this way helped ensure that the most downstream landowner (likely to be recipient of seeds and materials for upstream) remained committed to the control scheme.

The Himalayan balsam was treated for the first time in 2018 at Ugie 1 and Ugie 3 with control at Ugie 2 starting in 2019.  A range of physical control techniques were used at all sites - dense stands were controlled using mechanical cutting (strimming) and hand cutting (slashing with ‘weed whackers’), while less dense areas were pulled by hand to ensure native vegetation was not damaged and left in place to recolonise.

In 2020 and 2021, when the density and coverage of Himalayan balsam had been reduced, hand pulling was the main means of control applied to the remaining clusters of growth.

Table 1-3 below shows a summary of the control treatments deployed.

The abundance of invasive species was measured using the DAFOR scale*.  The recorded abundances are shown in Table 4 below.

Following control in each year from 2018/2019 to 2021 a reduction in abundance was observed as the seedbank was depleted.  By 2021 the abundance of the Himalayan balsam was reduced down to ‘rare’ or ‘not present’ at every monitoring point.

This was also observed in the change on the ground (see Figure 2). 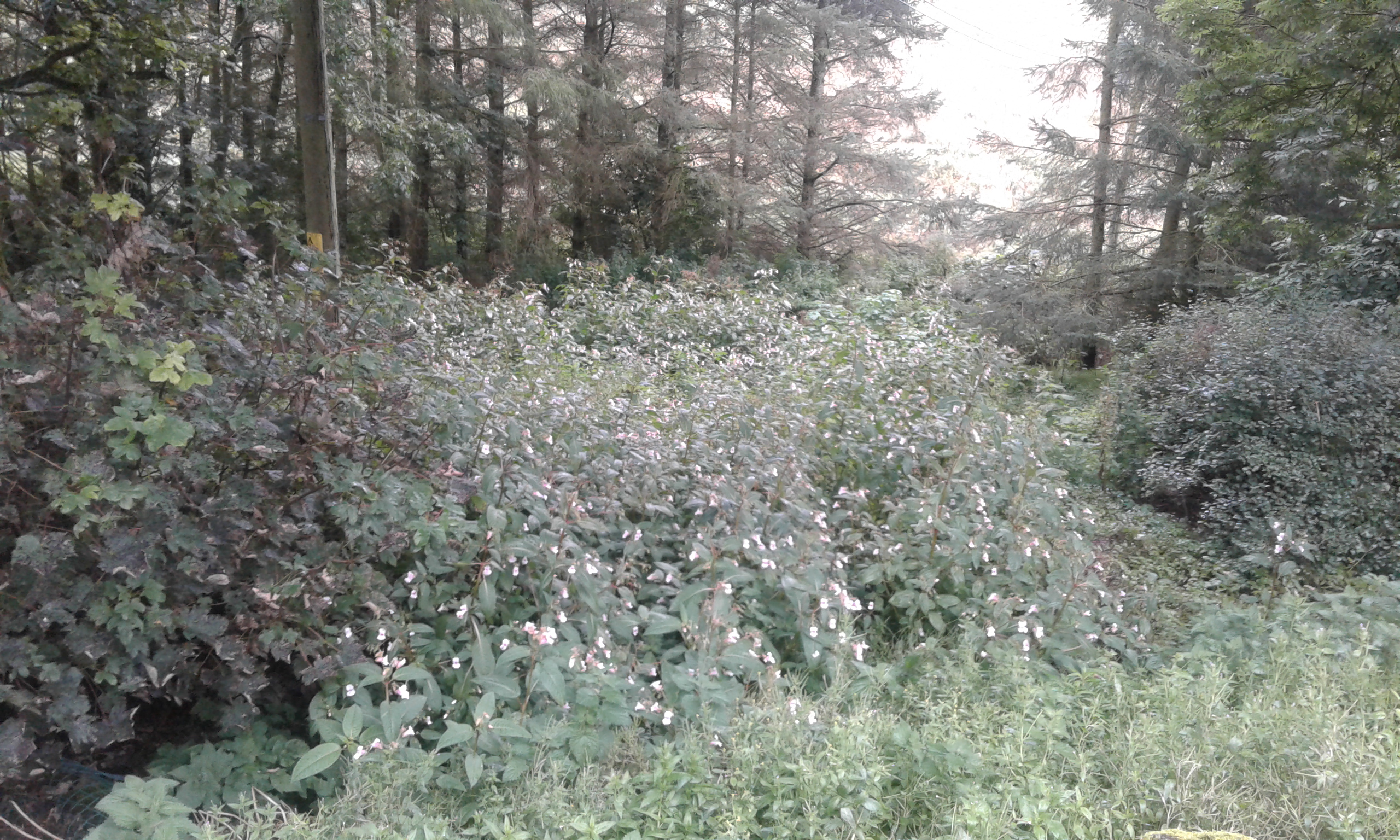 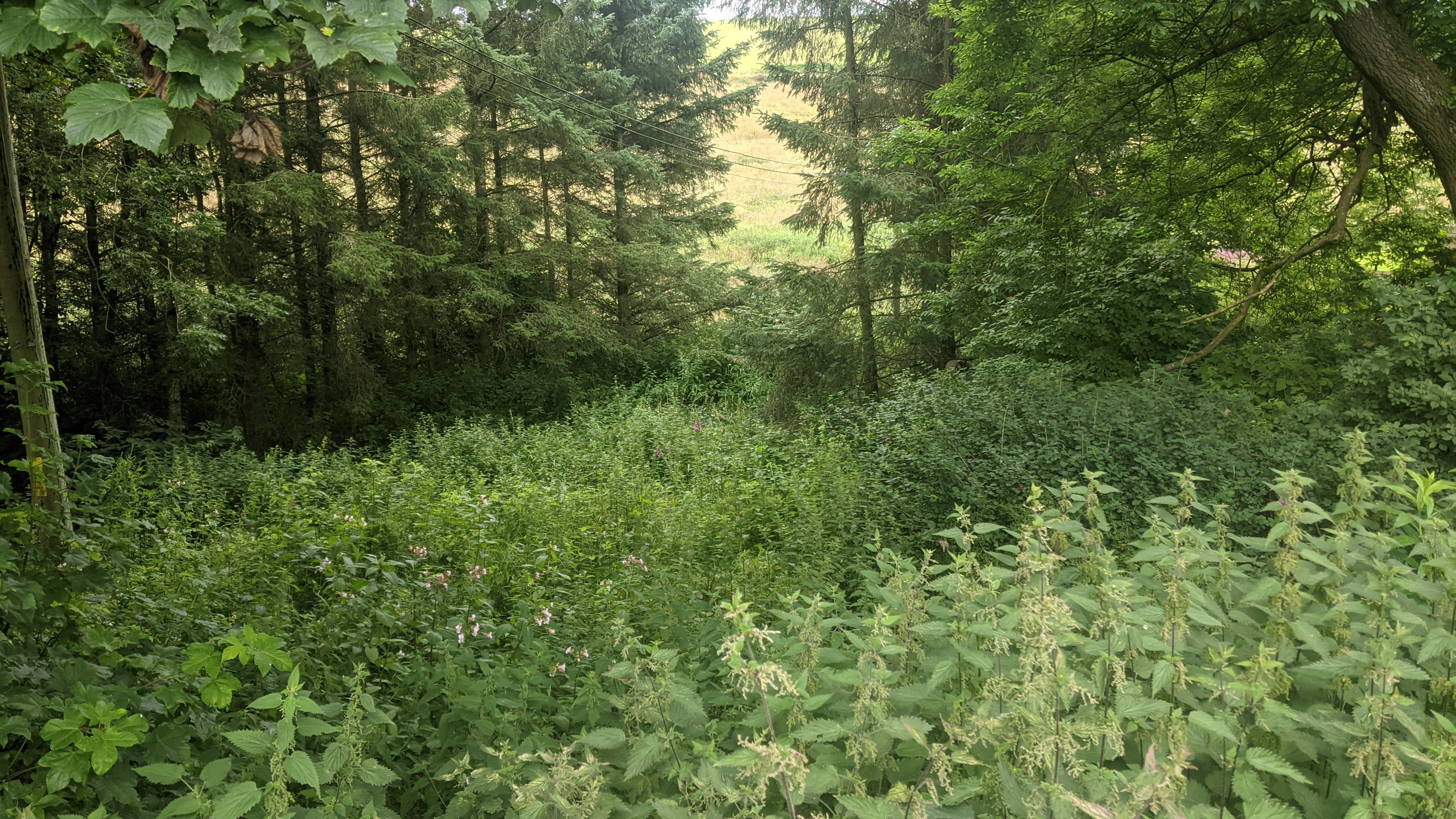 People effort
Control work, undertaken by land managers and project staff, started in the upper (Ugie 1) and lower (Ugie 3) reaches of the site in 2018 and continued each year until 2021, with additional help of volunteers in upper reaches (Ugie 1) and the land manager working under their own initiative in the lower reaches (Ugie 3).  In 2019, the middle section (Ugie 2) was controlled for the first time by project staff and the help of the Aberdeenshire Community Payback team joining the effort. Control in Ugie 2 continued in 2020, carried out by project staff, and in 2021 by project staff with the additional help of a volunteer. The control work carried out in the upper and middle reaches was essential in order to engage the land manager of the lower reaches to actively carry out annual control – as this upstream work reduced and prevented prevent downstream seed dispersal onto their land.

After the large collective effort in 2019 to bring all sites under control reduced effort was required in 2020 and 2021 to maintain control – even though work had switched to the slower hand pulling method.

Table 5 (below) shows the effort in terms of hours of control work spent on site.

Work to control Himalayan balsam on the North Ugie Water around Strichen since 2018 has significantly reduced both the abundance of the plant at the site and the effort required to deliver annual control.

This is demonstrated by the change in abundance of the plant observed (see Figures 2) – which show notable reductions in the extent of Himalayan balsam present – and in the DAFOR scores at monitored points which recorded a reduction in abundance across all the monitoring point which by 2021 were all down to ‘rare’ or ‘not present’ state (see Table 4).

Progress is also shown by the reduction on the hours of work needed to treat the balsam across the site – particularly from 2019 to 2021 when the same and full extent of river length was under management.  From 2019 to 2021 the hours of control required reduced by 91%.

In 2018 and 2019 strimmers and ‘weed whackers’ were used to deal with the most heavily infested areas.  In 2020 and 2021, when the scale of balsam growth had been reduced, hand pulling only was required across the site – this is a more selective control method which prevents damage to non-target vegetation.

By reducing the scale of Himalayan balsam growth around Strichen eradication of the plant from the North Ugie Water is now achievable and the risk of further downstream spread has been reduced.  These sites highlight the importance of control work being carried out from the uppermost extent of infestation in a downstream direction - to prevent further spread and also effectively engage land managers in the lower reaches in such collective efforts.  Downstream managers will be less likely to carry out control on their land if there is no reduction or prevention of continuous seed dispersal to them from upper uncontrolled areas.

Engagement with landowners and volunteers will be maintained in 2022 to ensure monitoring and control is completed to continue the progress made to date.

In 2022 Himalayan balsam monitoring and control will be delivered around Strichen by the Scottish Invasive Species Initiative staff with landowners and volunteers to further reduce the abundance of the plant here and prevent any remaining plants seeding.

Alongside this work dialogue will be continued with land managers which will seek to voluntarily transfer the responsibility for ongoing control beyond 2022 to them.  Now that the scale of the problem is reduced the effort to continue management work at the site is also reduced and more deliverable.

If secured such agreements would provide a sustainable solution to the Himalayan balsam infestation on the North Ugie Water and, ultimately, seek to eradicate the plant from this part of the River Ugie catchment.