When do giant hogweed plants emerge in Scotland? 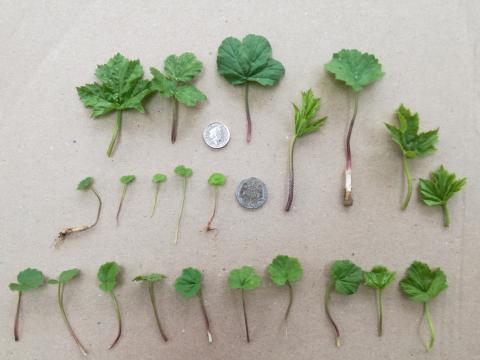 Giant hogweed is an invasive non-native plant that is widely spread across Scotland. The Scottish Invasive Species Initiative has been managing and controlling this plant across the north of Scotland since 2018.  Whilst methods of control for giant hogweed are generally known there is little information and data detailing the timing of giant hogweed seedling emergence in Scotland.  This information would be helpful in ensuring that control work is delivered at the optimal time of year to make management most effective and impactful.

To address this knowledge gap the Scottish Invasive Species Initiative, with the help of volunteers, ran a seedling emergence study from March to October 2021. Data was gathered on giant hogweed seedling emergence across 10 different river catchments in the north-east of Scotland. Participants marked out 1m2 plots and recorded the number of seedlings emerging in these plots per month. In total, 13 people participated in the study monitoring 49 plots across 14 sites. Seedling emergence was high in March, peaked in April and May, then steadily declined until October.

Results from this study will help to inform seasonal management plans for giant hogweed control, including our sheep grazing trial near Macduff at the bottom of the River Deveron catchment.

The Scottish Invasive Species Initiative, in partnership with the University of Aberdeen, has been running a trial since 2019 to investigate the feasibility of controlling giant hogweed through sheep grazing.  Two factors which are critical to the establishment of a successful grazing regime are:

However, the grazing pressure deployed to the giant hogweed must correlate with the timing of giant hogweed emergence to be most successful.

This study investigated the timing of seedling emergence over the anticipated growing period (March-October). Results from this study will help to inform the preparation of guidance for land managers who are interested in implementing sheep grazing as a control method for giant hogweed.

The study sites were spread across 10 different river catchments and incorporated a variety of altitudes and habitat types (see Table 1 below). Canopy cover was recorded at each site visit and varied seasonally and across plots - both within and between sites - from open to partial shade to full shade.

Not all participants were able to visit all plots every month. Table 2 (below) shows the number of plots that were visited per month.  From March to September, 43 to 49 plots were visited each month (out of 49 total).  However, in October only 34 plots were visited – weather conditions were more challenging at this time of year and some plots could not be visited due to site conditions or volunteer availability.

Table 2: The number of plots visited per month. There were 49 plots in total across 14 study sites.

We recognise that variation in the number of plots visited per month could influence the seedling emergence curve in Figure 5, which is prepared using the total number of seedlings removed across all plots by month. Therefore, we have included the average number of seedlings removed per plot per month in Figure 6, to account for this variation. Regardless, both figures show the same clear pattern of seedling emergence over the study period.

Images from each sample plot were taken at each monthly visit.  An example of these is shown in Figure 7 - this provides visual confirmation of the increase in hogweed seedling emergence between site visits in March and May.  An example set of monthly images across the study period (March to October) for a plot on the River Lossie in Moray is shown in Appendix 2 to show the observed changes in seedling abundance in this time.

Figure 7: Typical seedling emergence pattern in a 1m2 plot in spring. Images taken in March (left) and May (right) from a plot in the River Lossie catchment in Moray.

The seedling emergence curve shown in Figures 5 and 6 shows a clear seasonal pattern of emergence. Significant numbers of giant hogweed seedlings emerge in early spring (March) and probably in advance of this in February and, perhaps, January.  From March emergence levels increase in April to a peak in May.  After May emergence declines steadily in June and is low from July onwards. Seedlings continue to emerge until October but by this time of year total seedling emergence is minimal.

It is generally advised that the best time of year to treat hogweed by herbicide application is May and June.  In July and early August, any remaining flowering heads should be removed before they go to seed to prevent further seed dispersal and potential establishment to new locations. Findings from this study support this typical control timeline as the study found peak seedling emergence to be in April and May.

The study found a significant number of giant hogweed seedlings had already emerged across the study site by the first week of March. It is likely that many of these emerged in February (and in some instances perhaps even in January). However, this does not conflict with the normal chemical treatment window in May and June.  Early emerging seedlings would not flower before this typical treatment window and delaying treatment until this time ensures that the majority of seedlings likely to emerge in the growing season have done so and are large enough to be visible and identifiable for treatment. Similarly, seedlings emerging after this treatment window would not flower or seed within the same season and so would not be able to replenish the existing seedbank or disperse further to new locations.

This study found that giant hogweed emergence peaks in April and May.  Whilst we recognise that this study has been undertaken for one growing season only, and was not replicated across all of Scotland, it was able to include various site conditions (river catchment, altitude, habitat type, tree canopy cover) and so we are confident our results are applicable in varied circumstances and at least for the majority of conditions and locations across Scotland.  Therefore, there is some confidence that this finding is sufficiently robust to confirm the most appropriate period for chemical application (or grazing pressure) to emerging seedlings in each growing season.

Whilst this study could be replicated and expanded to further investigate seasonal seedling emergence, we are confident that the work to date is sufficient to inform practical management application.

Related to this study, the Scottish Invasive Species Initiative is undertaking a trial to deploy sheep grazing to control giant hogweed.  Information on this work is available here.  We will use the findings of the giant hogweed seedling emergence study to inform the guidance we are preparing on the use of sheep grazing as a method of giant hogweed control.

In order to deliver effective control through sheep grazing, it is important to know the optimal time of year for grazing to begin and end.  In our grazing trial, we are likely to advise that sheep are released onto a site at the beginning of May and removed at the end of August.  The seedling emergence study reported here supports this advice.

Releasing sheep to a site at the beginning of May will ensure that:

Furthermore, continuing grazing until the end of August will ensure that seedlings emerging over the May to August period can be grazed effectively. Any plants remaining after grazing has been stopped will not be able to flower and seed, remain relatively small and be available to graze in the following season.

Although not related to seedling emergence our grazing period advice also helps to both reduce the risk of overgrazing of native flora at each site and of poaching of the ground - the latter more likely if winter grazing is undertaken.

We would like to thank the volunteers and project partner staff who participated in this study. The Scottish Invasive Species Initiative is a volunteer-based project and, as always, this work would not have been possible without the help of our partners and volunteers.

The data collection for this study was co-ordinated by Karen Muller, Project Officer for the Deveron, Bogie and Isla Rivers Charitable Trust, with the report produced by Karen Muller, Jane Hamilton (Volunteer and Communications Officer) and Callum Sinclair (Project Manager).

Typical seedling emergence pattern in a 1m2 plot throughout the duration of the study (March – October 2021). Images taken from a plot in the River Lossie catchment in Moray.